Majority of Android smartphones bought over holidays were phablets, according to analytics firm

According to a new report by analytics firm, Flurry, more Android phablets were activated than any other sized Google-powered smartphones. In fact, if the companies app-tracking tools are accurate, half of all Android activations over the holidays were large-screened mobiles…

While the report doesn’t say exactly what classes as a ‘phablet’, we’re assuming they’re going based on any smartphones with a screen measuring at least 5.5-inches diagonally. While it’s certainly an indication that the market is warming to the bigger mobile devices, it should also come as no surprise to anyone watching the industry over the past couple of years.

Over that past 12-24 months, most manufacturers have failed to build smaller devices with the same powerful components and specifications found in the much larger devices. In fact, perhaps only Sony and OnePlus spring to mind from the past year with the Xperia Z5 Compact and OnePlus X respectively. For those customers wanting a great experience in a smaller package, the options are limited on Android, perhaps a big reason why so many (65%) of Apple’s iOS sales were ‘medium phones’. 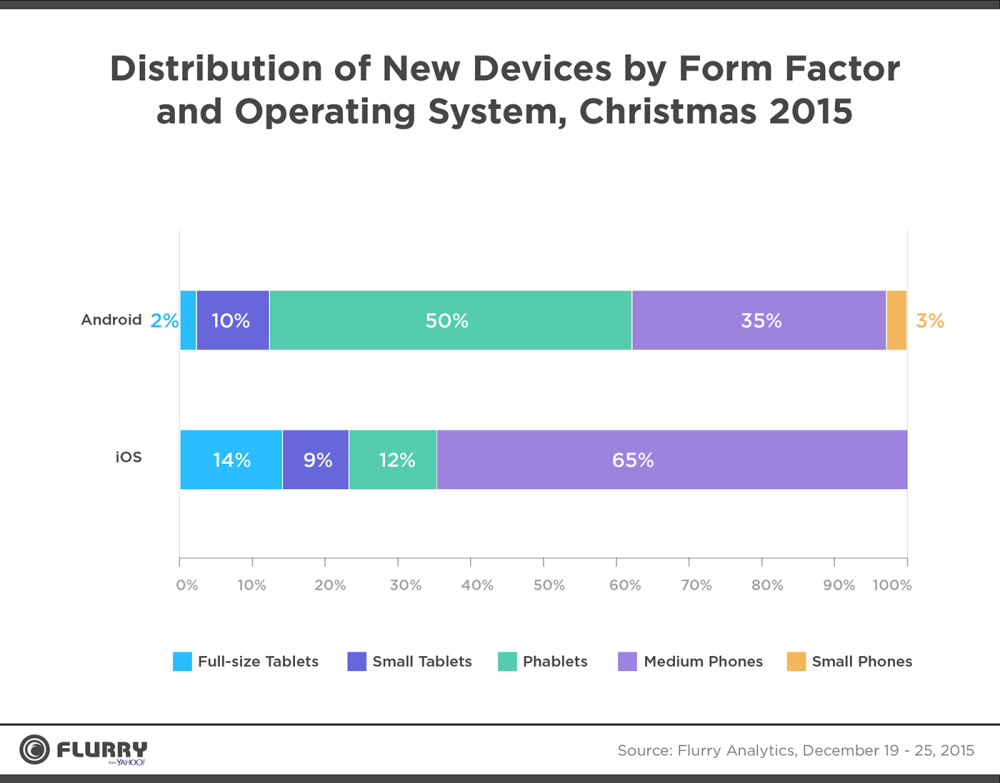 Just thinking through some of this year’s flagship smartphones from big manufacturers, only the Samsung Galaxy S6 and HTC One M9 have a screen smaller than 5.5-inches. The LG G4, Sony Xperia Z5, OnePlus 2, Motorola Moto X Pure/Style, Samsung Galaxy Note 5, Galaxy S6 Edge Plus, Huawei Nexus 6P and ASUS ZenFone 2 are among some of the most popular phones of the year, all of which have a phablet-sized display. It would be very interesting to see what this distribution would look like if each manufacturer released a smaller alternative with high-performance components.

Although Android phones are still popular, no single manufacturer managed to come close to Apple’s dominance in holiday activations. 49.1% of activations were iOS devices, with the closest competitor being Samsung with 19.8%.

This marks the first year Android phablets have sold and been activated more than other-sized smartphones and marks a shift in mentality among consumers. What would once have been considered far too big to even contemplate buying as a phone is the new normal.