Not long ago,  Xiaomi’s co-founder indicated we should expect to see its next flagship, the Mi 5, launch sometime after the Spring Festival (also known as Chinese New Year). The only other fact we knew for sure was that it will be powered by Qualcomm’s newest processor, the Snapdragon 820, which is being built using Samsung’s 14nm FinFET process.

While there’s no guarantee that these are definitive, or accurate, there have been a couple more leaks pointing towards what we should expect from the Mi 5 and when we should expect to see it…

First off, Gearbest — an online store which specializes in importing Chinese/Asian smartphones into western markets — has a few placeholders ready for the Mi 5. And although you can’t pre-order from them yet, you can sign up for updates. If you submit your email address, the site will inform you when the device lands in stock.

These placeholders suggest we should be looking forward to two different storage options: 16GB and 64GB. Interestingly, the site also suggests that both will be equipped with a generous 4GB RAM.

If the listings are accurate, we’ll see a Snapdragon 820-powered phone with a 5.2-inch Quad HD (2560 x 1440) resolution display coated in 2.5D Corning Gorilla Glass 4. It’ll also allegedly feature a high resolution 8MP camera on the front, and a 6-element 16MP camera on the back with f/2.2 aperture and 4K video recording capabilities.

You should also be able to unlock the phone using the rear-mounted fingerprint sensor, and it will come equipped with a 3,600mAh battery. We also expect to see it in black, white/silver and gold color options. 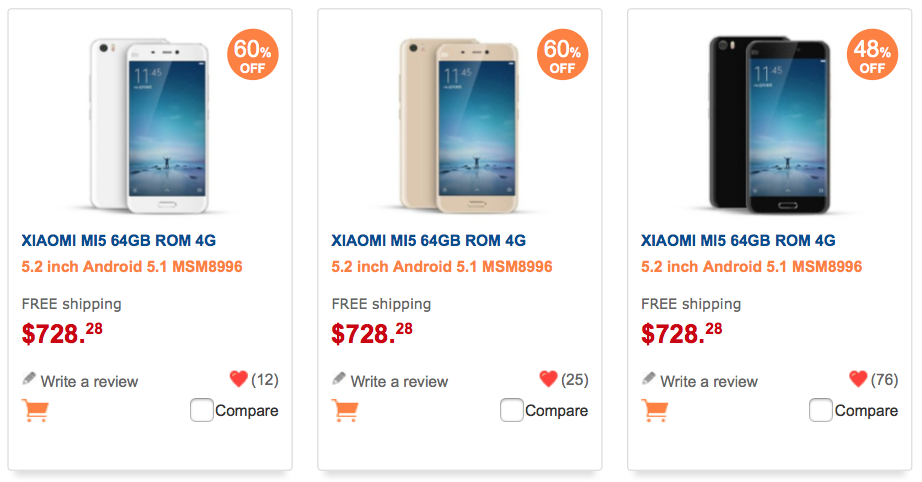 Xiaomi’s chief already stated that manufacturing was ramping up to ensure there were enough phones made by the time the company plans to launch. Another member of Chinese social networking site, Weibo, corroborates those statements with a picture of a banner up at a Foxconn plant where the phones are being manufactured. It’s claimed that workers are having to do overtime to ensure enough of the smartphones are made.

We still don’t have an exact date for retail launch, although it has been suggested it could be around February 20-21. The Gearbest listings don’t appear to offer a definitive arrival time. But, with production going full stream ahead, it would be wise to expect the phone to launch sooner, rather than later.