At the tail end of this year’s MWC, OnePlus founder Carl Pei revealed that the company’s next flagship will launch at the end of the 2nd quarter. In addition to having a “captivating” design, we now (might) know some of the device’s specs thanks to a benchmark from AnTuTu…

Refereed to as the OnePlus A3000, the device is listed with a Snapdragon 820 processor, 4GB of RAM, and 32GB of storage. Unfortunately the 1920 x 1080 full HD display does not come listed with a screen size, and the “8MP + 16MP” could either refer to a dual-camera setup or front and rear facing cameras. The device will presumably run their Oxygen OS skin on top of Android 6.0.1.

Presuming OnePlus sticks to their model of high-end specs at affordable prices, the OnePlus 3 will be in line with this year’s flagship devices, even if it is released 3 months from now. In the interview, Pei noted how the OnePlus 2 had a lackluster design and that their upcoming device will try to capture the excitement around the original device. In our own Cam’s opinion, the company would do well by taking more design cues from their lower-end OnePlus X.

According to the aforementioned interview, the next device will resort to more traditional marketing methods and have a “better buying process.” Regardless, the device will still be sold unlocked and directly from OnePlus. 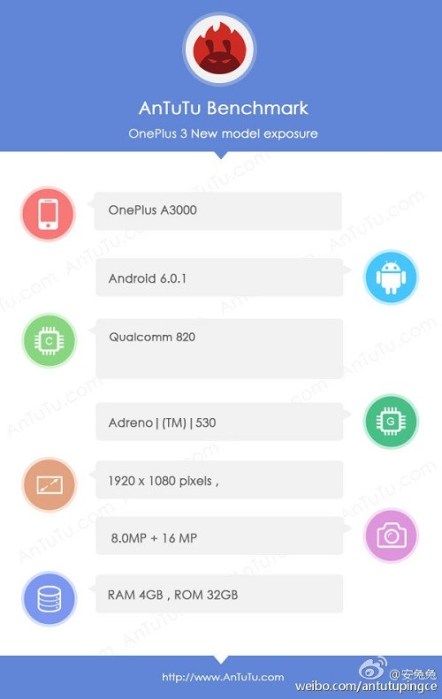