A few months ago Google launched a free high-speed public WiFi network in Mumbai Central Station, and now the company announced that similar networks are coming to nine more train stations across India.

If you’re one of the 1.5 million people who travel through Bhopal, Bhubaneshwar,Ernakulam Jn, Kacheguda, Pune, Raipur, Ranchi, Vijayawada and Vishakhapatnamtrain stations everyday, you’re in luck! While you wait for your train, you can now look forward to free high-speed Wi-Fi, hopefully making that wait a bit more enjoyable and productive.

Google has also mentioned that more than 100,000 people are already using the high-speed Wi-Fi every week. And while it’s not clear how fast this internet connection is, Google says that users should be able to “easily stream an HD video, research their destination, or download a new book or game for their journey ahead.” For now these connections are free, but Google has said it has plans to make the service sustainable in the future.

Back in November of last year, Re/code’s Mark Bergen profiled Google’s/Alphabet’s ‘Access and Energy’ group, which includes a lot of projects and products focused on helping bring people online. Of course Google Fiber falls into this category, but so does Project Link, Project Sunroof, Project Titan, the consumer OnHub router product, and this RailTel partnership that first brought WiFi to Mumbai Central Station.

Recently, Google CEO Sundar Pichai revealed plans for the company’s renewed focus on India. As we reported, part of that plan is ensuring that India can get access to high-speed internet, especially when traveling on the nation’s rail services. Sundar Pichai said in December of last year that it would be offering WiFi at 100 train stations in the country next year, starting with Mumbai Central. A further 300 stations — these being nine of them — will follow.

Here’s a map of the first 100 railway stations set to get free WiFi: 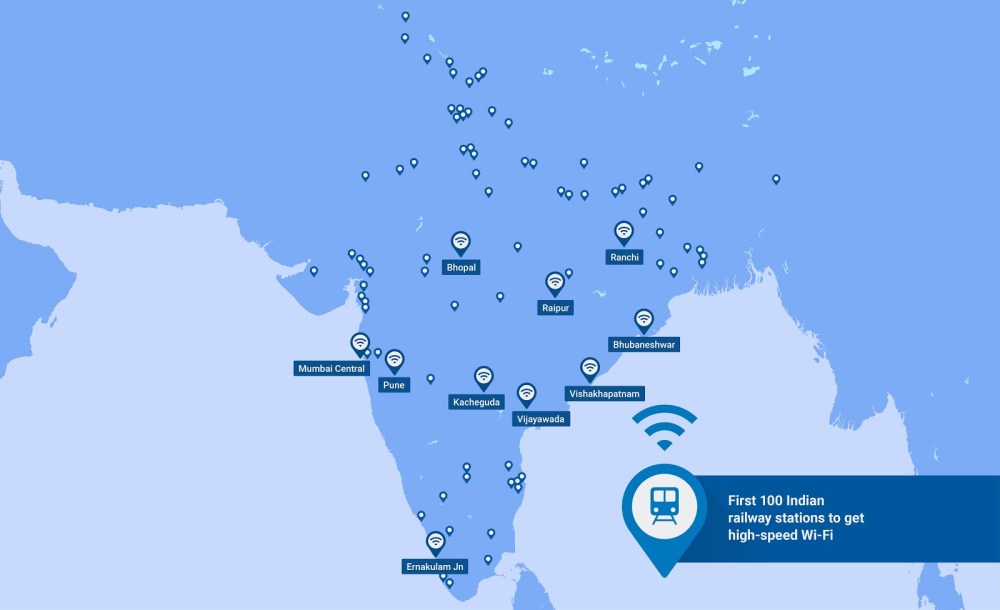