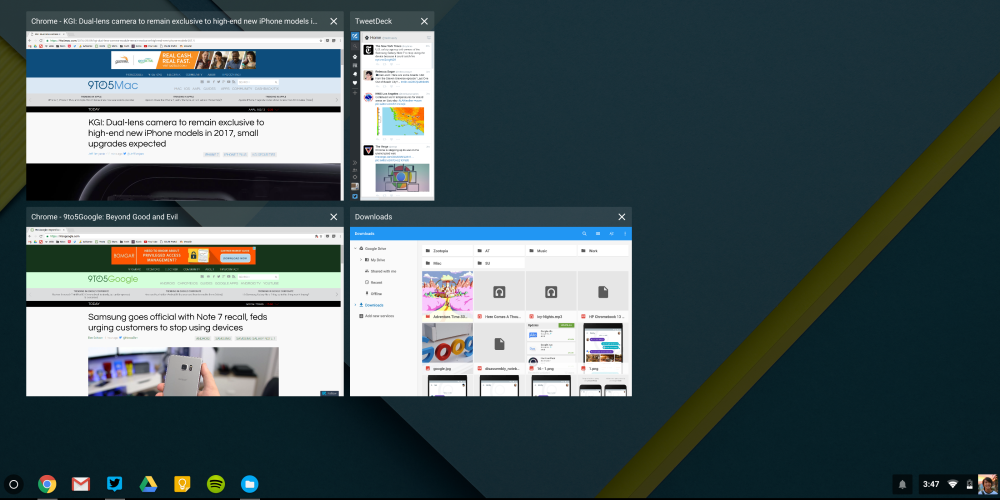 After rolling out to Mac, Windows, and Linux last week, Chrome OS 53 has just hit the stable channel with a Material redesign of the overview mode. While Android apps were expected to arrive with version 53, the feature has been delayed for the three Chromebooks that already have the Play Store.

The overview mode allows you to get a view of all your open windows and can be accessed via the shortcut row or a three finger swipe up on the trackpad. In addition to Material stylings, the view takes better advantage of the screen real estate and provides better labeling. Additionally, arrow keys can now be used to navigate through windows.

In Settings, there is a more detailed storage manager that breaks down used space into downloads, offline files, Android storage, and more. This version also better highlights accessibility features and has a new app API to enable watchdog behavior in kiosk apps and SAML SSO for Chrome Apps.

Occasionally, the latest version of Chrome OS will be held back for certain devices. The three Chromebooks that already have access to the Play Store are not yet being updated to version 53. After using Android apps on the beta channel for quite some time, the OS in general still occasionally suffers crashes and weird graphical bugs. However, a final release is probably not too far out.