Since Samsung announced the recall of its Galaxy Note 7, we’ve seen several terrifying reports of the explosions causing houses fires, destroying cars, and even burning the hands of young children (thankfully that last one was exaggerated). Just last night a video came out showing a car ablaze allegedly thanks to a Note 7 explosion. Things aren’t going to get better until people stop using the device; however, as new data suggests, they aren’t…

Apteligent has released data showing the rough adoption/usage rate of the Galaxy Note 7. As you can see below, that rate dropped sharply after the Note 7’s recall was official. Shortly after that, the adoption rate rose just a bit and then dropped yet again.

The cause for this is obvious. Sales of the Note 7 were stopping, and customers weren’t able to buy the phone. What is concerning here is that after the initial drop, the adoption rate went right back up and by this past weekend, the numbers were the same as before the recall. That would suggest that there are plenty of ticking time bombs just sitting around waiting to wreak havoc.

As a quick disclaimer, though, this data is definitely not a perfect representation of what is actually happening in the real world. Apteligent gathers this data through worldwide app data on mobile platforms, allowing us nothing more than a decent indication of what is going on in the bigger picture. Let’s hope, for the safety of many, that this doesn’t represent the number of people who are exchanging their phones. 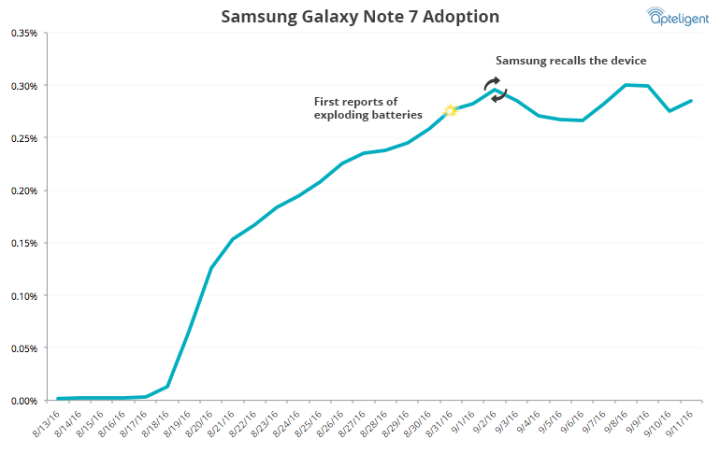