One user’s replacement Note 7 blew up early last week, Samsung tried to ‘slow him down’

Reports of a replacement Galaxy Note 7 catching fire surfaced on Wednesdsay when a Soutwest flight was evacuated during boarding. However, a new story points to Samsung being aware of a possible replacement device catching fire one day earlier in Nicholasville, Kentucky and trying to “slow” down the affected customer…

At 4 AM on Tuesday, Michael Klering and his wife woke to “a hissing sound in their bedroom.” A replacement Galaxy Note 7 — received a week earlier — was on fire and had filled the room with smoke. Notably, the device was not plugged in and just sitting on a table. Later in the day, Klering was brought into the hospital for smoke inhalation and later diagnosed with acute bronchitis.

In contact with Samsung, the company wanted to take possession of the phone, but Klering refused. Samsung did pay to have the phone x-rayed. Up to that point, Klering “felt Samsung was helping him.” However, the Kentucky man later received an unintended text from a Samsung representative:

Just now got this. I can try and slow him down if we think it will matter, or we just let him do what he keeps threatening to do and see if he does it

It’s not clear if local news station WKYT verified that Klering’s Note 7 was a replacement unit, but this is possibly the third case following a 13 year old girl being burned and injured by a replacement device. This latest incident comes as all four major US carriers are now allowing device exchanges, with AT&T considering droping sales entirely. 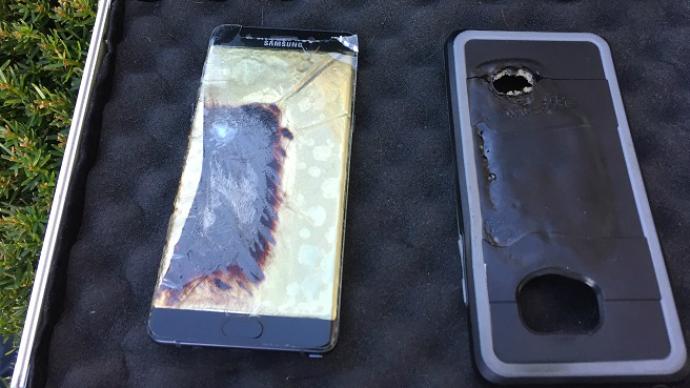