Compared to previous Nexus generations, Google and its carrier partners are doing significantly more advertising around the Pixel and Pixel XL. Both have better adoption than last year’s phone according to mobile marketing firm Appboy, but rates could be higher if it were not for constrained supply.

Appboy’s data comes from an analysis of 100+ million daily app devices from October 20-27. It shows the Pixel reaching 0.016% of market share and the Pixel XL 0.020% one week after release. In comparison, it took the Nexus 6P over two weeks to reach a similar level.

Growth would likely be higher if not for limited Pixel stock from both Google and Verizon. With the largest increase in adoption rate typically being the day following release, the Pixel XL observed a smaller than expected increase. This is likely due to XL models being sold out first on the Google Store and Verizon.

Instead, a surprising spike occurred on October 25, in line with when more preordered devices shipped and reached customers. In all, volume grew by 274% for the Pixel and 158% for the XL one week after launch.

Compared to Samsung, Google’s first wholly made device has a better growth rate at the moment. The Galaxy S6 and S7 only saw 104% and 171% growth during the same weeklong period. While impressive, adoption pales in comparison to established manufacturers. Both of Samsung’s previous Galaxy flagships reached greater market share in the first day than the Pixel and Pixel XL did in a week. 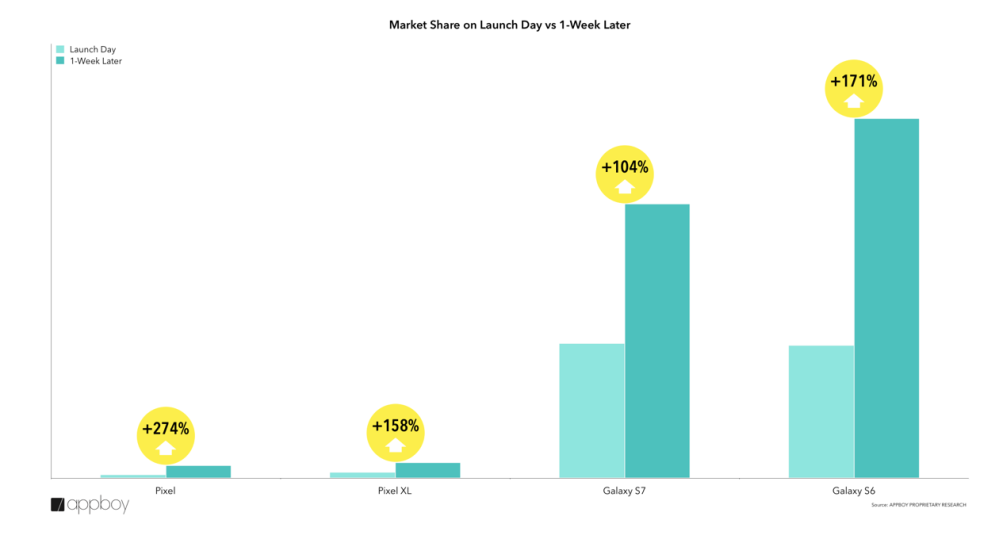