One of the big advantages of the Google Play Store on Chrome OS is the hundreds of thousands of extra apps that it brings to the OS. Among those apps is Microsoft’s Office suite. Office has long been a downside for many users for Chromebooks, but this addition takes that cause for concern away, or at least it did…

According to multiple users on Reddit, some of Microsoft’s Office apps on the Play Store are being blocked including Word, Excel, PowerPoint, and OneNote. On the Play Store listing the usual “unsupported on my device” message will pop up and block the install.

So far it doesn’t seem like this is happening with all Chromebooks; we’ve already confirmed that the Acer R13 (pictured below) still shows these apps as compatible. However, Reddit users are reporting that the ASUS Flip — one of four Chromebooks that are currently compatible with Android apps — lists the apps as incompatible.

Why is this happening? It’s probably Microsoft’s doing. It’s possible that the company is simply blocking machines they deem unfit for running those apps, but seeing that the ASUS Flip is a premiere Chrome OS device with respectable and powerful specifications, it seems odd that Microsoft would block it. In the end, it’s probably just about the competition. 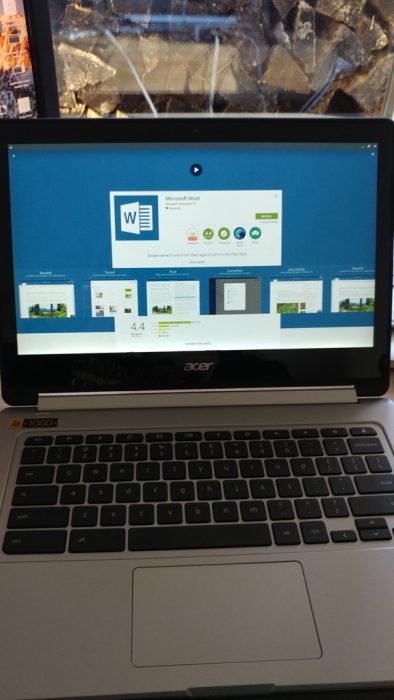 Anyone who already had these apps installed won’t notice any difference, they’ll just be blocked from reinstalling the app later on and updates won’t come via Google Play. Users can, of course, still sideload APKs of these apps by hopping into developer mode (note: not channel) and allow installations from unknown sources.

Update: As it turns out, Office for Android will be supported on Chrome OS devices, but with a caveat. You can learn more about that here.