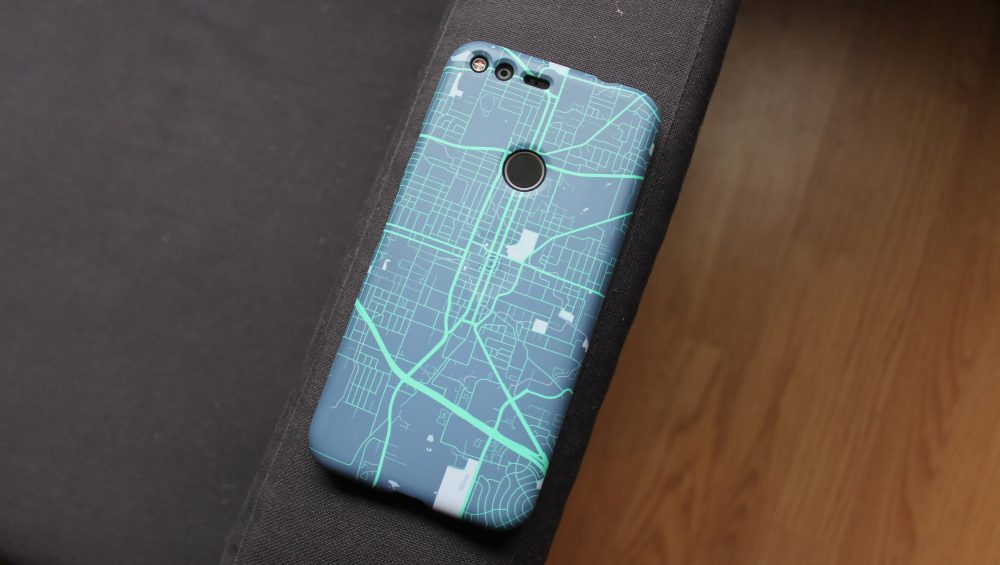 We took an in-depth look at the Google Pixel last month, but something you might not have known was that around that time I also went ahead and ordered a Google Pixel XL “Places” Live Case from the Google Store. Today that case arrived at my doorstep, and it being my first Live Case — I didn’t grab one for the Nexus 6P/5X — I thought I’d share a few thoughts…

First of all, I have to touch on the My Live Case app that goes with the case. After you take the case out of the box, it asks you to unlock your phone and tap and hold the shortcut button on the back. This pulls up the My Live Case Play Store listing, and after you have it up and running, it sets your wallpaper to match your Live Case. Along with that, the app lets you customize and add a blur to your wallpaper, and — of course — choose what exactly that shortcut button on the back does.

By default — at least with the Places case; I can’t speak for the others — the Live Case is set to pull up places around you when you tap and hold the shortcut button. You can also set it to open the camera, turn on and off WiFi, launch an app, toggle the flashlight, or disable it completely. I went with flashlight.

As for the button itself, well, I’m underwhelmed. I’ve heard from people who have the Nexus 6P Live Case that they don’t really use the shortcut button, and now I understand why. It’s in an awkward place — especially compared to the comfortable position of the fingerprint sensor — and it’s hard to press. You kind of have to stretch to reach it with your finger, and then you have to press it really hard and hold it down for it to trigger. On top of that, it doesn’t work unless the phone is unlocked. In short, I think the shortcut button is going to prove mostly useless for me. That’s disappointing.

As for the design of this Places Live Case, I’m pretty happy. It’s pretty cool that you can just drag around a Google Maps map and pick location you want to slap on the back (in this case, I chose a generic centralized map of my town in Texas). You get a variety of colors to pick from to theme this case, and I went with this darker green and blue combo in an attempt to match the black Pixel XL. It’s just cool. I’m not sure if it’s $40 cool, but it will almost certainly have people asking about it.

In terms of build quality and protection, though, the case you’re getting isn’t much different than a plastic case you could find on Amazon for $10 or less. It feels like a pretty average-quality plastic, and there’s no protection on the top and bottom. It’s definitely thick enough to perhaps save your phone from some bumps and bruises, but I don’t want to drop the phone any more with the case on it because of how much this case costs. Beating up the case would kill the good/unique looks.

Overall, I’m pretty on the fence about recommending this case. If you want to build a custom case for your Pixel or Pixel XL, grabbing a Photos or Places Live Case is almost certainly the way to go (although there’s not really any way to escape the $40 price tag). But if you’re willing to settle for a case that’s perhaps a bit more bulky and comes in some more generic designs, you can probably save about $20 going with a case from a company like Spigen. Or if you want customization without the protection, maybe a skin from the likes of dbrand would do you well.

If you think the Live Case is going to change how you use your phone because of its NFC button, I’m sad to report that you’re probably wrong. But if you don’t mind shelling out $40 for a case and you desperately want a fully-customized look for your Pixel, go for it. What you see is what you get.