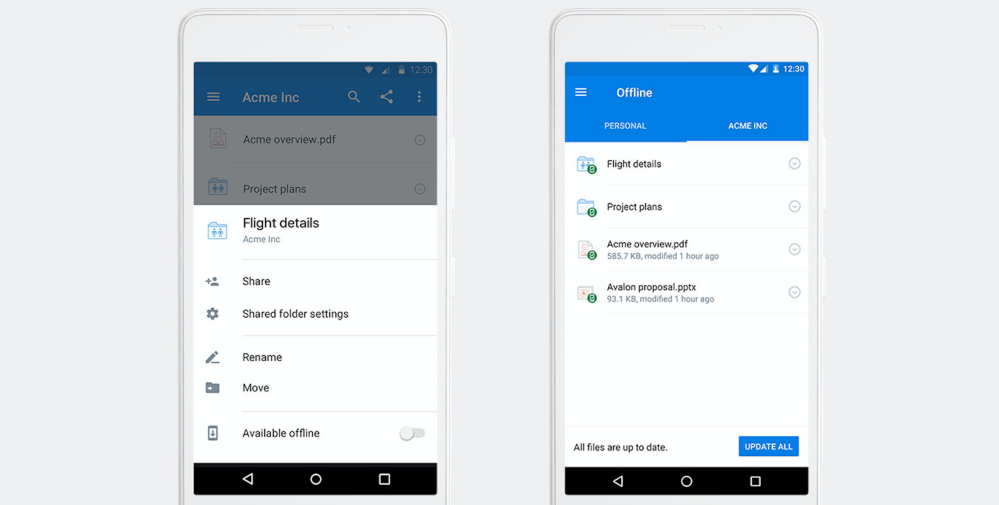 Dropbox today updated its Android app with a new feature that brings it closer in terms of features to other cloud storage apps on the market. The update adds support for offline folders, making it easier for users to prepare for being without a data connection…

As you’d expect, the option downloads the latest version of the file at the time of the download. If you go offline and someone else modifies the file in the cloud while you’re offline, you’ll have to reconnect to the internet in order to obtain the most recent version.

This feature has been a top request from users, so we’re excited to bring it to our Dropbox Pro, Business, and Enterprise customers. With mobile offline folders, you can tag an entire folder to have its contents automatically synced to your phone or tablet—no need to mark individual files for download. Just open Dropbox while you’re connected to the internet, and the app will take care of the rest. So whether you’re on the go or off the grid, you’ll always have access to your most important info.

The feature is one that really should have been there from the beginning and that’s supported by other competing mobile cloud apps such as Google Drive and Microsoft OneDrive.

The latest version of the Dropbox app is available on the Play Store now. The offline viewing functionality will be available to Dropbox Pro, Business, and Enterprise users over the coming days. The feature will come to iOS early next year.