PSA: Google says ‘production of the Pixel has not stopped’ despite erroneous Telus email

Following its launch, Google’s Pixel smartphones have proved pretty popular. Due to that, Google has had a lot of trouble keeping up with demand for the phone, with many customers complaining about that issue. Now, some are alarmingly reporting that Google has ceased production of the phone. Unsurprisingly, Google has confirmed that those rumors are false.

Earlier today several Reddit users reported that they had received emails from Canadian carrier Telus stating that Google would no longer be providing Pixel units to Telus because “Google will be ceasing production of their Google Pixel line.” These emails were triggered for users who had pre-ordered the phone, and the emails stated that Telus would no longer be fulfilling those orders.

The story was quickly picked up by at least one publication.

Speaking to Google, we were able to confirm that production on the Pixel isn’t stopping just four months after the phone’s release ─ as if that weren’t obvious enough. The full statement follows:

We’re really excited by the demand for the Pixel XL in Canada. Telus is currently out of stock of the Pixel XL. We’re working with our partners to restock inventory across our retail channels and we can confirm that production of the Pixel has not stopped.

So there you have it. Despite that email which understandably generated a lot of confusion, production of Google’s popular flagship won’t be stopping for the foreseeable future. And it is, of course, good to know that Google is still working to restock the device across retail channels. We just thought it might be a good idea to shoot down this rumor before it gained any more traction. 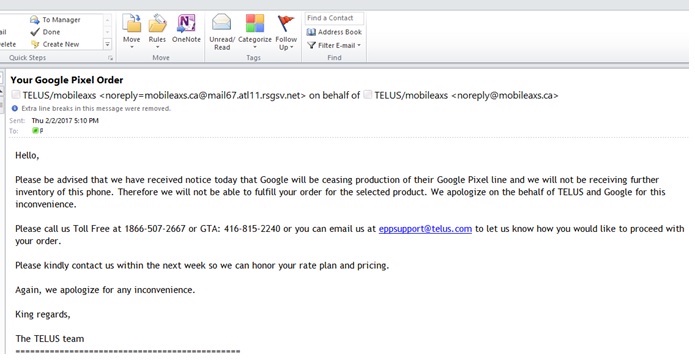