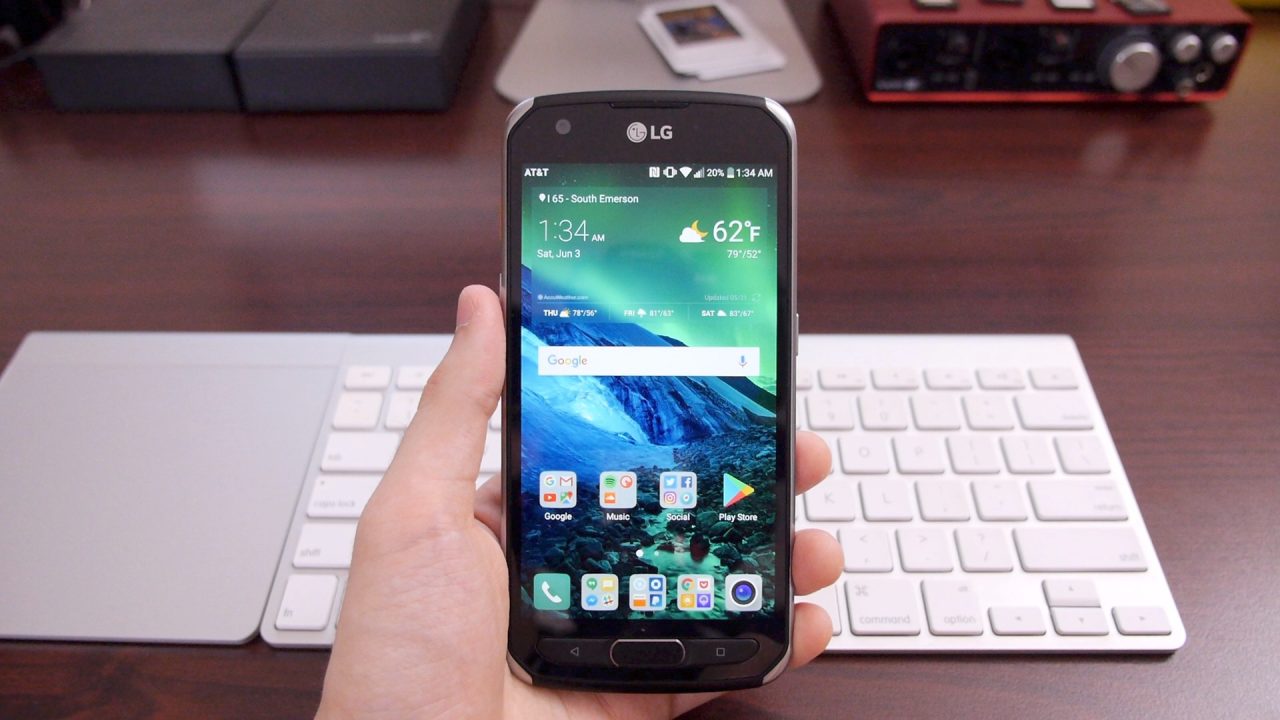 Shiny glass designs are great, but some people want something a little less fragile. The V10 was one of my favorite designs from LG because it ignored the trends of glass and aluminum and instead used a rubberized plastic back with stainless steel rails to achieve a rugged but still premium feel.

The X Venture is LG’s latest midrange offering coming to AT&T, reviving the V10’s sturdy design and adding even more durability with a focus on outdoor living.

The X Venture looks like a blend of the LG V10 and the Samsung Galaxy S4 Active; old phones, I know, but I mean it in a good way. The back carries over the V10’s rigid rubberized plastic that feels grippy and tactile, and the metal frame keeps the phone from feeling cheap by any measure. It’s refreshing to use a phone that isn’t constantly trying to slip out of my hands.

Should you happen to drop the X Venture, it’s built to withstand drops and just about anything else you could throw at it. It passes 14 MIL-STD 810G tests, meaning it should be fine in the face of pronounced heat or cold, altitude, shock, and more, and its IP68 rating should protect it from water and dust as well. Okay, it’s not quite indestructible … but it’s pretty close.

The X Venture is made to adapt well to any outdoor situation, including rain or snow. There’s a glove mode built in that ups the touch sensitivity, and every control is hardware-based, including the physical navigation buttons. The Back and Recent Apps buttons have a nice grippy texture, while the home button is smooth because of the built-in fingerprint sensor — which actually works very well.

The volume and power keys have been moved from LG’s usual rear placement to a more traditional side mounting, and there’s a red button above the volume keys called the QuickButton that acts as a programmable convenience key.

It’s frustrating to see microUSB here rather than USB-C, but at least there’s still a headphone jack. Speaking of audio, the speaker on the X Venture gets surprisingly loud, but it’s very mid-heavy, and its rear placement means you’ll end up muffling it by mistake a frustrating number of times; even a bottom-firing speaker would’ve been preferable.

The 1.4 GHz Snapdragon 435 chipset and 2 GB RAM powering the X Venture are nothing exciting, and like many midrange phones it lacks wireless charging and NFC. Upfront, the 5.2” 1080p display is pretty attractive with good viewing angles and a decent range of brightness, but there’s a blueish tint in the whites that my eyes never adjusted to. Typical of LG, it’s also an LCD panel, and while the color reproduction is pretty good for the most part (aside from being a little cool-toned), I really would’ve preferred AMOLED for the more saturated aesthetic and battery savings when displaying black. 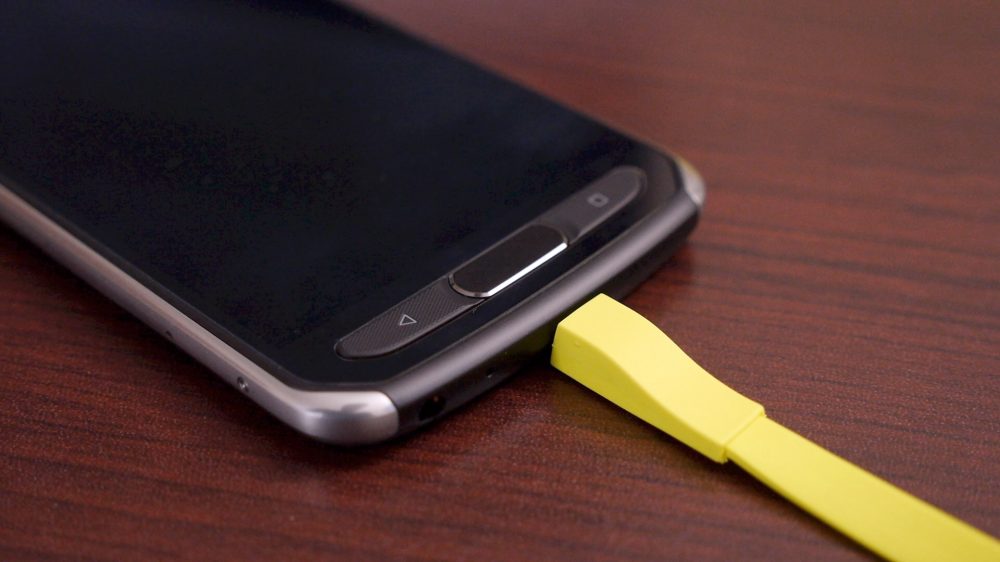 Even without AMOLED’s power sipping though, the X Venture manages outstanding battery life thanks to a 4100 mAh battery sealed inside. Thanks to having a smaller screen, lower (but still completely usable) resolution, and less power-hungry chipset than a flagship phone, I was able to squeeze out two full days of moderate usage from a full charge.

On a more demanding day of YouTube streaming, Bluetooth audio, gaming, and working in Google Docs and Slack, I still had over 20% left by midnight, and it’s quick to charge back up despite such a large capacity battery thanks to the phone’s support for Fast Charging.

Just like on the G6 and V20, LG’s software on the X Venture does a pretty good job of letting Android 7.0 Nougat shine on its own. Of course it’s not without its tweaks; there’s no app drawer by default, though you can always change that in the settings, and LG’s typical suite of apps like QuickMemo are still here.

Despite the light software, the X Venture just isn’t as snappy as I’d like. It’s quick and fluid for the most part, and even handles most games well, but the problem lies in how slow it is to open apps. I found myself staring at a loading screen far too often when opening an idle app or even just launching the Recent Apps window — a direct result of the paltry 2 GB RAM. 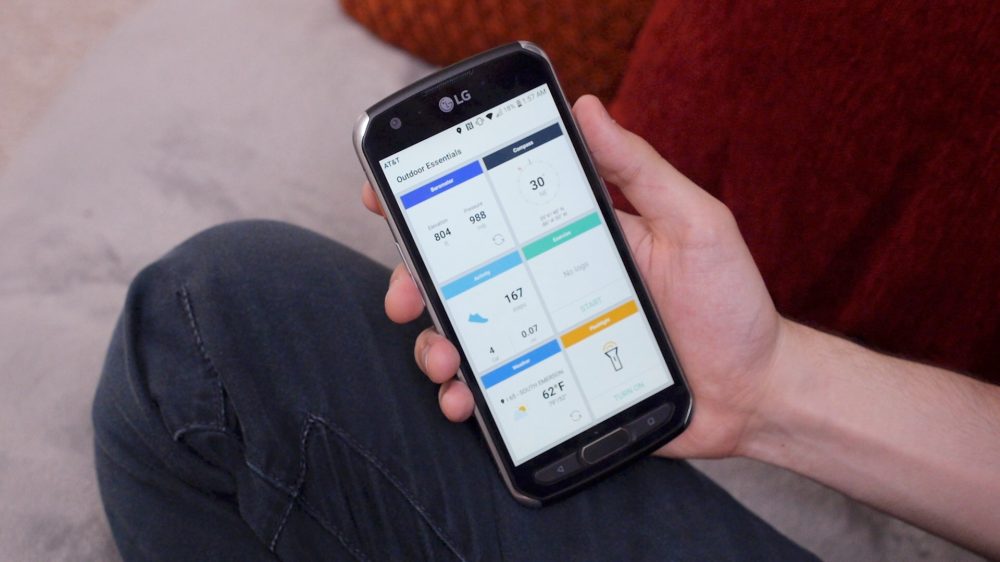 There’s the same excessive bloatware you’ll find on pretty much any AT&T-branded Android phone, and disappointingly few can be uninstalled, but at the very least you can hide them without needing to install a custom launcher. You’ll probably also run into LG’s new Outdoor Essentials app, which holds a number of tools for exploring and exercising, including a compass, barometer, pedometer, and more.

I like the number of shortcuts LG hides away in the X Venture, too. You can launch the camera without waking the phone by double pressing the volume key, and jot down a quick note with a double press on volume up. Since those shortcuts don’t translate well while the phone is unlocked though, the QuickButton comes into play and sets itself aside as a feature I’d love to see on every LG phone moving forward.

That little red button above the volume keys can be programmed in the settings to hold up to three different shortcuts, depending on if you press, double press, or press and hold. It’s not entirely limitless — I was disappointed to see there’s no way to call down the notification shade with it, but you can still set any app and a few functions like toggling the flashlight.

The only annoyance I ran into with the QuickButton is how easy it is to press by mistake when trying to adjust volume. I grew so frustrated of accidentally opening Spotify (my single press shortcut) that I eventually just disabled the single press shortcut altogether. Still, I love having quick access to the camera with a long press and the flashlight with a double press.

More often than not, I was pleasantly surprised with the cameras on the X Venture. The primary sensor is 16 MP and, especially in daylight, takes some really nice-looking shots. They’re strongly oversharpened, but colors look great thanks to the fantastic auto white balance, and you can even get some pretty good depth out of the camera (though don’t expect the pronounced bokeh bubbles that a camera with a wider aperture would be capable of).

Even in low light, the camera still performs decently, though no OIS means you’ll need a steady hand or tripod if you want to avoid motion blur. It would’ve been awesome to see a second lens like the LG G6 for wide angle shots, but that likely would’ve driven up the cost considerably.

The 5 MP front camera isn’t bad either, though it’s a lot softer than the primary shooter. It features a software-based wide angle mode that works well for group selfies, though one to thing to keep in mind — third party apps like Snapchat and Instagram can only use the wide angle mode, which can take some getting used to.

Overall, the X Venture is a great deal for AT&T customers. It offers better battery life than just about anything else on AT&T’s roster, and at $330 it’s less than half as much as most flagships. NFC would’ve been great to see for Android Pay, and some will mourn the absence of wireless charging as well, but that’s par for the course with midrange phones, and aside from longer load times than I’m used to, I really didn’t miss my Galaxy S8 during my time with the X Venture. 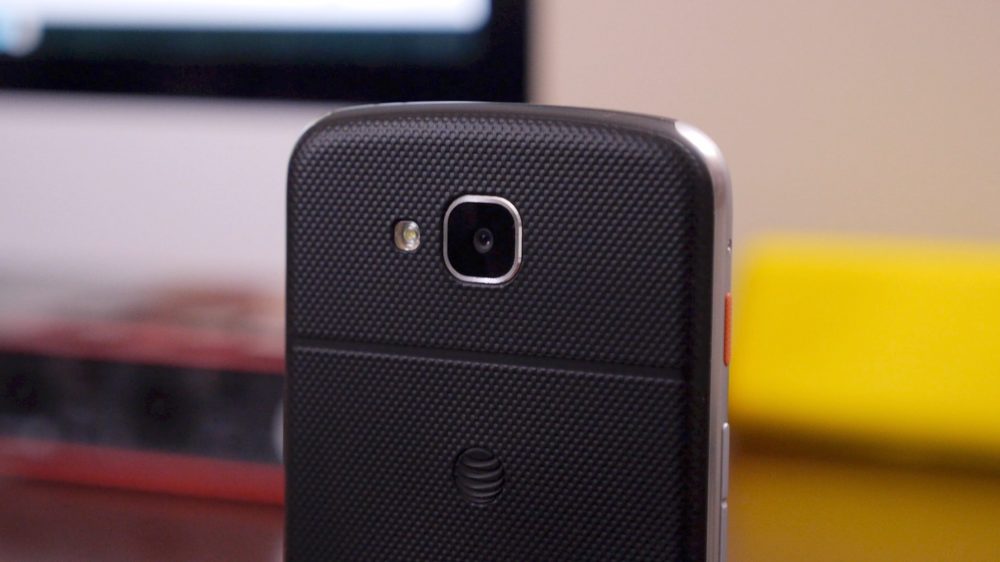 One important thing to keep in mind is that there’s a ton of competition in the X Venture’s price range. For around the same cost, the Moto G5 Plus and OnePlus 3 are faster phones with an even lighter software experience, though the X Venture still wins out in a vitally important measure; where the other phones have to be purchased outright, you can finance the X Venture for $11 a month through AT&T. That does mean you’ll be locked into their service for 30 months, but with zero APR it’s a very solid option for AT&T customers looking for something a little more durable than the glass-back phones flooding today’s market.