Torrent sites around the world are being threatened, especially over the past year, with being shut down or hidden from the public eye. With that ongoing, many pirates have been on the hunt for an alternative way to distribute content, and Google Drive has quietly become a hotspot for this activity…

According to Gadgets360, Google currently has over 4,700 requests for Drive content to sift through from the past month alone. The links that content owners are requesting to have taken down are in some cases full movies, but generally, Google’s defenses recognize and automatically take down those files. To get around that, these pirates are also taking advantage of YouTube.

How? Pirates are apparently uploading content to YouTube and marking it as unlisted, and then linking to those videos via Google Drive. This makes it difficult (or impossible, for now) for Google to automatically process the infringing content, and it makes it even harder for copyright holders to find it.

This isn’t an issue solely facing Google either. Competing cloud storage options such as OneDrive and Mega both see the same problem, but Google Drive seems to be used more frequently by pirates. Google saw over 4,700 requests last month while OneDrive and Dropbox only saw a dozen or so, and Mega was only around 100.

The reasons why Google Drive is seeing such wide use could be attributed to a number of factors. For one, Drive is one of the easiest cloud storage accounts to sign up for and use, and sharing is also a breeze with Google’s system. Further, Google Drive offers up more free storage compared to most competitors at 15GB. Unlisted YouTube videos have similar benefits with an easy interface and unlimited storage, not to mention reliable streaming.

But Drive and YouTube aren’t the only services from the Mountain View company being abused. Gadgets360 notes that Google’s My Maps feature is being abused to host these links. Since the content users posted to My Maps isn’t moderated, pirates are free to conceal this information wherever on the globe they chose and share it wherever they would like. 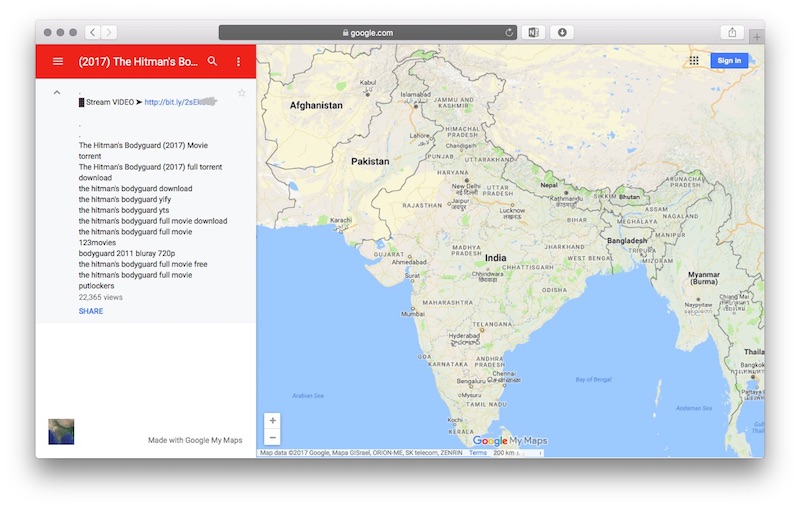 Google has responded to these issues, stating that they take copyright infringement seriously, but neglected to mention how it aims to improve in these instances.

It’s against our policies to post copyright infringing links or content. Rightsholders can and do notify us when copyrighted material has been posted and we work quickly to review and take action on those notices.