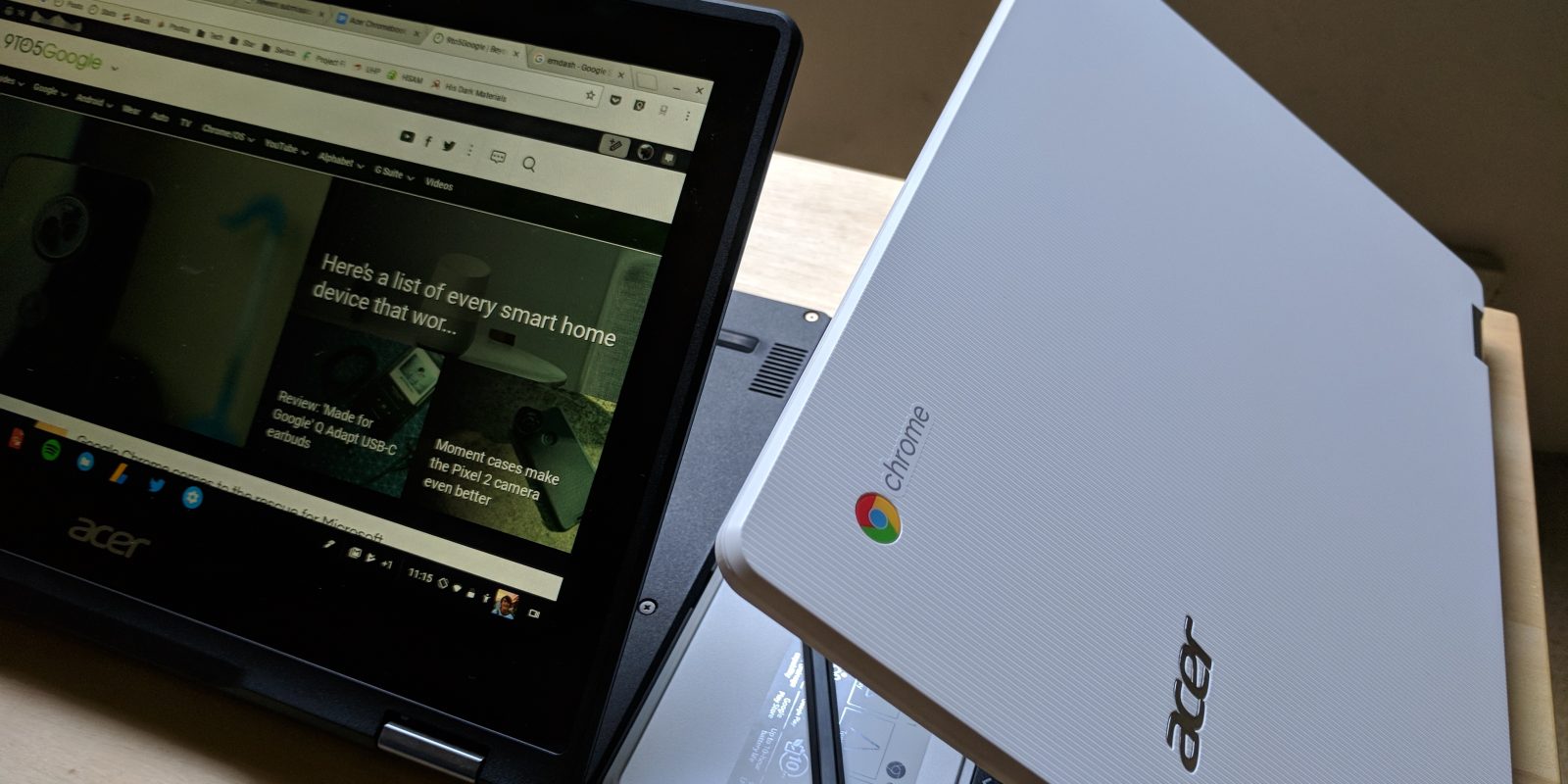 With touchscreens becoming a standard feature in recently released Chromebooks, Google’s move to update Chrome OS with more touch-friendly optimizations — often borrowed from Android — is not all too surprising.

However, what’s surprising is how natural this updated Chrome OS feels, excelling on tablet form factors and convertible laptops, like the Acer Chromebook Spin 11. At this rate, buyers are not just getting a fast and secure laptop, but also a great tablet-esque experience with their Chromebook.

Acer’s convertible Chromebooks have not drastically changed their design, but rather continued on a path of refinement that provides gradual, but noticeable improvements. On their first convertible, the R 11, Acer used four rubber nubbins at each corner to raise the laptop so that the keyboard would not rest on the ground when flipped for “Display mode.”

With the Spin 11, Acer went for a lip that serves as a border around the keyboard and palm rests. This is aesthetically more pleasing and solid given how my R 11 lost a nubbin after two years, resulting in a partial wobble. However, with the Spin 11, I did find myself frequently snagging my hand on the lip near the palm rest. It’s the one minor inconvenience that I so far have not been able to adjust to.

Meanwhile, I appreciate Acer moving the status light from front-right corner to the side next to the charging port and power button so that the annoying flashing light isn’t always visible.

Another design choice that Acer brought over to the Spin 11 is the black frame around the display. On the white unit, it makes for a “panda” look, which I have to admit is rather nice when coupled with the similarly dark keys. However, I’d personally opt for the completely black unit that will be slightly harder to find than the white unit in most retail channels.

A branding choice that baffles me is the “Antimicrobial Corning® Gorilla® Glass” wordmark printed underneath the glass in the top-left corner. If you haven’t assumed already, this glass is antimicrobial, in addition to being tough, it resists odor and stain growth. Given the touch-heavy use this is a fine feature, but one that I wish was minimally advertised. The screen at moderate brightness does not particularly highlight the logo, but in any location with moderate light you will see it glint out of the corner of your eye.

The Spin 11 is a rugged device that adheres to the U.S. MIL-STD 810G military standard for falls up to four feet and up to 132 pounds of pressure that could be associated with someone standing on the laptop.

However, the more useful environmental proofing is a drainage system (check out the drainage holes on the underside) that allows up to 11 ounces of water to be spilled over the keyboard and keeps liquid away from critical components.

In my weeks with this device, I have not needed to take advantage of these measures. However, it does result in peace of mind that I wish more expensive laptops — looking at you MacBook — would take similar measures to defend expensive purchases against common accidents.

Another thing Apple’s thin and light machines should copy are the dual USB-C and USB-A ports on both sides of the laptop. Either USB-C slot can be used to charge the Chromebook, while an SD card slot is a nice convenience.

While the display only has a 1366 x 768 resolution at 11.6-inches, the IPS panel allows for wide viewing angles that counter the not too high pixels per inch (PPI) count. It is bright, vivid, and an improvement over the Chromebooks of yesteryear.

Acer often touts its patented 360 degree dual-torque hinge on its convertibles that allows four viewing modes. I can vouch for this durability as it has remained stiff for the past two years on my Chromebook.

Display mode — where the keyboard is facing downward and the display is facing the user — is increasingly my favorite way to use a touch-optimized Chrome OS. Putting my legs up, the Chromebook in this mode rests on my thighs while I leisurely browse a particular long article or read a book.

I’ve also found myself using the Chromebook in portrait tablet mode. The 16:9 ratio display looks a bit narrow when viewed this way and unfortunately the low-res is in full display, with zooming required on more image-heavy sites. However, it is fine when reading text and makes for an enjoyable experience, especially in the Kindle app. In fact, I wish I could have access to the backside trackpad for swiping pages.

Included with the Spin 11 is a Wacom stylus that works fine for sketching, especially in the excellent Google Keep. I haven’t found myself taking handwritten notes, but that doesn’t mean I haven’t integrated the stylus into my workflow.

On Chromebooks with stylus support, there is a “Stylus tools” panel on the dock. Here users have access to a magnifying glass that puts up a loop on your screen, as well as a laser pointer. However, my favorite stylus feature is the ability to take screenshots. There is a general button for grabbing the entire screen, but also one for just snapping a particular region. In my line of work, this is remarkably useful. The last shortcut for opening a Google Keep document is also pretty convenient.

In general, this pen experience is hindered by not having somewhere to store the stylus on-device. This is also my complaint with the Google Pixelbook: if you’re bundling a stylus, be sure to have a convenient way for customers to bring it around with them.

I’d be remiss if I didn’t start every Chrome OS software overview with how seamless the sign-in experience is. It’s simply delightful how within a few minutes you can be up and running with your apps and more importantly your various preferences and customization tweaks. It’s a differentiator and really does make computing as simple as the web.

Chromebooks are simple, their traditional laptop interface has always focused on the basics. When the first touchscreens proliferated, I found that Chrome OS never really did anything to optimize for the hardware. For example, settings featured ridiculously tiny touch targets and switches.

However, that has recently changed, especially with Chrome OS 61. The first marquee sign of a more touch-focused UI is the Pixel-like app launcher. When launched it opens a large search bar and apps you are likely to use. Also responding to swipe gestures in tablet mode, it is just elegant, fast, and a nice optimization. There’s also an ample amount of blur, which is also found on the redesigned lock screen, that makes the simple, utilitarian OS begin to really look good and come into its own design-wise.

While most people will not spend too much time in settings, this too has been optimized following the Material redesign. Preference sections are better grouped with the Material navigation drawer allowing users to quickly jump rather than have to scroll down to the area they’re looking for.

The Spin 11 features Android apps enabled out of the box. I love the Play Store alone for finally providing a Twitter client on Chrome OS.

However, Android apps really do need more optimization. I’m not referring to the experience inside apps — Material’s animations and touches still flourish, but rather how Chrome OS treats the windows of these applications. 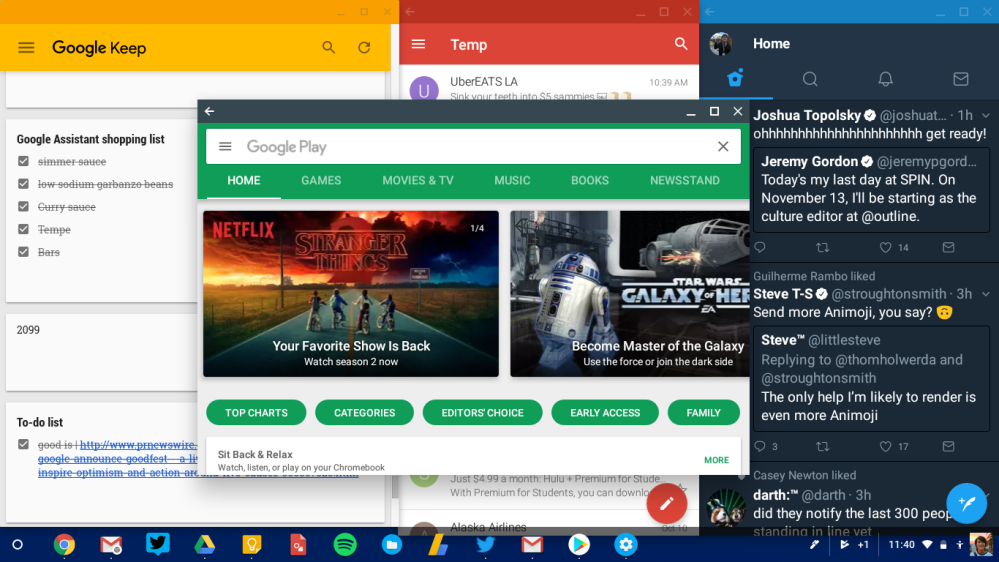 When using Chrome OS in tablet mode, all windows are automatically fullscreened. While getting rid of window management is likely the easiest option for the majority of users, it is not a particularly good move for power users as it greatly limits productivity on Chrome OS.

My dream is to have multiple phone-sized apps open and just walk around with a Chromebook from place to place with a dashboard kind of overview. Fortunately, Google is experimenting on this, and hopefully it will come to the stable channel sooner than later.

A dual-core Intel Celeron N3350 chip that runs at 1.1GHz, with up to 2.4GHz burst, powers this Chromebook. However, the most important spec with Chrome is of course the amount of RAM. 4GB, like on this unit, is an absolute baseline now, though always opt for more if you can.

My standard configuration of a dozen tabs and two or so Android apps running in the background never really caused this machine to slow down. Chromebooks simply just age well with the baseline of specs that power them.

With my heavy writing and browsing workload, an eight-hour day is easily met, though Android app usage is more minimal. I do not foresee needing to bring around a charger, with a top-up in the morning adequate for a day’s work. 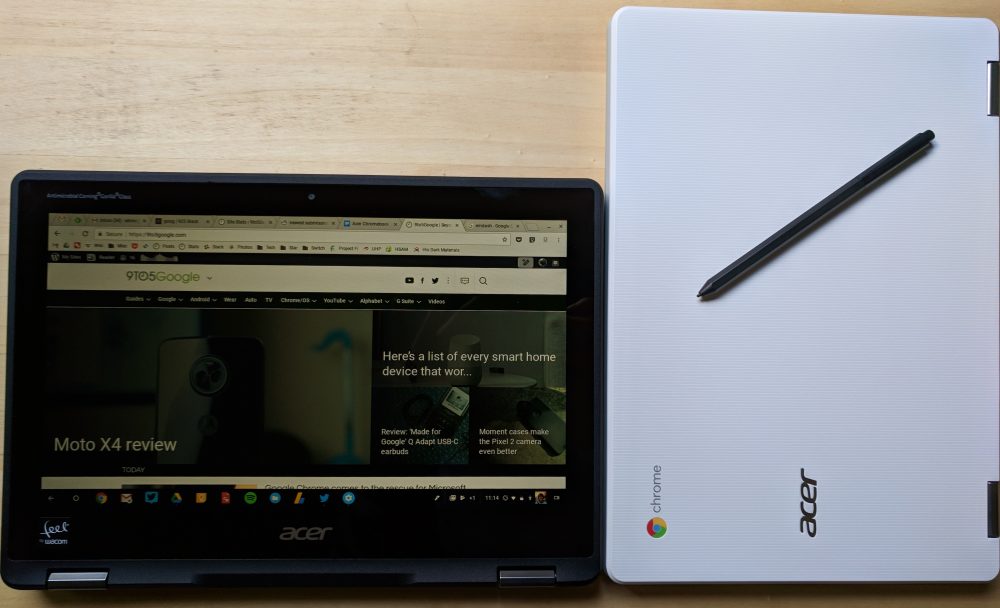 The Acer Chromebook Spin 11 just inspires rugged confidence with its hardware. It feels and is technically solid, with a good display that the majority of people will appreciate. Chrome OS is getting better every month, with optimizing touch being a particular focus of Google going forward.

People already know Android apps and they will greatly appreciate that cross-platform familiarity when using Chrome OS. Meanwhile, more superfluous additions like the stylus are more than supported in the OS, with some subset of the wider population finding particular benefit from it.

Chromebooks have long reached the good enough point specs-wise. My two-year old Chromebook is running speedily. What newer Chromebooks are doing to encourage people to upgrade, beyond being already cheap, is adding “extra” features. In my mind, spill and drop-proofing are not an enthusiast spec, but rather one that many people will take advantage of in the long run.

If you still have a fairly recent Chromebook, it may not yet be time for you to upgrade. Going forward, or if you’re a new buyer that wants Android apps now, you should look for these useful extras, and you would do well with the Acer Chromebook Spin 11.

The Acer Chromebook Spin 11 is available from a variety of retailers, including Amazon, Acer’s online store, and other online retailers.