Google’s ongoing project with Street View is ambitious, but it’s also not the only one going on at any given time. Microsoft has had its own “Streetside” photography project ongoing for Bing maps and, after a while, cars from those opposing projects crossed paths.

Taken back in 2014 and brought back to the public eye on Tumblr (via The Verge), there’s an intersection in Minnesota where these cars crossed paths and had that encounter immortalized on each other’s photos. It’s certainly ironic that this happened at all, but what’s even more interesting is what Microsoft decided to do about it.

If you look on Google Maps Street View photos of the occasion, you’ll see the Bing car in full view, all the way as the Maps car drives down that street. However, when you check out Bing’s photos (seen above), the Google Maps car is actually “erased” with a giant rectangle. Obviously, you can still tell that the Maps car is there given the equipment up top, but the majority of the car is blocked out. In one shot, though, the entirety of the car is visible in the distance.

Even more interesting is that on Tumblr, one user was able to find a shot where the Maps driver was still visible, shown waving at his counterpart from Microsoft. 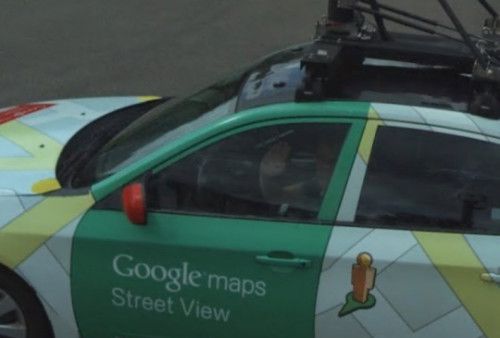