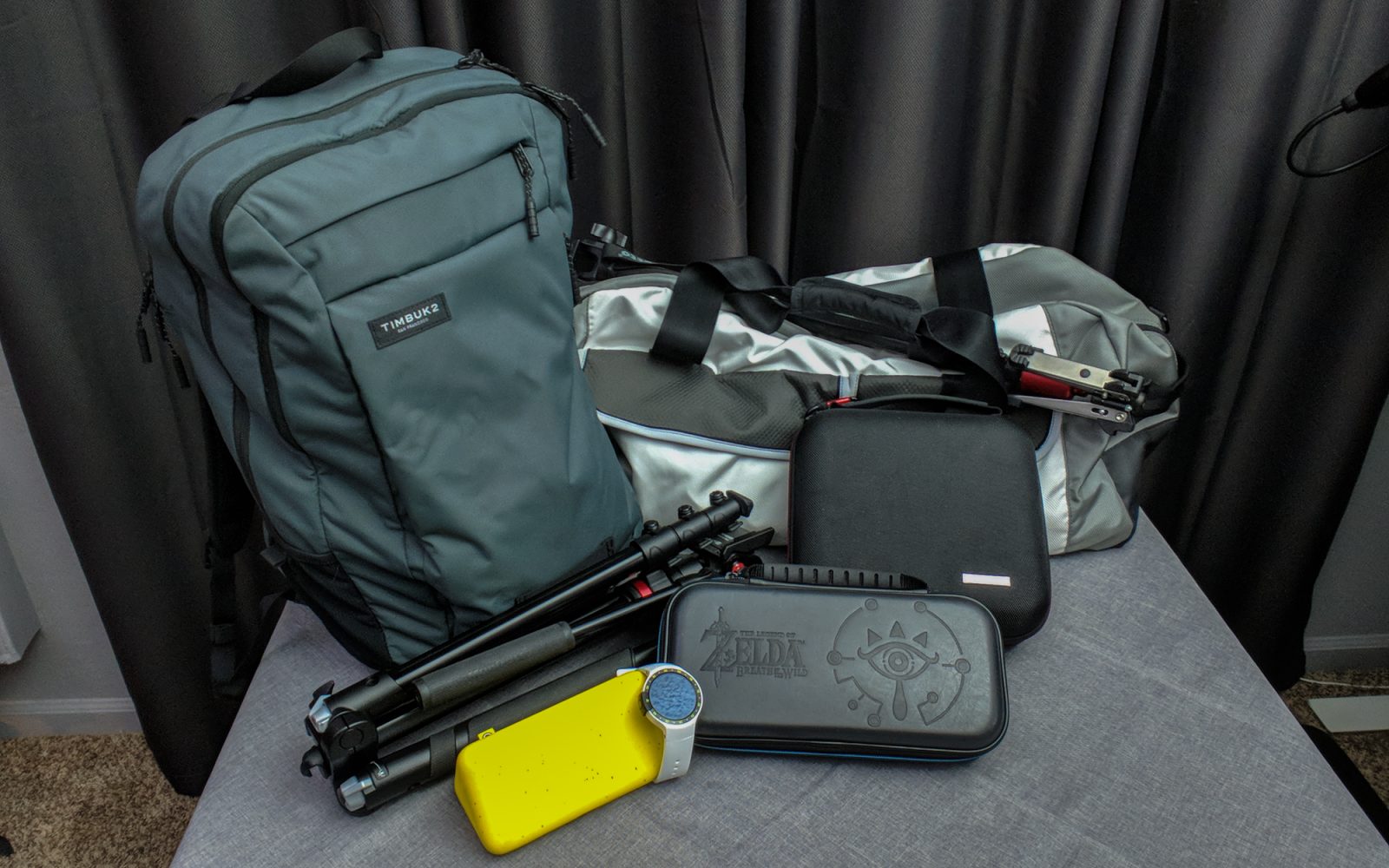 If you can believe it, CES 2018 starts next week which means a bunch of us are making our way to Las Vegas, Nevada. As 9to5Google’s only Nevadan writer, I will be driving to the show which means I have extra cargo room to bring everything that I may need to capture this year’s announcements and more. Here’s what I am bringing with me to CES 2018…

I’m someone who can never find the perfect backpack. I want something with lots of pockets, space to hold my laptop, but also a semi-budget friendly price tag. Over the years, I have found bags that match these criteria, but I was never pleased with them.

On top of all of that, for CES, I wanted a bag that wasn’t necessarily a camera backpack but would be able to carry my tripod. Enter the Timbuk2 Command. This backpack is everything I have ever wanted and more. It’s a slim looking bag that can expand to carry all of my camera equipment, it has enough pockets to carry all of my cables and dongles, and best yet, I can use the bottom tightening straps to hold my tripod (see my tweet).

Typically, the Timbuk2 Command retails for around $130 on Amazon, but I was able to snag it for about $90 around Christmas. If you’re in the market for a premium looking and feeling backpack that can carry more than its fair share, check out the collection of Timbuk2 bags. Thankfully, they go on sale fairly often. 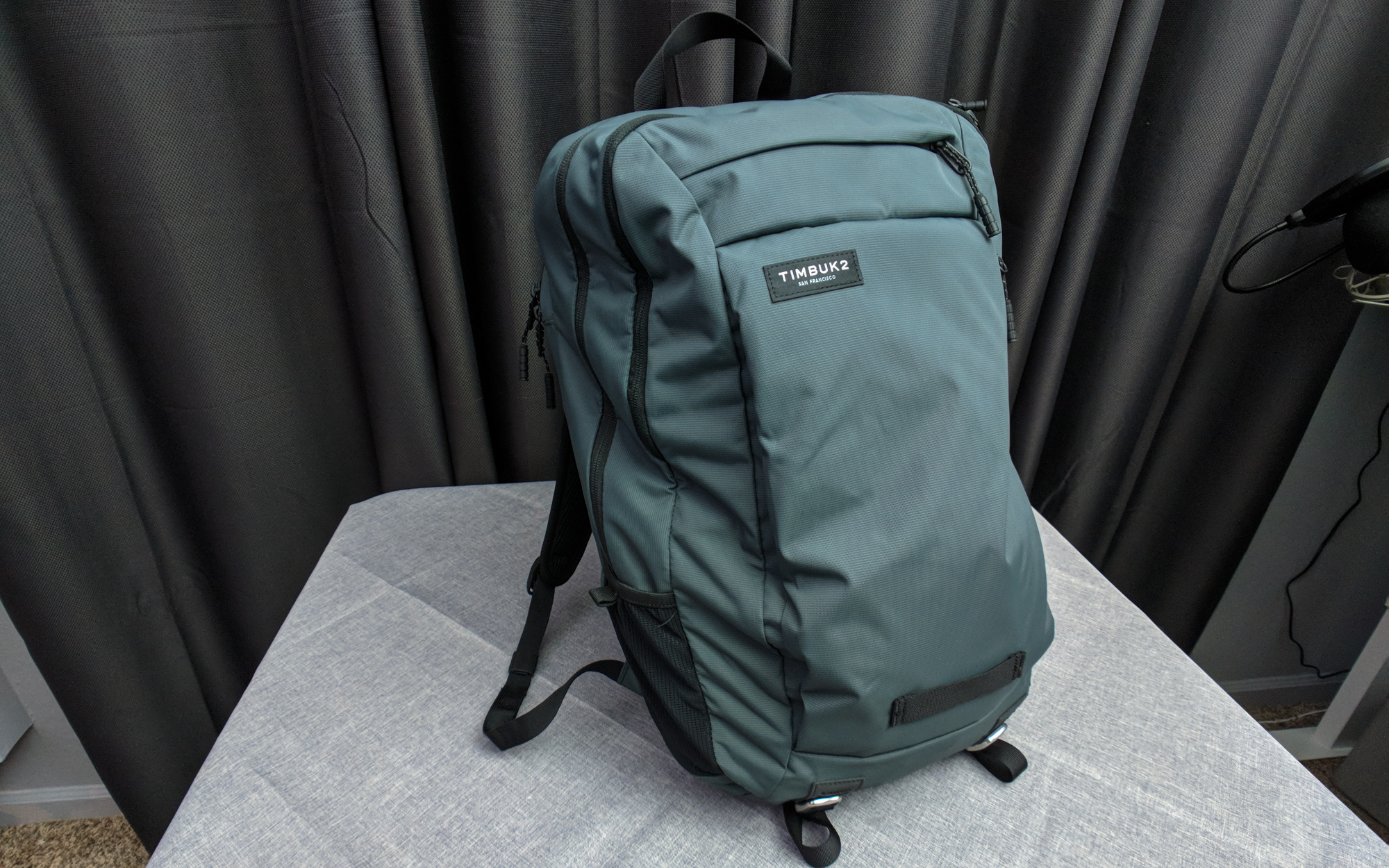 Some of the most essential equipment we as press bring to CES is our camera and other tools for capturing photos and videos of everything announced at the show. While others may use mirrorless cameras from Sony and other companies, I still prefer to use a DSLR. My personal choice is the Nikon D5500. It may not capture 4K video, but the stills and 1080p videos always come out looking excellent.

To help capture video, I am bringing two lenses with me: a 35mm prime lens with a f/1.8 aperture for capturing footage in low-light and a 55-200mm lens for taking photos from far away.  As far as memory cards go, I primarily use a 128GB SanDisk Ultra microSD card. Just in case that fills up, I will also have a 32GB and a 64GB SanDisk Ultra microSD card. While I probably won’t need them, having extra memory cards is useful when someone else is editing and uploading photos during an event.

Other little accessories that I have with me are a Rode Video Mic Go that records audio directly into the camera, a Shure PG58-XLR Microphone for recording interviews, Peak Design’s Slide Camera Strap and Cuff which I change out based on how I wish to hold my camera, a Zoom H4N for recording higher-quality audio clips, and the Aputure H198 Amaran CRI 95+ on-camera light which helps in low-light situations.

Lastly, I will have the Manfrotto BeFree tripod with fluid video head and the Manfrotto 560B-1 Monopod with me. Yes, these are a bit pricey, but they’re incredibly premium, compact, and help create extremely smooth video pans. 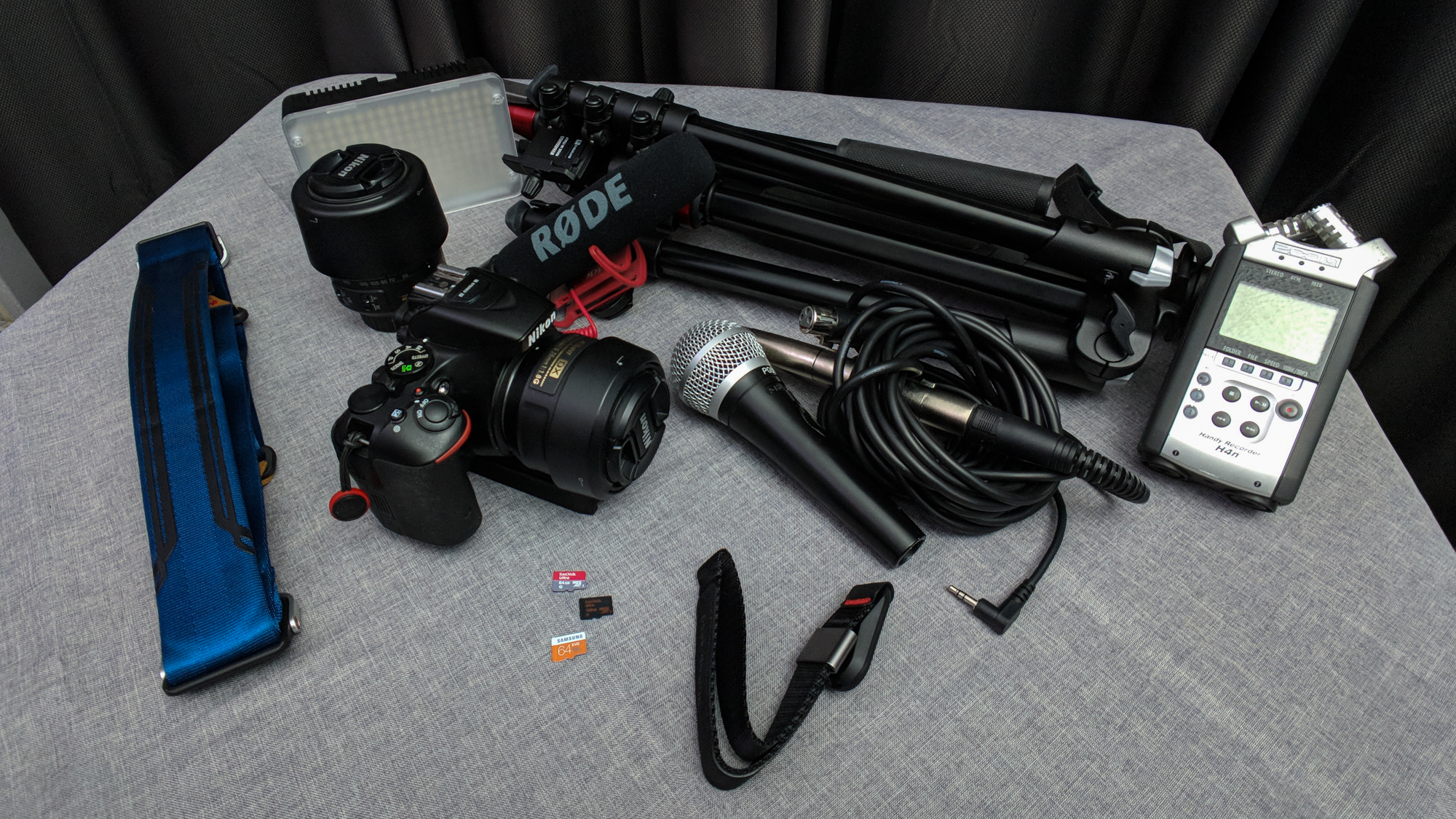 We could capture all of the pictures and videos in the world, but they wouldn’t matter if we didn’t have a way to share them with all of you. To help me with this, I am bringing two laptops with me: a 2014 15-inch MacBook Pro Retina and a 128GB Google Pixelbook.

So why two laptops? Simple. My MacBook has a dedicated GPU which is great for editing photos and videos. Unfortunately, due to its age and long-term usage, its battery can only last a few hours if I’m lucky.

The Pixelbook, as it’s running Chrome OS, can last me all day with heavy usage when writing about newly announced products. While it may seem like overkill, I don’t mind the juggle between laptops to get me through the long CES days. 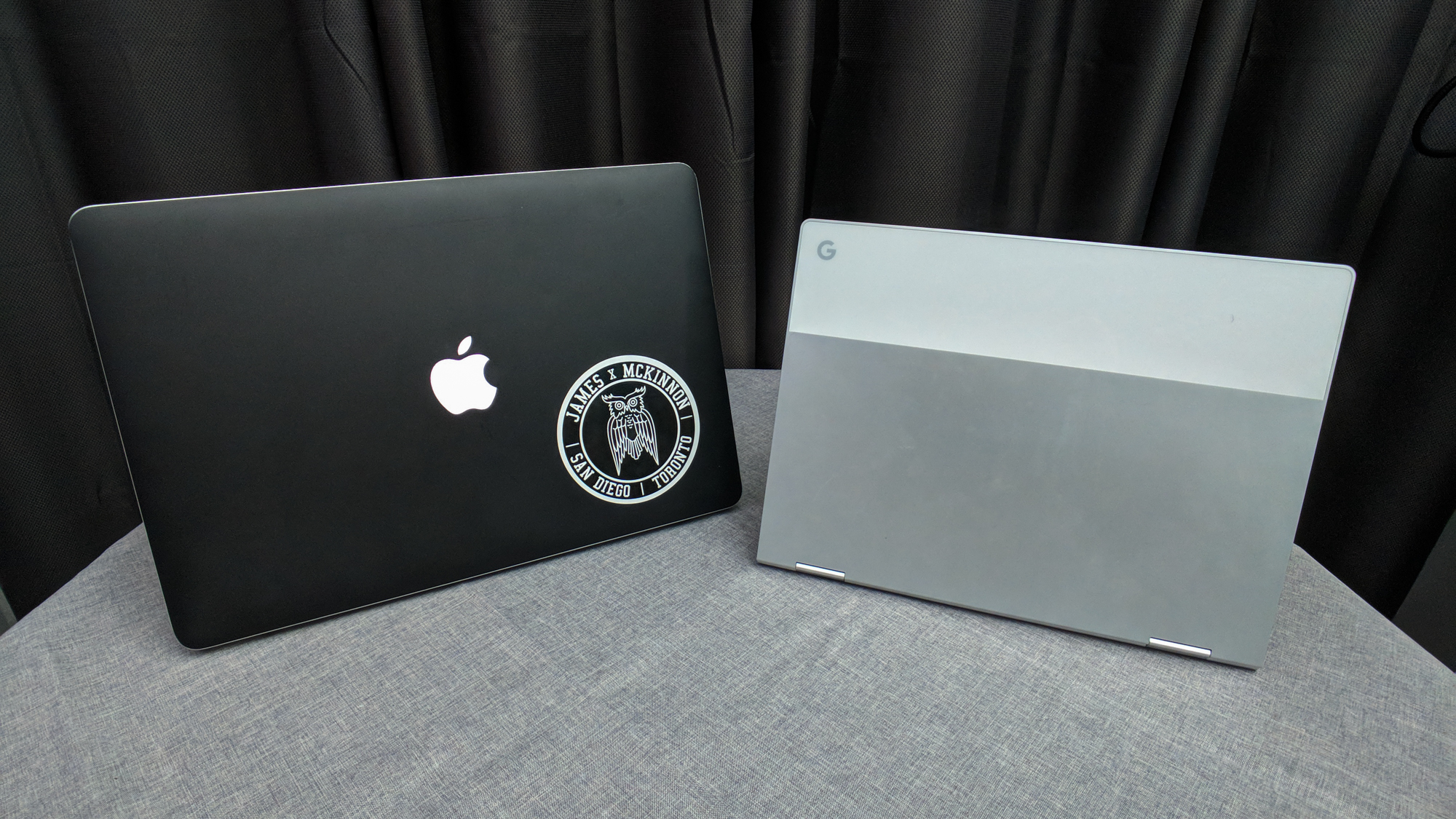 On top of everything else that I am bringing to the show floor, I have a bunch of little accessories – the most important of which is my Anker PowerCore+ 20100 USB-C battery bank. Running around and continuously using my Pixel 2 XL all day tends to drain the battery rather quickly. With my PowerCore+, I have enough juice to fully charge my phone multiple times as well as keep my Pixelbook powered on if it’s low.

To avoid carrying around a bunch of cables, I use the Chafon Multi USB Cable which has microUSB, USB-C, Lightning, and more.

If I need to listen to a livestream, edit a video, or just want to stream music, I have my Bose QC35 II’s and my Apple AirPods. And to keep up with notifications, I will be wearing the TicWatch S.

As I will be using my Pixelbook primarily while on the floor, I needed a USB-C dongle that allowed me to plug in SD cards and USB-A flash drives. Thankfully, I found the Satechi 3-in-1 dock that covers all of the bases and works marvelously with the Pixelbook.

While at CES, I also plan to do a bit of vlogging on my personal Instagram and Twitter accounts. For this, I will be using my Pixel 2 XL with Moment lenses attached, a Samsung Gear 360 camera, and a Joby GripTight ONE GP Stand. Make sure to follow me if you want to see behind the scenes of CES 2018. 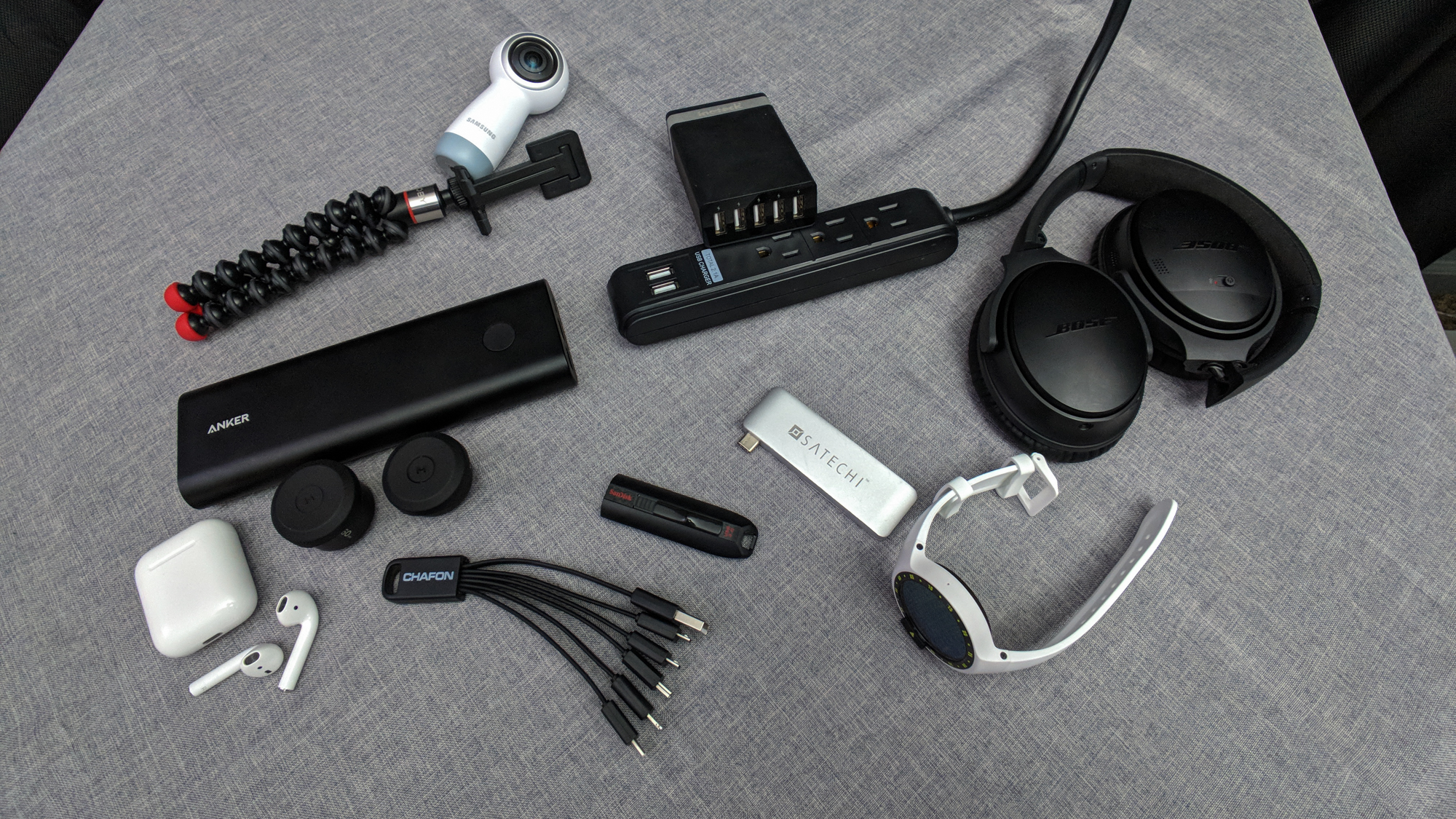 Lastly, I have brought along a couple of extra items which won’t be coming with me to the CES show floor but are vital for my trip. First, there is my duffle bag from Timbuk2. While it doesn’t look like the company the company still makes this specific model, there are a bunch of different variants available online. Just like with my backpack listed at the top, it’s a bit pricey, but it’s one of the best-built bags I have ever used and has survived three CES trips.

Next is a weird item: a carrying case for Moto Mods. While I might not use it for its intended usage, it does make it easy to securely bring up to six smartphones with me to CES. Why do I need to bring all of these handsets with me? I probably don’t, but I’m a geek so who cares.

And thirdly, I have my Nintendo Switch. While we don’t have a lot of free time while in Vegas, several of us are bringing our handheld consoles so we can play against each other when we get the chance.