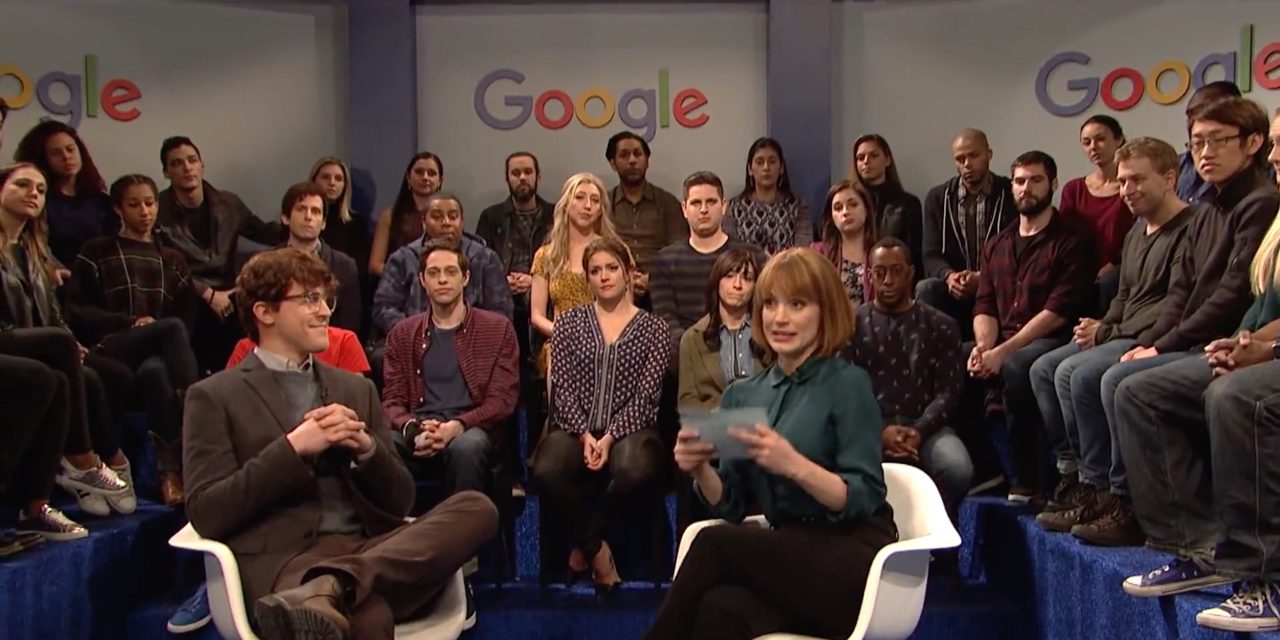 Halfway through its 43rd season, comedy show Saturday Night Live last night had an interesting sketch that attempted to skewer Google, among other tech industry trends.

Titled “Google Talk,” the skit is likely a play on Talks at Google — the company’s long-running program that “brings authors, innovators, scientists, actors, actresses, artists, filmmakers, musicians, and speakers of all kinds to Google for talks centering on their work.”

SNL host Jessica Chastain moderated the “Google Talk” as presumably a Googler with a stereotypical California accent. After a cringe-worthy intro, whose opening graphic featured an animation rather reminiscent of Google I/O, she introduced her guest — a sociology professor from UC Berkeley.

The conversation’s topic was bullying and the audience was made up of students. In reality, the audience of these talks at the company’s various offices around the world are just employees.

Other supposed Google aspects of this talk was an employee keeping track of the online social reaction from the “tweetdeck.” There was also a skewer about the trend of standing desks or “chair-less work areas” at tech companies, which actually made for the funniest part of the skit.

Meanwhile, there was also an erroneous reference to the previous Google Talk product and its voice chat capability. (A skit about Google’s disparate messaging services would likely have been hilarious and probably play well given most people’s fondness for Talk.)

All around the sketch, which heavily involved The Simpsons, was odd, cringe-worthy, and only vaguely laugh-inducing. However, SNL last night did air a funny tech-related sketch that skewered Amazon and its process of selecting a new headquarters, as well as Jeff Bezos; proving just another area Alexa is ahead in.