In the aftermath of yesterday’s tragic events at YouTube headquarters, the video network has provided more details about what unfolded. The Google company also commended the heroics of first responders and employees, as well as detailing some efforts to prevent future incidents.

On Tuesday afternoon, identified suspect Nasim Najafi Aghdam entered the YouTube campus at 901 Cherry Avenue through a parking garage and made her way to the outside courtyard where Googlers were having lunch. Two gunshot victims have since been released from the hospital, while a third remains in critical condition.

In today’s statement, YouTube cites in place “security protections” as preventing Aghdam from entering the building. San Bruno Police arrived on the scene at 12:48PM, within two minutes of the first 911 calls. YouTube commends the police response as “exceptional” and for entering the building to protect employees.

The Google division also praises its own employees for going back into the office to give authorities badged access, providing directions, and tending to the wounded. YouTube notes that its employees provided “details about the shooter that proved critical.”

Moving forward, YouTube notes that it will be increasing security at offices worldwide. Meanwhile, Googlers are being encouraged to take time off work or work from home, with the company providing wellness services.

“We are also revising this incident in detail and will be increasing the security we have at all of our offices worldwide to make them more secure not only in the near term, but long-term.”

YouTube ends today’s note thanking the police fire department, and medical response teams. It also acknowledges the outpouring of support from its global community, and the likes of Tim Cook, Jeff Bezos, and others in the industry. 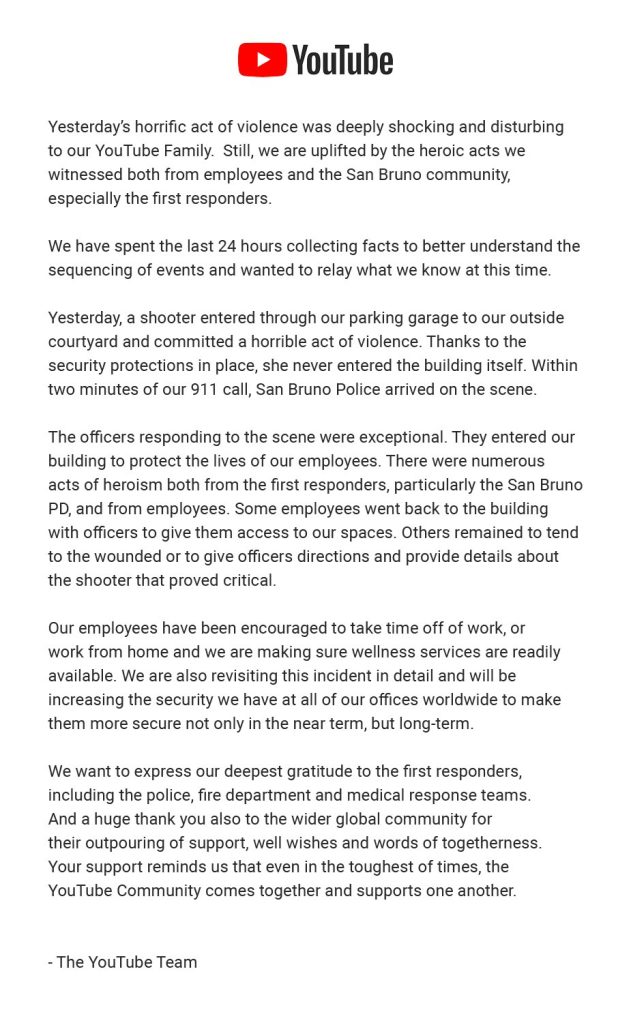