A few weeks ago, we learned that Google was working on a Chrome OS release notes web app, which would be tailored to your specific Chromebook. Google has now launched this simple web app (installable on Chrome OS) under the name “What’s New.”

The folks at Chrome Story have found, in the latest version of Chrome OS Canary, that Google has included a new notification, to be shown after receiving an update. Clicking the notification brings you to a newly launched web app, called “What’s New.”

Despite being discovered first on Chrome OS Canary, which is currently version 78, the page lays out details for new features coming with Chrome OS 77, including widespread Google Assistant support, and Virtual Desks.

This alone would hint at “What’s New” launching with Chrome OS 77, but we’ve also found further confirmation. The flag that controls whether or not to show the “What’s New” notification is set to enabled by default in branch number 3865, on which Chrome OS 77 is currently based.

Under the hood, Chrome OS gives the app information about your Chromebook, such as what model you’re using, which update channel you’re on (Stable, Beta, Dev, or Canary), and which update you just installed. In the future, this will be used to tailor the “What’s New” page to your specific Chromebook. For example, Chromebooks that do not support Linux apps shouldn’t see new Linux apps features.

“What’s New” is also a progressive web app, meaning it can be installed to the app shelf for easy access. Doing so reveals a star-shaped icon in Google’s usual four-color scheme. 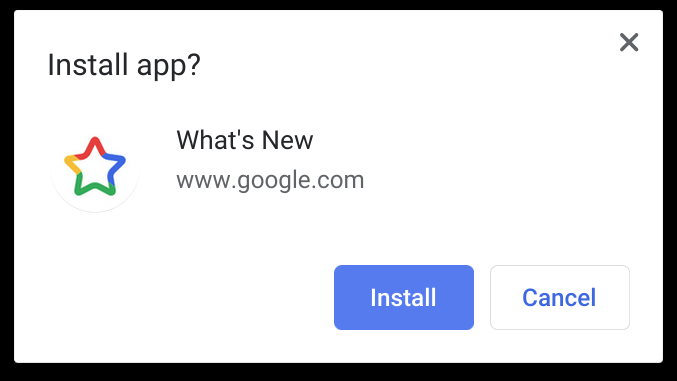 While “What’s New” offers drastically more insight on what actually changes between Chrome OS updates than what Google had offered previously, it seems to only cover the major points for now. To keep up to date with everything new in each Chrome OS release, stay tuned for more in-depth release notes, courtesy of our Abner Li.