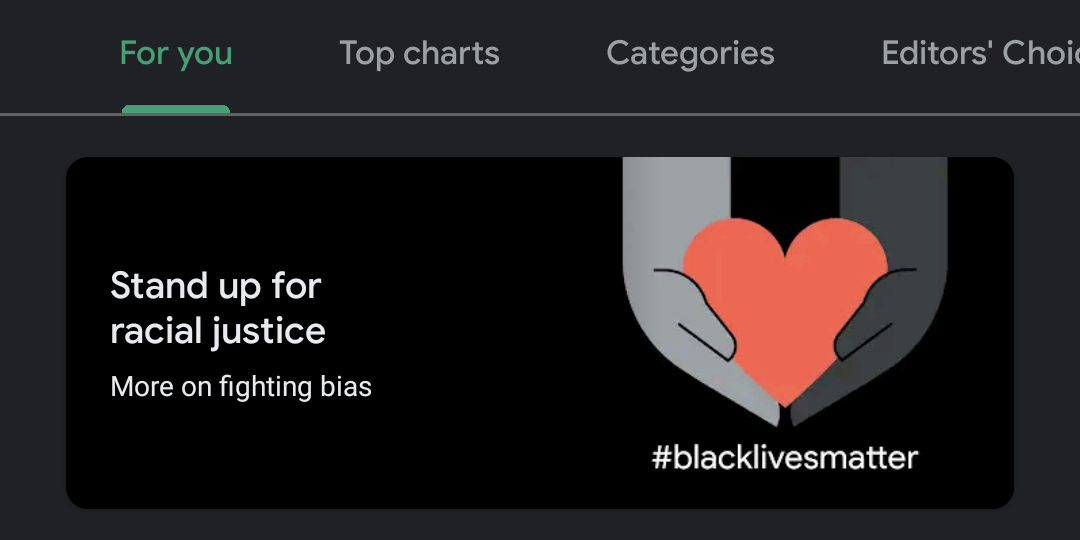 This morning, Sundar Pichai told employees that Google is working on “initiatives and product ideas” that support the Black community. The US Play Store is now featuring a resource on fighting bias.

Google Play’s “Apps” tab/feed on Android this evening sports a banner on how to “Stand up for racial justice.” There’s an illustration to the right with “#blacklivesmatter” below it. Intended to promote “more on fighting bias,” it links to the Center For Policing Equity.

Today, the commitment of equity and inclusiveness within the police department itself and throughout the service community remains strong. Center for Policing Equity’s work continues to simultaneously aid police departments to realize their own equity goals as well as advance the scientific understanding of issues of equity within organizations and policing.

Pichai called them a long-term partner today with Google donating $1 million to “meet the urgency of the moment.” This is part of $12 million in funds to “organizations working to address racial inequities.”

The CEO acknowledged that supporting groups is “not a replacement for doing the harder work ahead both within and outside of Google,” and that the company would “develop initiatives and product ideas that support long-term solutions.”

The banner in Google Play, which will reach tens of millions of users in the US, looks to be part of that effort to raise awareness. Hiroshi Lockheimer, who leads Android, Chrome OS, and the Play Store, this afternoon said he was “thinking hard” about what the team “can *uniquely* do to help.”

I've been thinking hard about what I can do to help. In addition, what are the things that we as a team can *uniquely* do to help. I'll start by saying: racial injustice is not ok. I stand with the black community. Just wanted you to hear me say that.

Over the weekend, Google also had a message expressing solidarity for racial equality on the Search homepage and YouTube.com.