Galaxy A51 Review: Samsung made most of the right mid-range choices 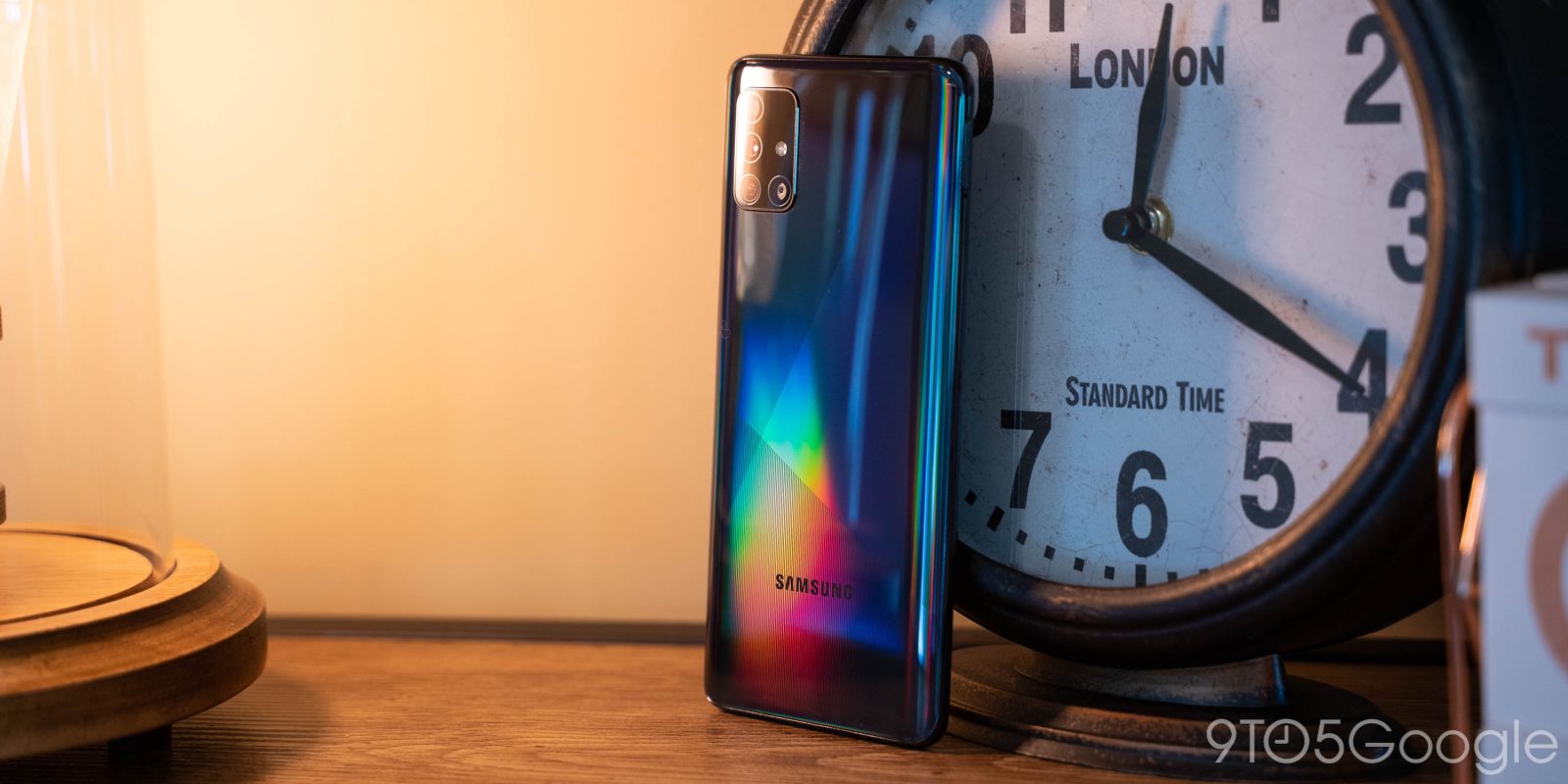 Samsung’s flagship phone often gets the most attention, but the company’s most successful smartphones are the ones that cost less than half that price. Lately, I’ve had the Samsung Galaxy A51 in my pocket, the successor to the company’s most popular smartphone in 2019. Is it worth picking up? Let’s talk.

To craft its Galaxy A51, Samsung used nothing more than plastic, and it’s not bad! The overall build quality here is solid, though not quite perfect. The body of the phone is tough, with even a bit of pressure not giving any audible creaks or noticeable give. The frame, too, is curved and comfortable to hold. The buttons are responsive and clicky as well.

The back panel is an impressive part of the design. There’s a slick reflective design with angles and lines. In bright lighting, it looks really cool. You’ll probably just throw a case on it anyway, though, so this doesn’t matter all that much in the end.

Rounding out the outer hardware, there’s a quad-camera array at the top of the device which is slim enough to where it’s barely noticeable. There’s also a USB-C port at the bottom of the design, a single speaker which is backed up by the earpiece. There’s also, thankfully, still a 3.5mm headphone jack.

Out of the box, the US Unlocked Samsung Galaxy A51 I’m using was running on Android 10 with One UI 2.1. It also has the June 2020 security patch at the time of writing this review. The verdict there? Pretty good!

One UI is a well done skin over Android, at least for the most part. It looks good, adds a lot of very useful features you don’t find on many other Android phones. The only complaints I really have about One UI on this phone are related to performance.

For one, Samsung’s skin is heavy on killing background apps. Often, notifications are heavily delayed on this phone. Telegram, for example, is where I often chat with friends, but sometimes it’ll take up to an hour for notifications to come through on the A51. One night, I left the phone in the living room while a group conversation went off. The notifications didn’t ring immediately, but rather synced one-by-one about 20 minutes later and had my phone ring it’s “do do DO DO DO” tone repeatedly for several minutes. Simply put: infuriating.

Performance as a whole, too, just isn’t amazing. I encounter lag and just general jankiness on a regular basis on this device. It’s not constant, but it’s far too common. Running on 4GB of RAM and the Exynos 9611, performance shouldn’t suffer so much.

My workload on this phone wasn’t particularly heavy either. A couple of messaging apps, Slack, email, social media, and web browsing were my daily use cases on this device. Web browsing was one area especially where I noticed trouble. As I just purchased a home, I’ve been spending a lot of time navigating the Home Depot website, and it slows to a crawl on this device. The Amazon app, too, is a horrific nightmare to use, but it’s even worse on the Galaxy A51.

Everything here is something most people can deal with. It’s good enough to get by, but when phones at the same $399 price point — Pixel 3a/4a and iPhone SE come to mind — perform better, it’s hard to swallow.

At the end of the day, every budget phone that’s ever been released has been a matter of priorities. To fit the price constraint, there are tough calls with every specification, every component, and every last bit of the design. With Samsung, the clear priority with the Galaxy A51 was the screen, and in that area I think this phone is a success for the most part.

The 6.5-inch AMOLED display on the Galaxy A51 is a 1080p panel which, really, is just top-notch. There’s almost nothing wrong with this display. It’s bright, vivid, and sharp too. It’s also a big screen, but given the very slim bezels on all sides it’s still more than manageable.

Perhaps my only major complaint is the hole-punch design. The centered cutout isn’t large and, really, not all that obtrusive either. The complaint is that there’s a slim, silver ring around the camera sensor that only draws attention to the cutout. With a normal hole-punch cutout, there’s no discernible border, but the shiny silver border on the A51 often feels like demands your attention. I’m sure there’s some technical reason it exists, but it’s a very annoying aspect of an otherwise fantastic display.

Photography is usually one of the first things to give out on a mid-range smartphone, and the Galaxy A51 isn’t all that different. Samsung’s commercials highlight the “awesome camera,” but I’d argue they’re really not that great.

There’s a 48MP primary sensor that you’ll be spending most of your time with. It’s decent, but picky. Some shots taken by this phone are stunning, but others are downright awful. This mostly has to do with lighting. Outside, your pictures will look great 9 times out of 10. Inside? More like 5 out of 10. The ultrawide camera is a 12MP sensor and it’s a similar story. Sometimes it’s great, other times not so much.

The added macro and depth sensors are only 5MP sensors, and they’re really not impressive by any means. They feel like tacked on afterthoughts just to achieve a “quad-camera” marketing tagline. The front-facing 32MP selfie camera, though, is pretty good!

The short story here? Samsung did alright here. The cameras aren’t amazing, but they’re passable. Still, given the competition in this same price point, it feels like Samsung should have put a lot more effort in.

Inside the Galaxy A51, there’s a 4,000 mAh power pack that charges over USB-C. There’s really not a whole lot to say here. There’s more than enough juice for a full day of power for most people. On average, I ended my day with at least 25% left in the tank and around three hours of screen time in the dust.

Charging is done over USB-C, which is great, but there’s no wireless option. That’s a shame, but somewhat expected in the price range. USB-C charging is relatively quick too, though it feels like it sometimes struggles to pull fast speeds over traditional USB-C Power Delivery, the standard your laptop is probably using. That’s a shame too, but the included charger is still solid and will be more than enough for most folks.

In the display of the Galaxy A51, there’s an optical fingerprint sensor. It’s… not great. In-display fingerprint sensors are still in their infancy, which means the tech is far from perfect. The OnePlus 8 series is the current king of the hill, and the A51 does nothing to attempt that crown.

The sensor here is slow and relatively inaccurate. It usually takes me at least two tries to get into the phone, and often I’m pressing down several times or resorting to a PIN to unlock.

In-display fingerprint sensors just aren’t worth it on most phones. Unless you have the budget to get it right, just don’t use it. The Galaxy A51 is a good example of ignoring that advice.

Audio coming from the Samsung Galaxy A51 isn’t half bad. There’s a single speaker at the bottom of the phone which is backed up by an earpiece at the top. Overall quality is alright. It lacks depth and doesn’t get extremely loud, but it’s absolutely passable for most scenarios.

Besides, there’s a headphone jack anyway, so all is good in audio land.

Vibrations are something that many people overlook when buying a smartphone, but there’s a huge difference in quality between everything out there. Where does the Galaxy A51 fall on the spectrum? It’s fine. The haptics aren’t anything to be excited about, but they could be way worse.

Samsung gets a lot right with the Galaxy A51. The display is excellent, the design is really nice, the camera is passable, and the price is great, too! It really only struggles in the performance department. Admittedly, that’s a huge area of concern and may be a deal-breaker for you.

If it isn’t, the Galaxy A51 is available unlocked from B&H Photo, Samsung.com, Amazon, and other retailers. You can also pick carrier models (often with killer deals) from Verizon, AT&T, and also from Best Buy.