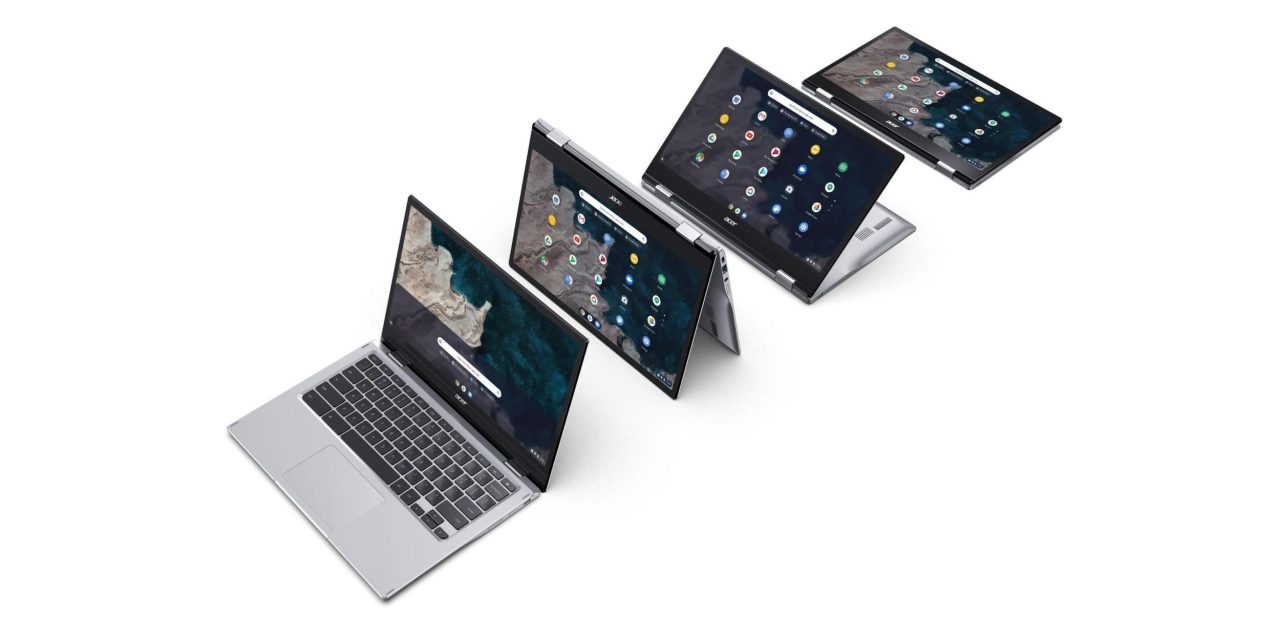 Qualcomm announced the Snapdragon 7c compute platform last December alongside the Snapdragon 765 and 865. It features an octa-core Kyro 468 CPU built on an 8nm process and integrated Adreno 618 GPU. It’s paired with up to 8GB of LPDDR4X RAM and 128 GB of storage. Acer touts “enhanced multitasking and responsiveness,” as well as graphics performance allowing for “online games and beautifully streamed video.”

In the Chromebook Spin 513, the processor contributes to 14 hours of touted battery life, while an optional 4G LTE radio is available. That’s matched with 802.11ac Wi-Fi (2×2 MIMO) and Bluetooth 5.0.

The ultraportable’s design is fairly par for the course, starting with a silver aluminum top cover and Gorilla Glass on the 13.3-inch full HD IPS display with a 78% screen-to-body ratio. A 2-in-1, it weighs 2.64 pounds and is .61-inches (15.55mm) thick.

The keyboard has an optional backlit configuration, while the trackpad is also protected by Corning glass. Other specifications include dual microphones, USB-A, and two USB-C ports.

Acer will sell the Chromebook Spin 513 (CP513-1H) from $399 in North America this coming February. It will be available a month earlier in EMEA starting at €429. An Enterprise edition is coming in March for $699.99.

On the work front, Acer today also announced the Chromebox CXI4. Aimed at schools, SMBs, and families, it can be purchased with Chromebook Enterprise Upgrade – Chromebox Enterprise. It’s powered by an Intel Core i7 with a slew of connections: up to five USB-A, USB-C, two HDMI, RJ45 Ethernet, headphone jack, and microSD.

The last Google unveil today is not another Chrome OS device. Rather, the Acer Halo Smart Speaker is powered by Assistant with a tall, rectangular pillar design. Primarily fabric-covered, it uniquely features RGB-base lighting.

It can sync with music to “set just the right vibe or choose a color scheme suited for day or night.” On the technical front, it features DTS sound that’s projected 360 degrees and has two far-field microphones. There is a mute switch to disable the microphone. The top surface also features volume up/down and play/pause.

There’s an LED display embedded into the fabric covering. Positioned above the four Google Assistant indicator dots, you can use it to check the time or weather. A future customization will let users display a message or “simple image”

Acer’s Halo Smart Speaker is first launching in EMEA this December. It will come to North America in Q1 2021 for $109.