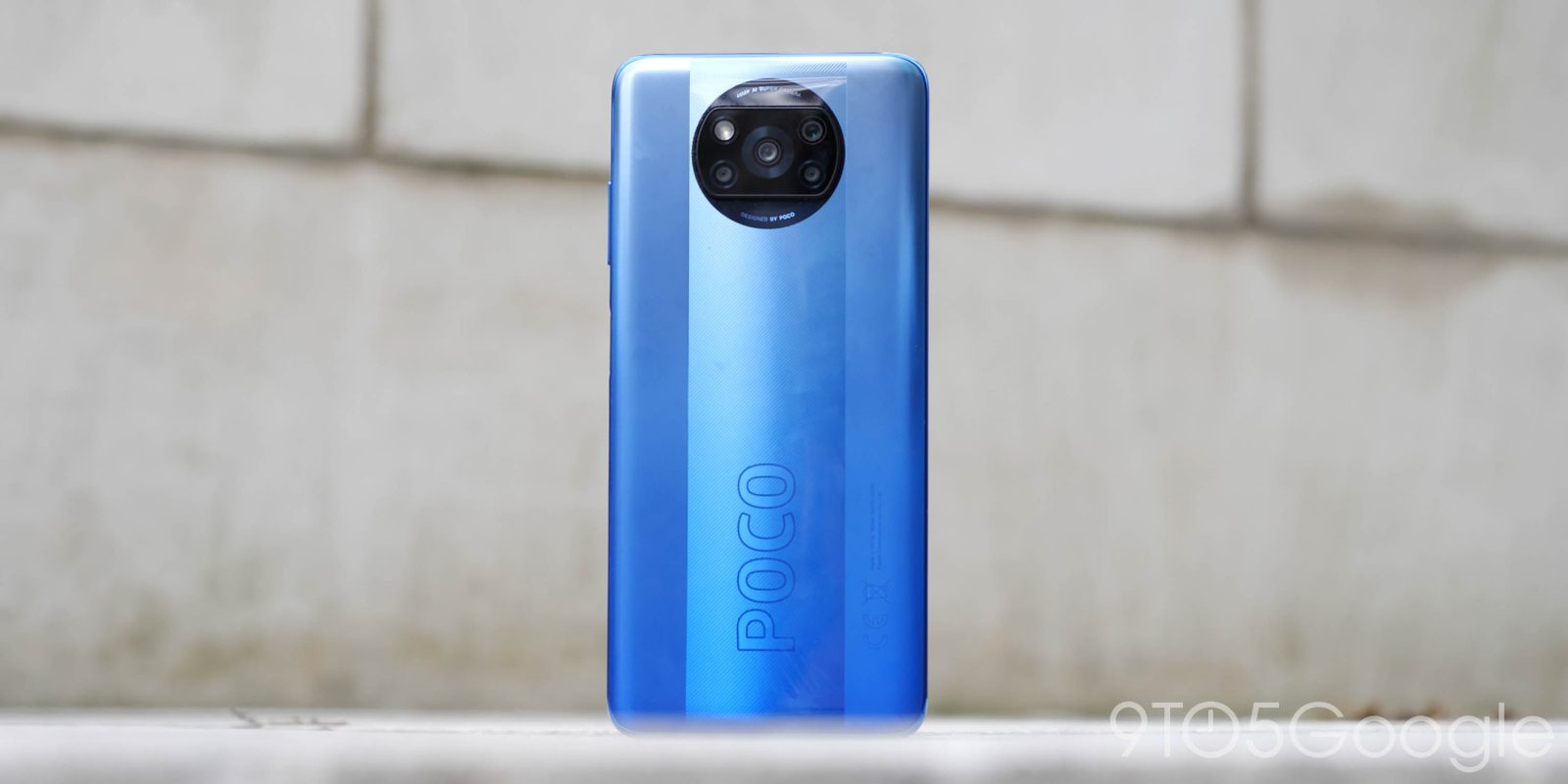 The Xiaomi Poco X3 Pro is a good phone trapped between two price points and living in the shadow of the excellent Poco F3.

We’ve seen a whole raft of affordable Xiaomi devices bombarding the market over the past couple of months. The firm has even attacked the premium segment but as a champion of value smartphones, the Poco X3 Pro is firmly at the affordable end of the spectrum.

It does a lot of things well and might be a compelling option for those searching for a new smartphone but with a tight budget. This is our full review of the Poco X3 Pro.

If you like the Poco X3 NFC’s chunky hardware, then you’ll be right at home with the X3 Pro. Xiaomi has just added or tweaked a few small areas for an overall design that is instantly familiar but simultaneously feels slightly better for it. The chassis remains mainly polycarbonate, which should mean that daily abuse won’t prove an issue — especially as adding a case makes this “thicc” phone even thicker.

I have a real affinity toward the Steel Blue color, as the soft satin sides are punctuated nicely by the brighter blue strip that hosts the “POCO” logo. The logo is embossed and more visible when viewed face-on and just disappears when the X3 Pro is held at an angle. You’ll either love the brashness of this design or you’ll hate it. I kind of dig it but completely understand why you might hate it.

Like the X3 NFC, the Poco X3 Pro is a chunky hunk of tech. There’s a real weight that, although polycarbonate, feels very good in the hand thanks to those soft curves at each side. It’s a tried-and-tested form, which only benefits the overall usability. Although, I still don’t really like the button placement here. The volume rocker is far too high on the upper right side — and I say that with large hands.

The power button is another sore point as it’s mushy and cheap feeling. Luckily, the recessed power button has a fingerprint scanner that is very fast and accurate. It’s a trade-off that works on many other cheap smartphones, and the same can be said here.

Stereo sound is offered with a combination of a bottom-firing speaker and the earpiece. At full volume, the entire chassis vibrates, but it doesn’t affect the sound quality. It’s not exactly great for music, but for videos and movies the sound profile is fairly good. There’s the bonus of a 3.5mm headphone port up if you want to plug in some speakers or a pair of decent cans.

Xiaomi appears to have gone all-in on 120Hz displays even on the firm’s affordable lines. The downside? The Poco X3 Pro comes with a 120Hz LCD screen rather than a far more preferable AMOLED display. It’s still a solid LCD that benefits massively with the higher refresh rate. Will it wow you? Probably not.

It doesn’t get as bright as many of its contemporaries, but you shouldn’t have any major legibility issues in bright sunlight. There is a very minor color cast at lower brightness levels, but it’s hard to notice unless you’re in a very dark room. Light bleed in the corners is visible when viewing deep colored images or UI portions, which is noticeable and could be a major pain point for you.

My biggest gripe with LCDs, in general, is that black reproduction is never quite up to levels I’d like or desire. Things can sometimes look deeper gray rather than black. The Poco X3 Pro does suffer in that regard, but it’s not to the detriment of the smooth experience. Although to contradict myself, there is some image ghosting on this panel. You’ll notice most often when scrolling quickly and slow down. It’s not too distracting, it’s just something to note, and given the cost of this smartphone, it’s not a dealbreaker.

Things are interesting with the Poco X3 Pro performance levels, and it’s more or less all good news. The weird thing here is that the Qualcomm Snapdragon 860 is effectively just a rebranded Snapdragon 855+. In performance terms, it’s not quite at the same level as last year’s high-end flagships, but it’s still very capable.

I quite like this approach of overclocking existing chipsets and then packing them into budget devices, as it actually gives you some major graphical performance benefits over mid-range chips. Sure, the power efficiency isn’t going to be quite as good, but you can leverage that with a massive internal cell — something that Xiaomi has done here and continues to do on many of the Poco lineup.

It’s practically faster than the Pixel 4 XL, which itself is the most powerful Google-made smartphone and still a fantastic performer. That’s impressive given that the Poco X3 Pro comes in at well under $300 and has plenty of other bonuses on offer.

Having reviewed a ton of Xiaomi devices in recent months, MIUI 12 has still not grown on me enough to be my first choice of Android skin. That said, the wealth of features is a major draw for those wanting to tweak, tinker, or just toy with their smartphone.

I can’t think of a single thing that has caused problems with the Poco X3 Pro day-to-day. Sure, MIUI does cull background app processes a little too often for the sake of battery longevity, but overall it’s snappy and smooth. Gaming is also a breeze with very little you can’t play at the highest graphical settings and fidelity. 5G connectivity was a big miss for me and it might be something to consider if you are an ardent mobile gamer, but I must admit that I saw no real issues when using 4G mobile data connections for multiplayer games.

There really isn’t much to write home about when it comes to the camera setup on the Poco X3 Pro. It looks identical to the odd-shaped bump at the back of the Poco X3 NFC, but there are some minor tweaks here and there.

If you value camera performance, then this ain’t it, chief. Sure, you’ll get solid photos from the 48-megapixel main sensor in good lighting, but overall it’s a fairly middling camera system for a smartphone in this price segment. The 8-megapixel ultrawide is pretty “meh” in that any stills look incredibly soft compared to the main wide shooter.

Personally, I think you’ll be really happy with the shots offered up by the X3 Pro. There is a fair amount of added digital sharpening that can be spotted when cropping in though. Colors can be exaggerated a little but overall the quality is slap bang in the middle of the road for a budget setup such as this.

One frustration is the lack of 4K 60fps video recording option, even though the Qualcomm Snapdragon 860 chipset is more than capable of handling the encoding at this frame rate and resolution. It’s not clear why Xiaomi hasn’t enabled the option, but the video quality is, again, not exactly brilliant but acceptable given the price the Poco X3 Pro is offered at.

Using the Poco X3 Pro as a secondary device with a backup SIM installed. It was an actual battery beast in my experience, even when I decided to rock it as my solo smartphone for a short period. I simply could not kill it in a day of my heaviest usage patterns.

This included several hours of 4G data usage playing and testing Call of Duty Mobile and general texting, instant messaging, and even some photo taking. It’s dependable over a two-day period for me and if I reduced my load, I might even be able to pull two and a half days without needing to grab the charger.

I wouldn’t call the 33W charging super fast, but it tops up the large 5,120mAh internal battery in less than a couple of hours from under 10%. That is a win-win for me as someone who doesn’t want to charge a device every single day wherever possible.

I loved the Xiaomi Poco X3 NFC when reviewing it, the Poco X3 Pro simply ups the power while retaining almost all of the same DNA. The result is a great smartphone that may be labelled “Pro” but ends up coming across more “Lite” in execution. That isn’t necessarily bad as the X3 Pro is still very, very good for the price. It’s just that there is a far more compelling option in the recent Poco lineup.

If you simply must have the best bang for your buck, then I suggest looking squarely at the Poco F3. It has enough leaps in performance and slightly better design to make it a smarter overall choice. Tossing that notion aside though, it’s hard to deny that the Poco X3 Pro is yet another impressive Xiaomi-made smartphone that will still be a good option if you want longer battery life, some neat hardware touches, and a 3.5mm headphone jack.