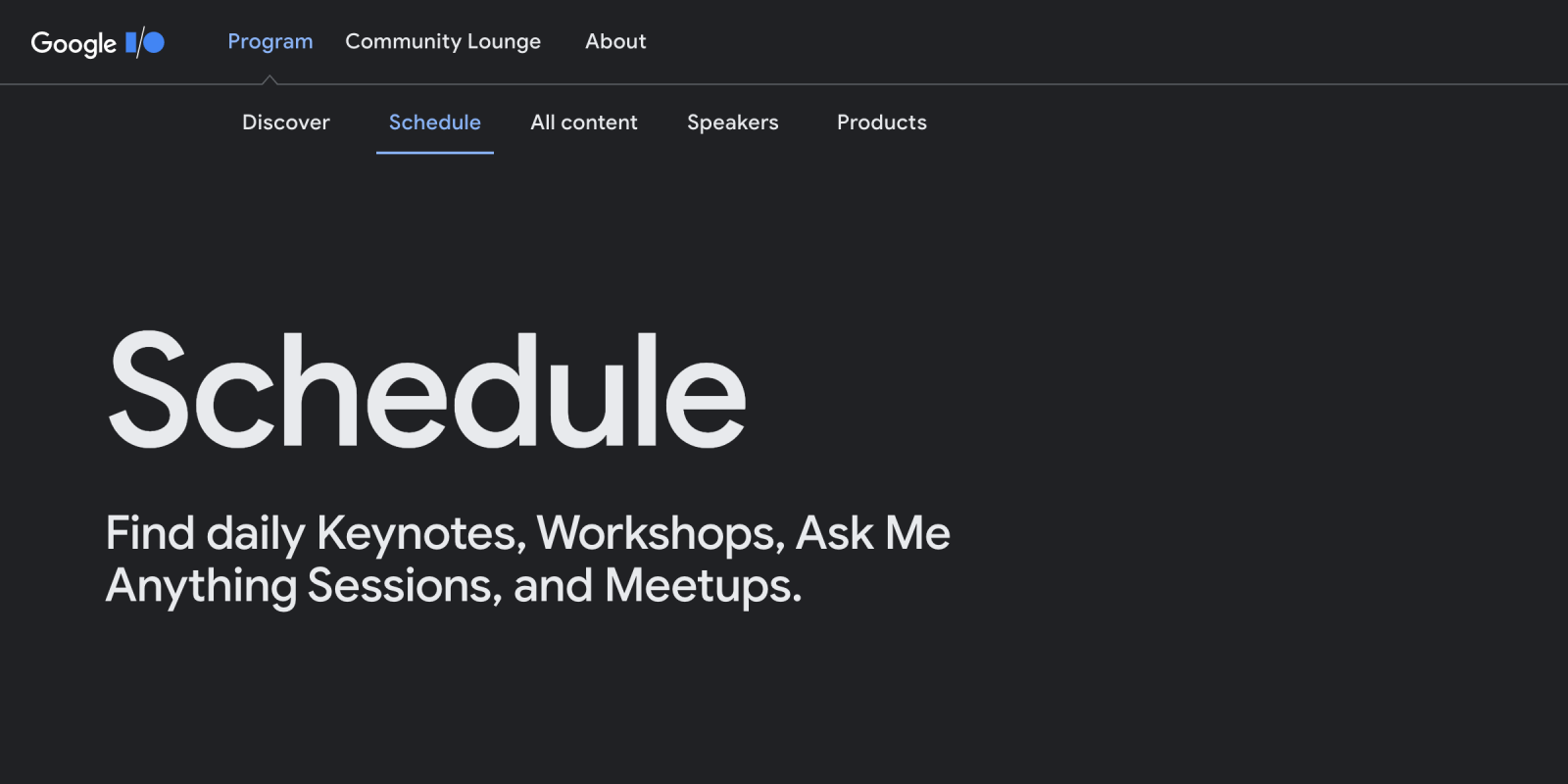 The initial I/O 2021 “Program” — as it’s called this year — of sessions was released today and we have our first glimpse at what to expect from Google’s developer conference.

Historically, the full Google I/O sessions list is not revealed until after the kickoff keynote as some products are kept under wraps until they are announced onstage, and that will presumably continue in 2021.

For 2021, the biggest “What’s new” events are classified as “Keynotes” and given a set time on the schedule. Besides that main one and the Developer presentation, others include:

There are also several other “What’s new” videos categorized as “Sessions”:

Besides keynotes and sessions, I/O 2021 will see interactive “Workshops” where instructors walk you through codelabs and where Q&A is possible. There will also be Ask Me Anything Sessions, with both requiring a reservation. In lieu of physical Sandboxes, the Learning Lab will be home to livestreamed workshops, lessons, demos, tutorials, and resources.

Each workshop will be led by a Googler providing instruction alongside a team of Googler TAs, who will be there to answer your questions via live chat.

There’s currently a session called “Now is the time: What’s new with Wear” and a “Create your first Tile in Wear” workshop. Both, along with a speaker bio, curiously drop the “OS” from the name of smartwatch platform, which is officially called “Wear OS by Google.”

Get an overview of all that’s new for Google’s smartwatch platform. We’ll cover the latest platform updates and share a range of new APIs, tools and more to help jumpstart your development for wearables.

Android 12 should get a large chunk of the keynote to show off the expected visual overhaul. There are a slew of sessions discussing other changes and developments, including one called “Refreshing widgets.”

Widgets are getting a new look in Android 12! Join this Session to learn more about all the ways we’re making it easier to build useful, discoverable, and beautiful widgets on Android and Assistant.

As of DP3, the only change made to widget design is rounded corners, like the rest of the operating system.  More updates could be coming as widgets get renewed interest. We’ve already seen the redesigned widget picker, but there could be an “easier” way to develop and make them look nicer. Meanwhile, this session also mentions widgets with Google Assistant.

Speaking of Assistant and Android, Google continues to encourage app developers to integrate both.

Learn how to easily add voice capabilities to your Android app with Google Assistant. In this Session, you’ll see how to quickly guide users into your app with a voice command using App Actions.

How to voicify your Android app

Now that you’ve added a layer of voice interaction to your Android app, learn what’s new with Android Shortcuts and how they can be extended to the Google Assistant.