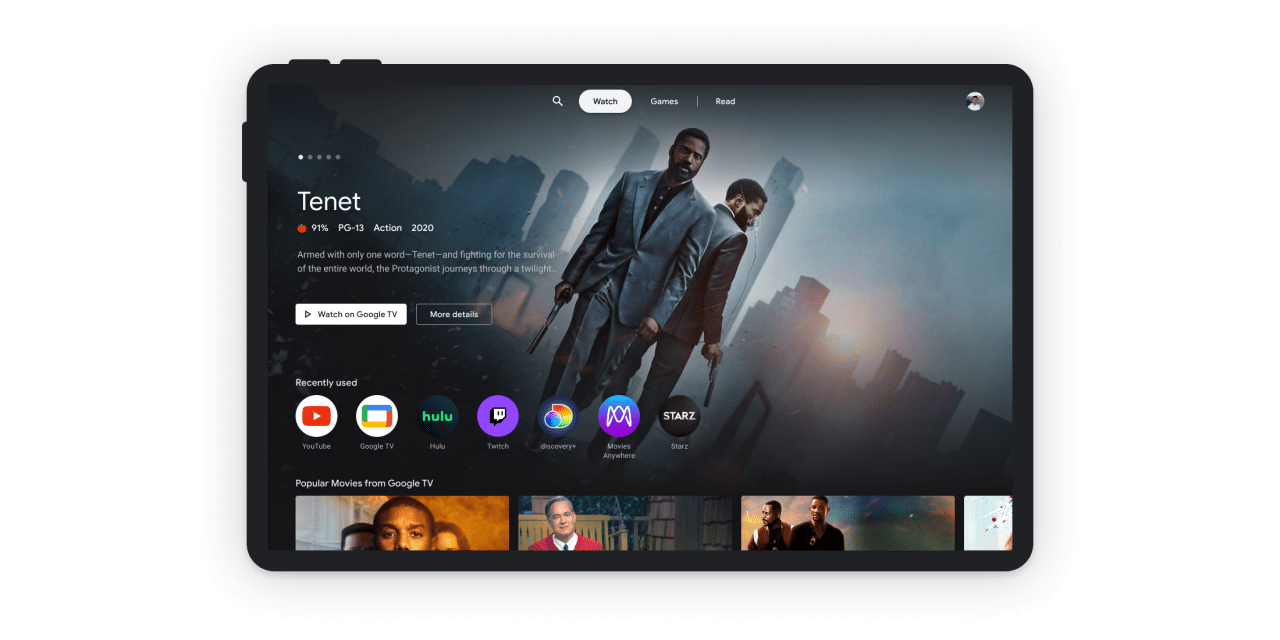 The iPad has basically taken over the entire conversation when it comes to tablets, and frankly, Google hasn’t done much to fight that battle, even throwing in the towel when it comes to self-made tablets. Today, though, Android tablets are getting a boost with a new “Entertainment Space” experience from Google similar to the “Kids Space” that launched last year.

Rolling out soon, the new “Entertainment Space” experience is designed to give Android tablets a one-stop shop for all things media. This includes games, movies, TV shows, and books. The interface for this product pulls heavily from Google TV, but obviously focuses on content beyond the big screen.

There are three tabs to “Entertainment Space” — Watch, Read, and Play. The “Watch” tab is the one that has the most in common with Google TV, copying the platform’s signature row of recommendations at the top. There are also further rows of content underneath and shortcuts to movie/TV apps installed on your device including Hulu, YouTube, and more. If you ask me, it’s a genuinely slick UI.

Beyond that, the “Games” tab pulls together any games installed on your device and also pulls recommendations from the Google Play Store. There are also links for games that support Instant Play that launches the game without needing a download. It’s unclear at this point if this tab has any Stadia integration, but there’s none we can see from Google’s provided screenshots.

Finally, there’s the “Read” tab. This one pulls from Google Play Books app, seemingly exclusively, and includes quick-resume buttons for books you’re actively reading. There are also recommendation rows beneath for other books from different categories which, again, are powered by Google Play. Further integration with apps like Kindle seems like a no-brainer for this tab, but it’s unclear if that will be supported.

If you have an Android tablet, you can expect this experience to roll out in the coming weeks. Specifically, Google says that the feature will be available to Walmart’s Onn tablets starting this month. From there, Android tablets from Lenovo and Sharp, among other undisclosed brands, will get access to “Entertainment Space.” Google was unable to confirm if the feature will be available on Samsung tablets.