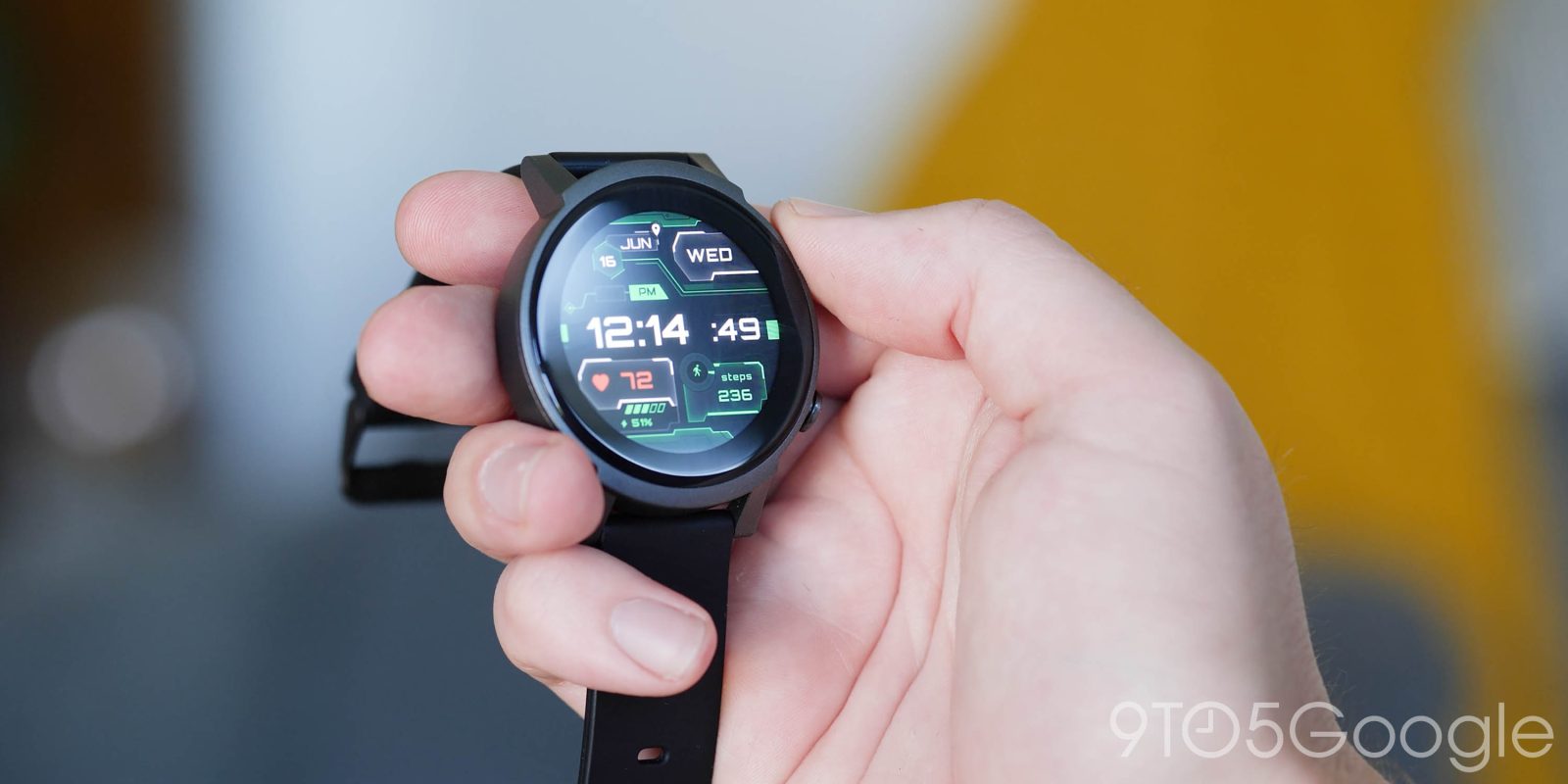 It’s taken a while, but only the second smartwatch to come packing the Qualcomm Snapdragon Wear 4100 has arrived in the guise of the TicWatch E3, which oddly, is the second such watch from Mobvoi.

At under $200, the Mobvoi TicWatch E3 comes in a full $100 cheaper than the TicWatch Pro 3, which is the best Wear OS watch you can buy right now. The usage of the latest chipset alone is likely enough to pique the interest of people looking for a replacement for an older Wear OS smartwatch.

Don’t come with the expectation that the TicWatch E3 will be in any way premium, as this is Mobvoi’s cheap Wear OS smartwatch for mid- to late 2021. Plastic and rubber dominate the silver and black casing. This is great for long-term durability and it reminds me very much of the numerous toy “dumb” watches you can pick up.

This is a thick watch – 12.6mm to be precise. That means that the TicWatch E3 protrudes substantially from your wrist. It’s noticeable, to say the least. Really though, this is effectively just the core TicWatch E2 chassis with some minor changes and upgraded internals.

As for the changes, there are now two crown buttons. This is infinitely better than the squishy solo button that was found on the previous generation. One launches into the Wear OS menu, while the other launches directly into an app of your choosing. It’s the exact same as on the TicWatch Pro 3, which makes a lot of sense from a usability perspective.

One major bonus is that the speaker has also returned. It was unceremoniously removed from the previous generation, but Mobvoi has restored it here on the TicWatch E3. For phone calls, notifications, workout updates, and Assistant feedback, it’s acceptable but pretty poor otherwise.

A 360-by 360-pixel display is nestled within the face of the watch, which measures at 1.3 inches. It’s fairly good but the biggest downside is the large bezel surrounding the display itself. It can be quite distracting, and I will say it does detract somewhat from the supposed minimal design of the TicWatch E3. It’s more apparent, given how the TicWatch Pro 3 hides large bezels effectively with a chronograph. There is no such shield between your gaze and thick side bezels here, and it’s hard to unsee.

Despite the thicker profile, the Mobvoi Ticwatch E3 is almost deceptively lightweight, courtesy of the plastic frame. By “deceptively light” it’s exactly 32g without the strap. That’s enough so that you’ll notice it, but not to the point where you’ll get fatigued from wearing it all day.

The rubberized strap that comes as standard is ideal for workouts, and it’s soft enough so that it’s not stiff and uncomfortable, no matter when you wear it. It’s good to see that Mobvoi isn’t attempting to adopt the uncomfortable Apple-style loop strap that nips and rubs your wrist.

I mentioned that this is a chunky wearable. For me, it’s far too big to wear while sleeping. Because of that, I wouldn’t suggest doing so unless you really want to track your sleeping patterns.

This is one area that we have complained about for years with regard to Wear OS, and the new chipset seems to have addressed the lag, app hangs, and all-around awful performance of the Wear 2100, and to a lesser extent Wear 3100 series chipsets. Previous E-series watches were held back by the poor performance that, if not obvious within the first few days, would soon be lumbered with slowdowns, lockups, and severe lag within a few weeks.

I can’t spot any major differences between how the TicWatch E3 performs alongside the Pro 3. Sure, there are still very minor slowdowns here and there, but they are few and far between to the point I would say they are almost eradicated. The only time I noticed slowdowns is when activating the display after a long period of “sleep” or when the battery level dipped below the 10% mark.

Apps load quickly and the Mobvoi Launcher doesn’t detrimentally affect how Wear OS ticks along. At least until Google unveils or reveals the true plans for Wear OS, everything still feels a little “plain.” That’s not a negative per se, as tracking workouts, reading, and replying to notifications is likely more than enough for most people.

I feel like I’m saying this about every smartwatch at the moment, but it would have been nice to have a few more stock watch face options. You’ll need to download Facer or another third-party app to get better options, but given that this can detrimentally affect battery life, I’m personally always wary of doing so.

Mobvoi includes a whole host of apps and on-device hardware for tracking a wide range of your health stats with the TicWatch E3. You’ve got GPS for distance tracking, although I can’t speak for the overall accuracy, it doesn’t quite seem as accurate as the Fitbit Sense thus far.

SpO2 tracking and constant heart rate monitoring are also offered as part of the TicOxygen and TicHealth app. Other apps are identical to those found on the TicWatch Pro 3 including TicBreathe for breathing exercises and TicZen for tracking your “stress” levels in conjunction with that SpO2 sensor. The number of workouts you can track is not exactly extensive with 13 presets including swimming, yoga, cycling, and running.

Although not necessarily the most in-depth tracking options, the TicHealth suite of apps is a nice complement to the admittedly basic Google Fit suite and helps expand your workout tracking options. I’m still not convinced by the TicHearing app, but overall it’s a nice enough selection of tracking and monitoring apps from which to choose.

Whether it’s the new chipset or the 380mAh battery, but the battery has been very good during my time with the TicWatch E3. Two days of usage is a breeze, with a couple of tracked workouts thrown in for good measure.

As long as you disable constant heart rate monitoring, two days of lifespan are a breeze for the TicWatch E3. I even think that a little of the battery-saving Essential Mode could break the three-day barrier. That said, this requires far too many compromises to be worth the effort.

Mobvoi’s decision to use a weak three-pin charging cable is something that lets the TicWatch E3 down a little. It’s still way too easy to detach from the back of the watch accidentally, something I have done far too many times already. 0 to 100% takes a couple of hours in my experience, which is about what you can expect with just about any wearable in 2021.

If you want the best value Wear OS watch right now, then Mobvoi’s TicWatch E3 is a complete and utter no-brainer. The fact that there is only one other Wear OS watch touting the Snapdragon 4100 chipset also helps make any purchase decision for you.

The chunky design will likely prove to be great for long-term durability if you’re an active person. I still feel that it would have been nice to see the display bezels slimmed down a little. Overall, there is just enough difference here from the TicWatch Pro 3 for people not wanting a bigger, slightly bulkier smartwatch.

While all of this is good news, it may actually be worth holding out a little longer before pulling the trigger to see just what Samsung is planning for the Galaxy Watch 4 later this year. However, until Fossil decides to release a smartwatch packing in the latest chipset, you’ve got a choice between Mobvoi Wear OS watches – and that’s both good and bad. It’s also important to note that we don’t know how updates are going to be handled moving forward, which might be something else to consider before pulling the trigger.

Where can I get the TicWatch E3?