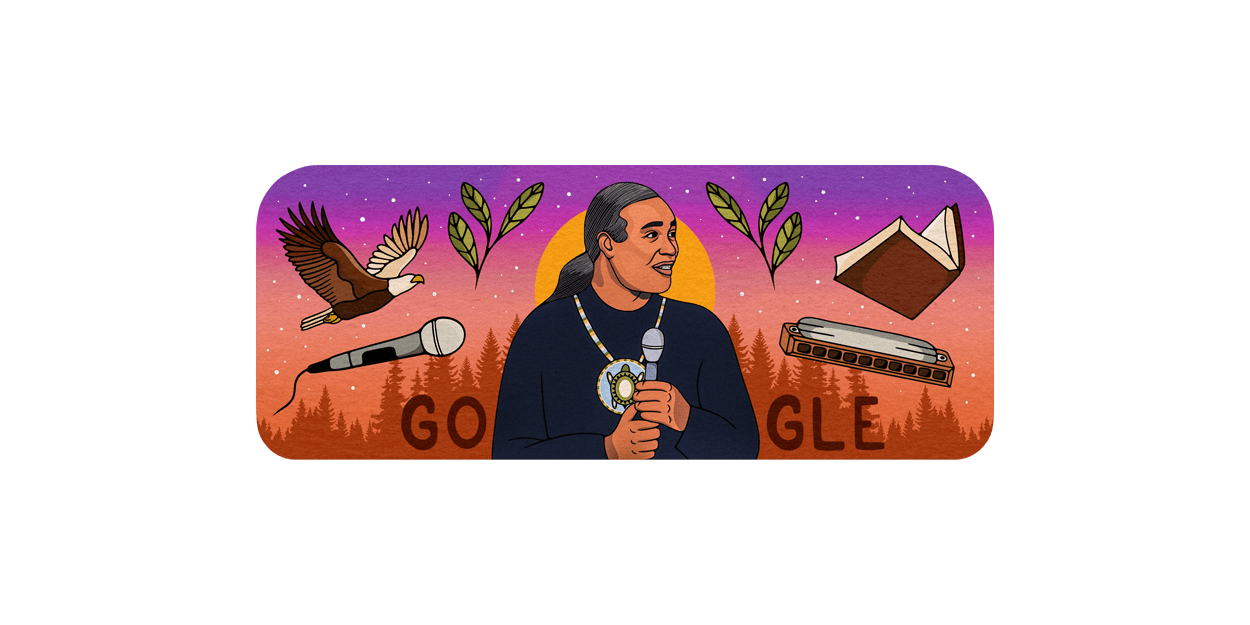 The latest Google Doodle pays tribute to Charlie Hill, the first Native American stand-up comedian to be on a nationally broadcast television show.

Charlie Hill was born on July 6, 1951 — 71 years ago today — in Detroit, Michigan. At the age of 11, Hill’s father moved the family back to his home on the Oneida Nation of Wisconsin’s reservation.

Shortly before that move, young Charlie Hill had begun to grow an interest in comedy. While a Native American comedian was nearly unheard of at that time, Hill was inspired by Dick Gregory who combined his comedy with meaningful activism for the cause of Native American rights.

Charlie Hill told NPR that he “inadvertently taught [himself] how to write” by writing down jokes. To work toward his dream of becoming a comedian-activist, Charlie Hill attended the University of Wisconsin-Madison, studying drama and speech.

During this time, and after his graduation, Hill was involved with various theatre troupes, including the La Mama Experimental Theater Club and the Native American Theatre Ensemble. From there, Charlie Hill moved to Los Angeles in the 1970s, in hopes of being discovered, all the while studying the routines, styles, and deliveries of other comedians.

Hill’s big break came when he was invited to perform at The Comedy Store, a renowned Hollywood venue whose comics would often go on to make their television debuts. During his time at The Comedy Store, Charlie Hill became acquainted with stars like Richard Pryor and David Letterman.

In 1977, Hill was invited to appear on Pryor’s short-lived variety show, marking the first appearance of a Native American comedian on national television.

— Charlie Hill, in an interview with ICTMN

Following this performance, Charlie Hill went on to make multiple appearances on late night talk shows including The Tonight Show and Late Night with David Letterman. Hill also made numerous guest appearances on shows like Roseanne and Moesha. His comedy often sought to subvert and fight back against stereotypes of Native Americans, to act as a force for good.

Charlie Hill died on December 30, 2013, after a battle with lymphoma.

Today’s Google Doodle celebrating the life of Charlie Hill was created by French-First Nations artist, Alanah Astehtsi Otsistohkwa (Morningstar) Jewell. On the Google Doodle blog, the artist shares part of her creative process, including a feeling of kinship with Charlie Hill, as well as some rough drafts of the artwork.

I drew a lot of inspiration from Charlie’s work, as well as elements found in Creation. I studied Charlie and learned so much about the things that he loved. He was a very creative and intellectual person and so I wanted to depict him doing the things he loved most: playing the harmonica, performing, making people laugh, reading, representing Indigenous people and paving the way for other Indigenous performers. Charlie resonated with sunsets and forests, and so I wanted him to be in his favourite places doing his life work.