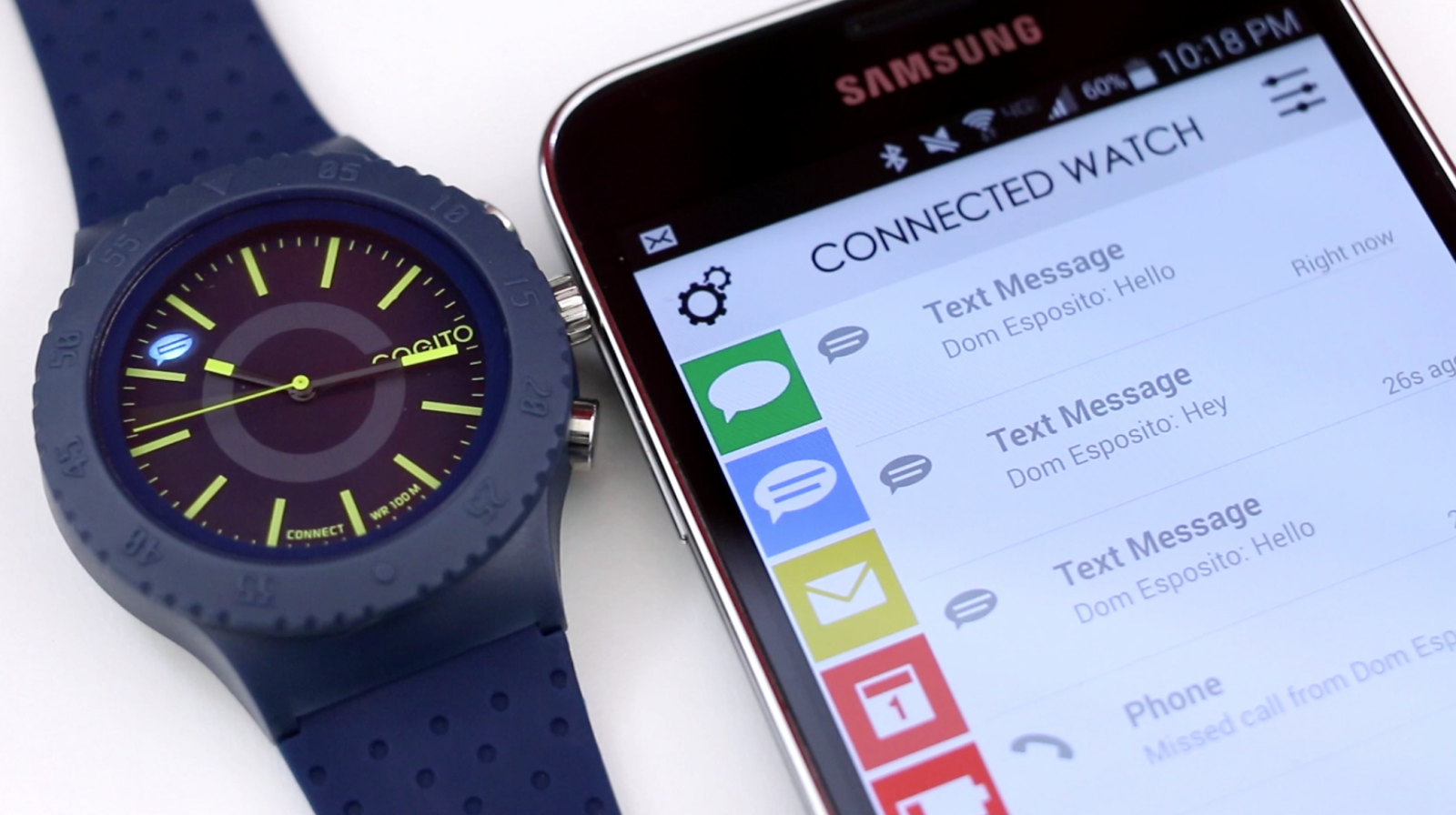 When you put the word “smart” in front of anything, most people tend to think that it’s going to be some kind of advanced product. Most smartwatches on the market have a display and offer a simplified (or detailed) look at information from your smartphone along with access to third-party apps and services.

CONNECTEDEVICE is the company that’s trying to put the “watch” back in smartwatch. What if your smartwatch was created with the primary purpose of showing the time? Well, that’s exactly what the Cogito Pop does. It offers style and functionality, but don’t expect anything fancy here. The Cogito Pop puts notifications on the back burner and that’s not necessarily a bad thing.

At first glance, this looks like a normal watch. There’s absolutely nothing from it’s appearance that would indicate that it has any type of smart features. It just looks like a good old-fashioned watch with a couple of buttons on the side. Surprisingly, this watch does connect to your device via Bluetooth and displays notifications for text, email, social network interactions, alarms, phone calls, and more. It’s also made out of plastic, but that’s not really different from any other smartwatch that’s currently available.

Check out the video review below:

The Cogito Pop uses four simple LED notification icons that sit at the top of the watch’s face. This is about as simple as a smartwatch can be. When you receive a notification, the watch will vibrate and one of the related icons will illuminate. The icon will continue to blink until you acknowledge the notification on your device or press the top button on the watch. In a nutshell, that’s what makes the Cogito Pop a smartwatch. Setting up the Cogito Pop is very simple. Download the “Connected Watch” app from the Play Store and pair it via Bluetooth with your Android 4.3+ device. The app is extremely simple, but what more do you need to manage notifications and four LED lights? The best part is, you’ll never have to charge this smartwatch. It runs on two small watch batteries that CONNECTEDEVICE says will last up to one year. It also carries a 100M water resistance rating.

The Cogito Pop also offers a remote camera shutter button that can be used with the camera interface within the Connected Watch app, a smartwatch finder that will cause the watch the beep and vibrate in case you’ve misplaced it, a phone finder feature, and music controls.

In my experience, the remote camera shutter wasn’t very impressive. Like I mentioned, this feature will only work within the Connected Watch app’s camera interface, and overall, it’s very slow (see the video for a demo). The music controls work, but I’d hardly call them “controls” because I really only had the option to play/pause music. After some searching (outside of the instructions), I found a post on the company’s Facebook page noting that holding down the top button for three seconds will skip tracks. Novelties aside, the core notification features of the watch are great. It may be a very low-level alternative to today’s smartwatch standards, but some people would prefer this over something like a Pebble. For example, my wife is a medical professional and she’d much rather have something like the Cogito Pop instead of a flashy smartwatch. She actually finds this to be more beneficial in her line of work than any smartwatch with a display that would draw unnecessary attention.

Overall, I found the watch to be useful, but the real downside here is the price and that it lacks a backlight, so you won’t be able to check the time in the dark. Currently, the Cogito Pop retails for $129.95. In my opinion, that’s a little too much money to spend for what you’re actually getting, but there’s definitely a place in the world for this kind of smartwatch. For $20 more, you could purchase a Pebble, but again, some people prefer this type of simplicity. For a closer look at the Cogito Pop, check out the video review above.

The Cogito Pop is available in a wide variety of colors from the company’s website or on Amazon.