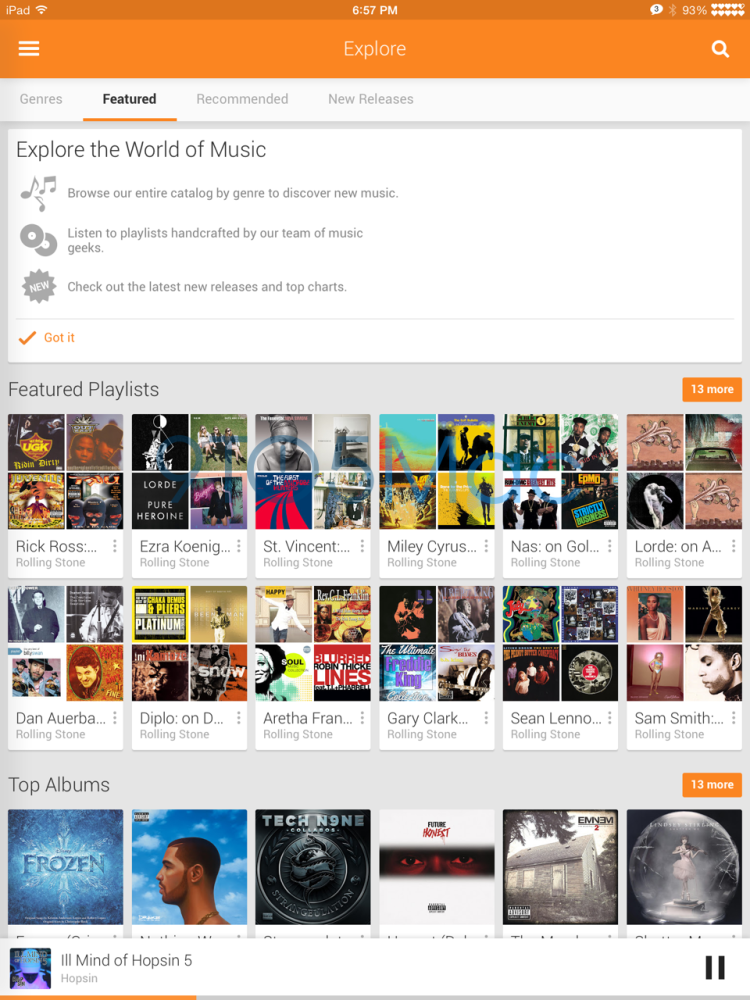 We’re hearing that Google Play Music for iPad is getting close to release and a tipster has sent in a couple of videos showcasing what he/she claims is a pre-release of the new app. We’ve heard independently that Play Music for iPad was getting close to delivery and our tipster says this is a development build (see update below). The app will function similarly to the iPhone version, but redesigned for iPad.

We are still somewhat skeptical of the screenshots below, but the app’s functionality (shown in the videos) seems to be very similar to the iPhone version and it would make sense for Google to release it for iPad. Though we’re still unsure if the update will arrive as a universal build or if Google will have separate versions available in the App Store.

Google Play Music was released for iPhone back in November 2013 and launched with a free 1-month trial of its All Access radio service for new users. It’s unclear if Google will run the same promotion with the iPad launch, but since its release, Google Play music has been a strong competitor to Spotify and …uh …Beats.

We pinged a contact at Google who thought it had been released already. It’s possible that this app has already been submitted to Apple and is pending release, but we’ll keep an eye on the App Store and update this article if anything shows up.

Check out the videos and screenshots for a closer look at the alleged Google Play Music app for iPad.

Update: We’ve received another tip stating that changing the app’s “UIDeviceFamily” key from 1 to 2 within its info.plist file will provide the same iPad layout shown below. We’ve independently tested and confirmed this to be true. The app was last updated on March 5, 2014 and it’s possible that this new layout was included with the update. If so, this could indicate that the current iPhone app may be updated to support iPad as well in the near future.