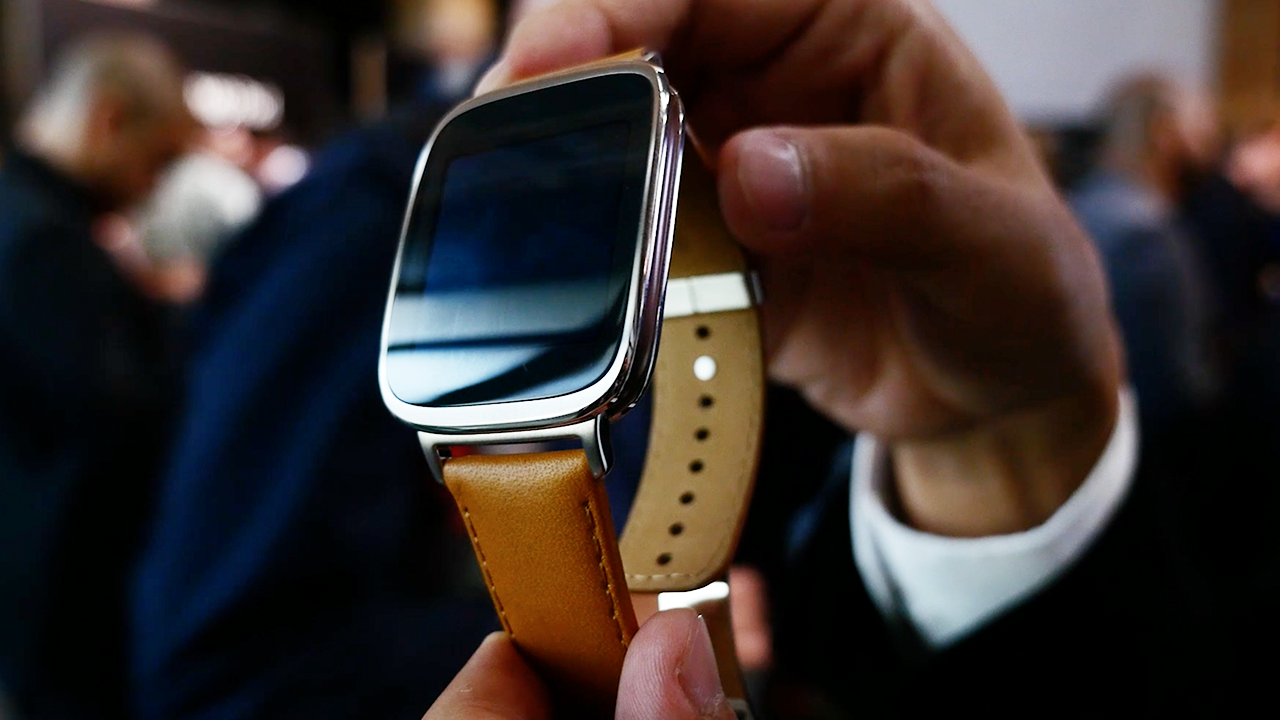 After several teasers over the last couple of weeks, ASUS has officially unveiled its Android Wear-powered ZenWatch. This sleek little smartwatch may be similar to other offerings on the market, but it’s refreshing to see something like this from ASUS…

This is definitely a classy smartwatch. The design screams “premium” and it ships with several software features that aren’t currently found with other Android Wear smartwatches. Of course, the bare-bones specifications are in-line with the Samsung Gear Live and LG’s G Watch, but that doesn’t stop the ZenWatch from rising to the top of my must-have list.

Internally the ASUS ZenWatch is packing a 1.63-inch AMOLED display with a resolution of 320×320, 1.2GHz Snapdragon 400 processor, 512MB RAM, 4GB storage, and fitness tracking features. The watch strap is a standard 22mm size which can easily be swapped out and ASUS plans to bring over 100 different watch faces at launch.

Check out our ZenWatch hands-on video below:

ASUS is also launching an app to work alongside the ZenWatch. The app expands on Android Wear’s basic functionality and allows you to unlock your smartphone or tablet by tapping on the watch face, remotely locate your device, silence incoming calls by placing your hand over the screen, and more. Unfortunately, we were unable to demo these software features during the hands-on time, but they will be ready when the watch ships.

The ZenWatch is similar in thickness to the G Watch, but because of the curved design, it actually feels thinner and is more comfortable on the wrist. It was easy to tell that a lot of attention to detail went into designing this new wearable, and because of that, I think it will bring some tough competition for LG, Motorola, and Samsung.

ASUS has yet to announce an official release date for the ZenWatch, but it will be priced at 199 euros. Hopefully it will also be a sub-$200 smartwatch in the States, but no other pricing information has been given at this time. Overall, this is a solid Android Wear smartwatch and we look forward to checking it out more when it’s released. Read more in the press release below.

In his opening remarks, Mr. Chen covered the company’s evolution from a small motherboard company, founded in 1989, to a leading global technology company 25 years later. Mr. Chen went on to highlight the recent success of the company’s ZenFone smartphone range, which has enjoyed worldwide critical acclaim and consumer recognition in all launch territories to date. “The success of ZenFone reflects our desire to create the most extraordinary phone that can empower everyone,” said Mr. Chen, adding: “It is our great pleasure to announce that the LTE version of ZenFone will be available in Europe during the fourth quarter of this year.”

Derek Yu then took the stage to unveil a full range of innovative new products designed to empower mobile lifestyles, including Zenbook UX305, the world’s thinnest 13.3-inch QHD+ laptop; the chic, compact and colorful EeeBook X205; and MeMO Pad 7 (ME572C), the latest and most stylish addition to the highly-successful MeMO Pad family of Android tablets. Mr. Yu concluded with the announcement of the ProSieben Entertainment Pad, an exclusive 8-inch tablet based on MeMO Pad 8, which is being launched in Germany in partnership with ProSieben* and Intel.

Rounding off the event, Mitch Yang offered an insightful look at the design process responsible for the ASUS ZenWatch, explaining how the final product was inspired by the ASUS user-centric ‘design thinking’ philosophy.

ASUS ZenWatch is the first wearable device from ASUS, powered by Android Wear and featuring a version of the ASUS ZenUI user interface developed specifically for ZenWatch. This exquisitely-crafted and slim device pairs seamlessly with a smartphone running Android™ 4.3 or higher to provide relevant and useful information when it is needed most, and also to serve as a personal wellness manager in conjunction with the ASUS ZenUI Wellness app.

Explaining the design philosophy of the ZenWatch concept, Mitch Yang said “Our design philosophy is Start with People. We want to deliver a seamless digital experience for everyone to enjoy. With our ZenWatch, you will always be connected to everything that matters in your life.”

ZenWatch brings the luxury tradition of fine watchmaking to Android Wear, with an elegant, detail-focused design and use of high-quality materials. It is designed for supreme comfort, with a soft genuine stitched-leather strap and quick-release clasp. The 2.5D curved glass increases usability with a smooth and responsive touch experience. ZenWatch comes with a selection of instantly-changeable software watch faces, allowing users to customize ZenWatch easily to match their style.

ZenWatch is much more than a sophisticated timepiece. With a range of practical smart features, including Watch Unlock, Tap Tap, Remote Camera, Cover to Mute, Find My Phone and Presentation Control, ZenWatch is the perfect smart companion. Its seamless integration with ASUS ZenUI adds even more functionality for owners of ASUS smartphones, letting users enjoy enhanced versions of exclusive ASUS ZenUI apps such as What’s Next and Do It Later.

Thanks to its integrated 9-axis sensor, ZenWatch is also a fully-featured wellness manager. The companion ASUS ZenUI Wellness app lets users monitor and track a range of wellness statistics including steps taken, calories burned, activity duration, heart rate, exercise intensity and relaxation level. Users can set and monitor personal fitness goals with ease, and see their progress at a glance.

ZenWatch raises the bar on what users should expect from wearable devices, showcasing the power of the ASUS ‘design thinking’ philosophy and ushering in a new era of true luxury and sophistication.