Head below for details on how to watch the game from your Android smartphone, tablet, or in your browser on the desktop: 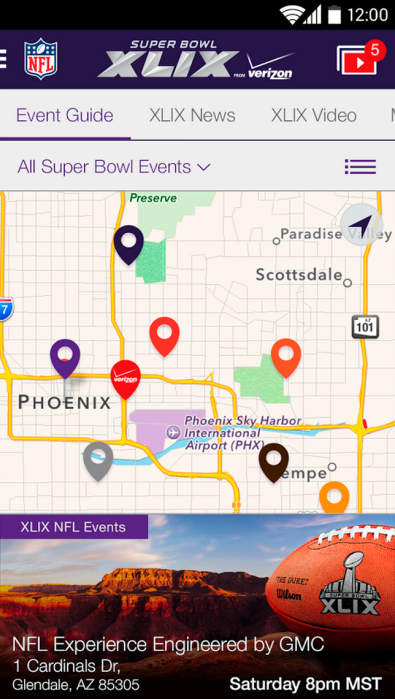 Verizon will have the official stream to smartphones locked down through its NFL Mobile app. The live stream of Super Bowl XLIX and The 2015 Pro Bowl are only available to Verizon customers, which means everyone else will have to find other ways (like Google search or apps offering highlights) to stay up to date on smartphones.

The app will also have a live stream of Media Day player cams and Verizon’s #WhosGonnaWin light show as well as Super Bowl commercials. The app unfortunately doesn’t appear to work for Chromecast streaming to a TV: “Due to rights restrictions, live video playback via HDMI cable and Chromecast is not supported.”

NBC has the official stream for tablets, and it’s opening it to everyone through the NBC Sports Live Extra app.

You’d normally have to login with a cable provider account, but NBC is making the NFL stream available to everyone for its 11-hour “Super Stream Sunday” event this weekend. The coverage starts at noon ET on Sunday and includes pre-game festivities, the game itself and, for the first time, the halftime show.

The stream will be available at NBCSports.com/liveextra on  desktop, as NBC also has the exclusive, official stream of the game for users on the desktop. NFL’s website will also forward users to NBC, so that’s the only official place to grab the game on your Chromebook, Mac, or PC. This will also be the best option for those wishing to Chromecast stream the game to a TV using the Cast browser extension.

Anyone can access the live stream outside of the US through a special $9.99 NFL Game Pass. Other streams options will also be available in Mexico.

Broadcasters will also have rights to stream in various countries—CTV in Canada, for instance—but access through apps will vary. All full list of international broadcasters is here.

As always, YouTube is collecting Super Bowl ads on its AdBlitz channel and the NFL will have the full collection on the website after they air. Verizon’s NFL Mobile app will also have the commercials.

The NFL will have official highlights through its new YouTube channel and Google also announced it will integrate highlights and video clips into search results.

Verizon and the NFL will also have a Super Bowl Stadium app that will include “exclusive in-stadium video content including commercials and replays from four different camera angles.”