Non-functional ‘Google VPN’ spotted in Android 5.1 to ‘protect you on open WiFi networks’ 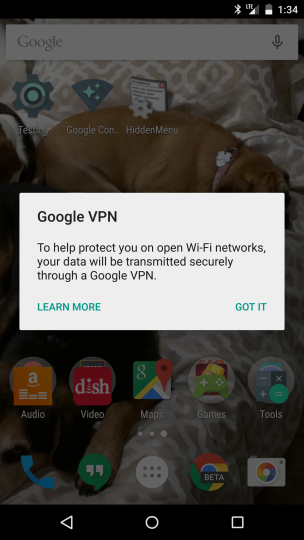 A new app has been discovered in the recently released Android 5.1 update called Google Connectivity Services (via Pocketables), and within—if you do a bit of digging and launch the “WifiAssistantOptInActivity” activity—you can find the above pop-up labeled as “Google VPN”. It looks like the Mountain View company could be preparing to launch its own VPN to increase security when joining an open WiFi network, and this might be the dialogue box that users will be presented with when doing so…

“To help protect you on open Wi-Fi networks, your data will be transmitted securely through a Google VPN,” the pop up says, giving users the ability to either tap “Learn More” or “Got It”. Tapping “Got It” sends you to a page to set up the VPN connection, but that doesn’t seem to be functional in the current build of Android 5.1. Tapping “Learn More”, on the other hand, currently takes you to a generic Google support page: https://support.google.com/mobile/?p=google_settings_VPN.

There are a couple of potential reasons we might be seeing this appear in Android 5.1, but the most notable would be that this might have something to do with the upcoming launch of Google’s MVNO, a service that Google’s Sundar Pichai says will integrate both cellular and WiFi connections (and will first be launching “in the coming weeks” on the Nexus 6). Another big-picture reason could be Google’s ambitions in China, which would be a great place to give Android users more security when connecting to open WiFi. 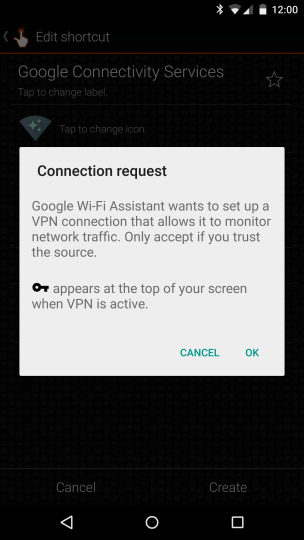 Android 5.1’s official change log doesn’t list many big differences coming with this version and  definitely doesn’t mention the addition of a “Google VPN”. The biggest changes officially noted by Google include support for multiple SIM cards, “Device Protection” (which keeps a device locked until its owner logs in with their Google account), High Definition voice calling, and a host of bug fixes and performance improvements across the board. As you can see with the evidence of Google VPN, though, there are definitely several smaller hidden features to be found.