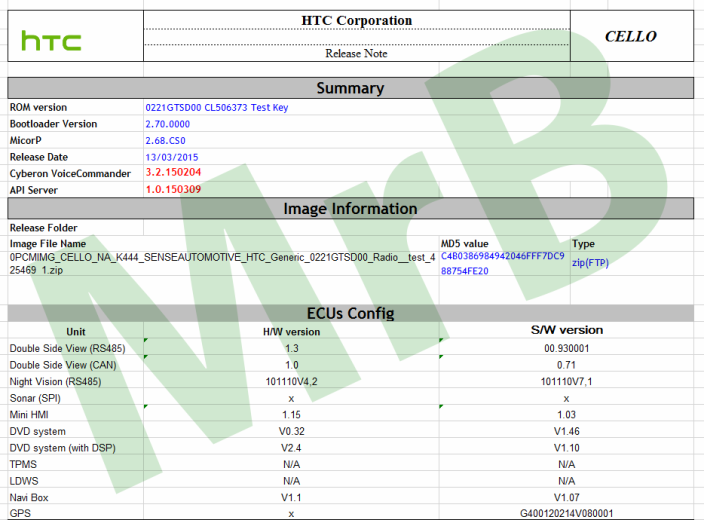 The post claims that HTC Cello has been in testing since the fourth quarter of 2014 and is currently powered by Android 4.4 KitKat. It’s unclear if, when launched, HTC Cello and Sense Automotive will work with purely HTC devices or will also support devices from other Android manufacturers.

HTC is currently testing a device named HTC Cello. From the test logs it is clearly visible that HTC is planning to integrate more with the car than Android Auto does as the device uses CAN bus and RS485 for communication with the vehicle and bluetooth, MHL for communication with an Android device. As of right now the device is tested with the following equipment: Night Vision, Sonar, Mini HMI (Human Machine Interface), DVD, Tyre Pressure Monitoring System, Lane Departure Warning System, Navigation and GPS. Device currently runs on KitKat with Sense version specifically made for cars called Sense Automotive (may be an internal name).

When Google announced Android Auto last year at I/O, it confirmed that OEMs would not be allowed to alter the user interface of the in-car system. This restriction was likely a motivating factor for HTC to bypass Google entirely and develop its own in-car device and operating system. While details remain scarce at this point, we’ll keep an eye out for any more developments regarding HTC Cello and Sense Automotive.