Earlier this month Google released two new Chrome extensions—Color Enhancer and Animation Policy—aimed at making it easier for those with disabilities to interact with the web, and today it’s taking its accessibility efforts much further. The company this morning took the wraps off Impact Challenge: Disabilities, a $20 million grant program from Google.org, the charitable arm of Google tasked with supporting nonprofits changing the world for the better through the donation of grants, technology, and the knowledge of Googlers looking to give back.

The program’s mission, according to Google.org director Jacquelline Fuller, is identifying new areas of opportunity where the use of emerging technologies can increase mobility and independence for people living with disabilities. In a blog post announcing the initiative she shared the anecdote of Google program manager Laura Palmaro who herself became legally blind just as she entered her first year of high school.

At an age when most teenagers are wrestling to gain as much independence as they possibly can, Palmaro was forced to become even more dependent of others to read everything aloud to her. She ended up adopting screen-readers and magnification software to assist her and reduce reliance on others, though, and now channels those early frustrations into helping the Chrome and Chrome OS teams make their products more accessible. “Assistive technology can tear down boundaries, and empower people to find their independence and fulfill their dreams,” Palmaro said in the post.

Along with announcing the program and calling for nonprofits to submit theirs ideas for consideration to receive funding, Google.org shared two organizations they’ve already supported through the initiative. The first is the Enable Community Foundation, which connects people who want prosthetics to individuals who will design, print, assemble, and fit them absolutely free. Prosthetic legs, for example, can traditionally run $5-50k in cost and as a result be out of the reach for many. Google.org awarded them $600k to “advance the design, distribution and delivery of open-source 3D-printed upper-limb prosthetics.” The second organization is World Wide Hearing, which is developing a low-cost kit for hearing loss testing that could be widely available and affordable in the developing world, to which they granted $500k.

On the official site for Impact Challenge: Disabilities, Google shares some facts that put the size and scope of the problem into perspective. Most importantly? The amount of people in the world with disabilities is one billion, or one in seven. And many of the world’s inventions aren’t designed with these individuals in mind, like basic utensils, for which Google created Liftware to better stabilize utensils for those with hand tremors. 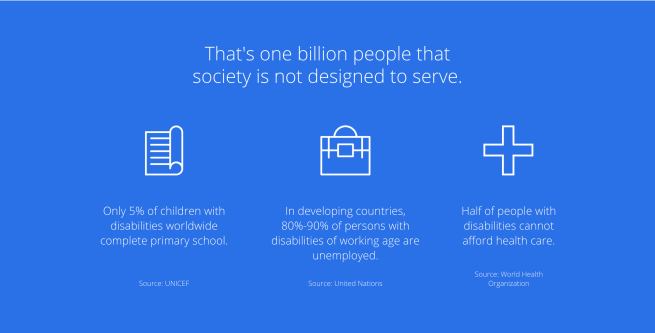 Google ends the post by saying that the company is “committed to monitoring the accessibility of Google tools; and we provide engineering teams with training to incorporate accessibility principles into products and services.” Google believes that groups like Enable and World Wide Hearing are proof that technologies designed to help people living with disabilities don’t have to be bulky, expensive, and limited to assisting with one or two specific tasks. And if your organization can expand opportunity for the billion struggling with disabilities, it wants to fund you.