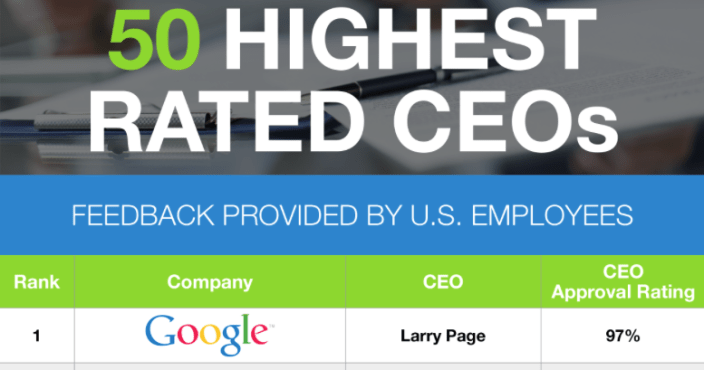 Career website Glassdoor today has released its annual breakdown of the top 50 CEOs, as voted on by employees. This year, Google CEO Larry Page was voted as the chief executive officer of the year with a 97 percent employee approval rating. Last year, Page was 10th on the list, with LinkedIn CEO Jeff Weiner taking the top spot. Weiner this year fell to 12th overall with an approval rating of 93 percent.

Page’s placement as the best and most liked CEO comes as no surprise when you consider that Google was recently voted the best company for which to work for the fourth year in a row.

Of the top 50 CEOs, tech executives accounted for 15 spots. Last year, however, 20 tech CEOs were on the list. Of the top 10, four spots are occupied by tech CEOs this year. The full list of tech CEOs (via VentureBeat) can be seen below: