Chromium contributors developing a ‘Sidebar API,’ could be used to resurrect Side Tabs feature 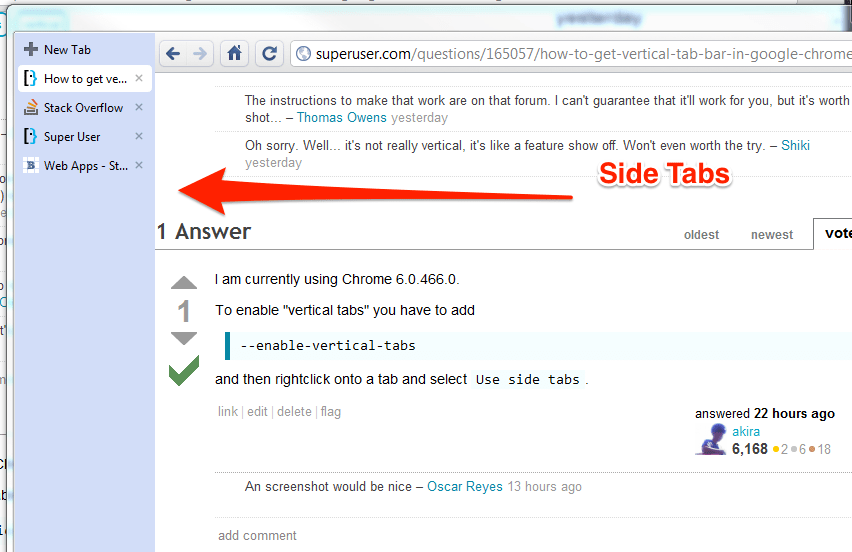 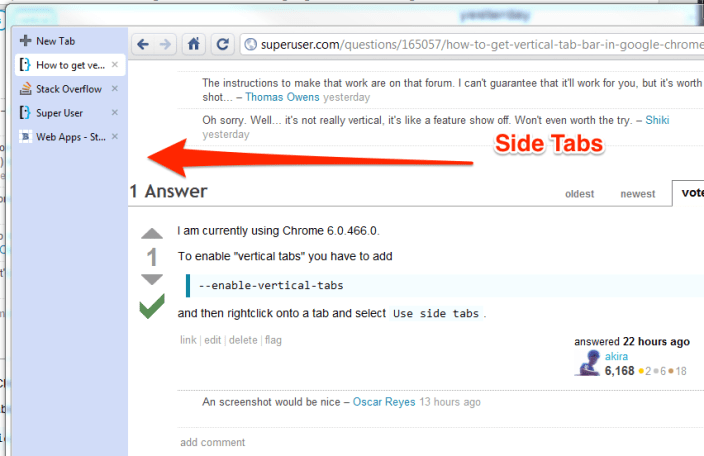 Longtime users of Google Chrome may remember a period when it was possible to display tabs vertically, in a bar on the left-hand side of the screen, rather than at the top above the address bar. That feature (pictured above) was experimental, and the Chromium team, which creates public forks of the source code behind Google’s commercial browser, eventually gave up on the idea because it was believed to be a niche feature and “nobody stepped forward to do the work to drive the feature to completion.” Sidebars may be coming back from the dead in a different but similar form, however…

In the Chromium issues tracker, where bugs, changes, and feature suggestions are put forward for contributors to respond to and act upon if deemed worthy, several contributors, including an ex-Googler, have recently announced that they’ve begun developing a “Sidebar API”. This would allow developers to display a sidebar are containing static or dynamic content upon the user clicking a toolbar button (the extension buttons that appear to the right of the address bar). As of now, developers can only display popups like this:

The developer API is still in its early days, with the proposal being posted just back in April. Much could change between now and when the feature reaches the canary or development release channels — if it reaches a release channel at all without getting killed first.

The way the API is being proposed right now, however, would have it functioning pretty similar to Chrome extension popups. Only one sidebar could be displayed at a time, while a sidebar is opened its associated toolbar button would stay depressed (like pictured above), and the sidebar would shrink or grow based on the size of the content within it, with some predetermined maximum width.

Developers of Firefox extensions have been able to build sidebars before Chrome even existed, and many users complained when Chrome launched without them. Using sidebars, not only could the defunct Side Tabs feature be resurrected, but so could many other web applications that a user may go back and forth between. Messaging clients like Skype, web music streaming services like SoundCloud or Spotify, and a whole host more are examples of services that could benefit from an API allowing for the use of sidebars.

Just like how any modern OS allows you to place to applications side-by-side on the screen with windowing, sidebars would make web applications feel even more like native applications. We all know that’s what Google wants, too, with recent changes to Chromium and Chrome OS like the ability to run Android applications, and making it easier on Android to pin frequently visited web applications to the home screen.

If this is something you’d like to see, or have some suggestions on the APIs implementation, definitely head over to its posting on the Chromium issue tracker.