Want your Gmail messages to self-destruct? There’s a Chrome extension for that… 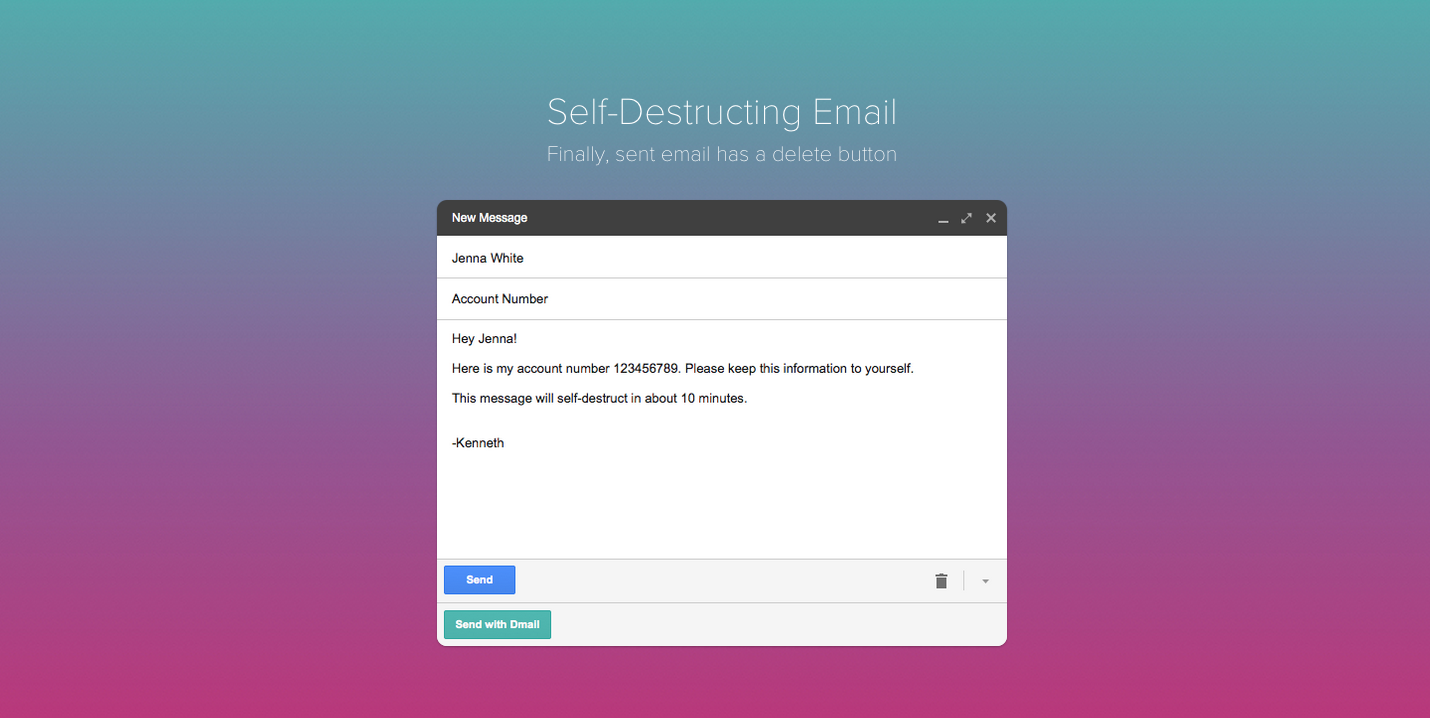 Dmail is a Chrome extension which allows you to un-send, or revoke any emails you send through your Gmail account. The service was launched by the same brainiacs that brought us the Delicious social bookmarking tool.

Self-destructing email isn’t exactly a new thing. Google itself rolled out a feature that lets you un-send a message once you’ve sent it. The only issue with Google’s built-in service however, is that you only have 30 seconds to change your mind about sending an email to someone. Dmail lets you revoke emails whenever you like. I took it for a quick spin to see what it’s like, and I have to say, it’s an incredibly convenient way to make all your outgoing communication more secure. It also happens to be ridiculously easy to use.

The first step is heading over to the Chrome web store and installing the extension on your Chrome browser. Once installed, go to your Gmail inbox on the web and start composing a new message. Any new email you send will have the option to switch Dmail on or off. A new Dmail toolbar appears just above the regular one at the bottom of the ‘compose’ window. There’s an on/off toggle switch, and presets for how long you want the message to be available for.

You can choose to have the email self-destruct within an hour, a day or a week or choose ‘never’ if you don’t want to set a pre-determined time frame. If you need to revoke it sooner, or at a later date, you can go to your ‘sent’ folder in Gmail at any time and revoke any messages you’ve sent using Dmail.

If you happen to send your email to someone who also has Dmail installed, messages show up just as normal in their Gmail inbox on the web. But what’s particularly great is that you don’t need the recipient to have Dmail installed in order for it to work. Send an email to a friend or colleague with Outlook, iCloud or any other email — or someone who uses a third party email client/app — and they’ll see a message in their inbox like the one below.

They can see it’s clearly from you, and the subject line appears as normal. Because the email shows up in their inbox as being from you, they can just reply to it as normal and it’ll show as part of any email conversation thread the two of you have going. If they’re concerned that it’s a little ‘phishy’ looking, they can always text/call you to double check. Assuming they’re not at all suspicious, they click the ‘view message’ link and it opens a web page with the email displayed like this:

Let’s say you then decide sending the email was a bad idea, or you have confirmation the recipient has read it and you want to destroy it, you click the ‘revoke’ option in your ‘sent’ box as shown earlier. Now if the recipient wants to read it, they can’t. Clicking on the ‘view message’ link just leads them here:

The service uses 256-bit encryption and the only people able to read any messages are the sender and the recipient. Gmail can’t read the messages, and neither can Dmail. Although they get an encrypted version of the message, neither has the decryption key to make it understandable.

Dmail will expand to have even more features eventually. The company has plans to make it a freemium service, with enterprises and business paying for extra features while regulars like us get it as it is for free. What’s more, it’s going to be an iOS app in August and will hit Android as a native app a little while afterwards, so you’ll be able to send Dmail-encrypted emails right from your smartphone.

As of right now, it’s a little restricted. You can only send Dmail encrypted emails if you have a standard Gmail account, and use the web service in Chrome. Google Apps accounts aren’t compatible yet, and neither are other email providers. Although you can receive Dmail messages from any email account or client, you can only send them through Gmail on Chrome.

You can read up more about Dmail at Mail.Delicious.com.