Are you one of the many diehard SoundCloud users and wish you could easily stream those tunes to your TV? You’re in luck, as the public version of SoundCloud in Google Play has just received an update with support for Google Cast, letting you stream all of the best remixes and indie tracks straight to your living room entertainment set up. 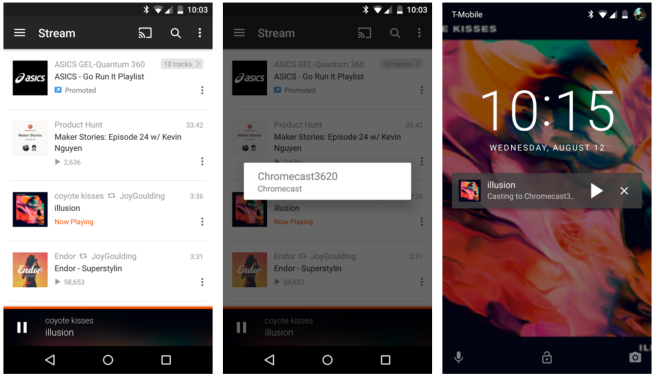 Cast is Google’s software development kit which developers can use to create second-screen video experiences for Chromecast and Android TV or to easily beam audio to Cast-enabled speakers. Since SoundCloud is an audio service after all, the experience for Chromecast is (unsurprisingly) pretty bare-bones. You can see information on the track currently playing — but that’s about it. But for those who have TVs and speaker systems that are better than their tinny laptop speakers, this will surely be a popular addition.

Just searching Google for mentions of SoundCloud and Chromecast shows many blog posts with workarounds to getting SoundCloud working on Cast devices, including third-party apps that can pull a users’ content from SoundCloud and that have the necessary Cast support. Now those are no longer needed.

With this update, we bring you performance improvements and bug fixes. We’ve also integrated with Google Cast, which will allow you to stream SoundCloud to your Chromecast and other Cast-enabled devices, like Android TV and speakers.

Head over to the Play Store and install the app for free.