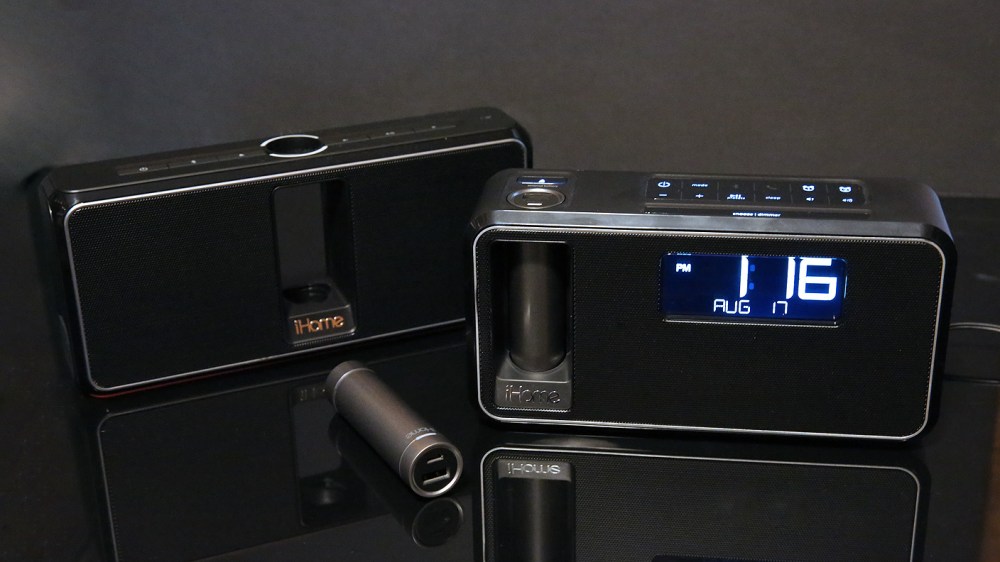 iHome has spent years building a reputation for thoughtfully designed, value-packed speakers and headphones. It was one of the first companies to recognize the value of accessories tailor-made to digital music players, and has been selling Android-compatible audio gear for years. Moreover, whenever iHome innovates, it always comes up with something cool.

Kineta K1 ($150) and Kineta K2 ($100) are iHome’s latest innovations: Bluetooth speakers with beautiful built-in battery charging docks and detachable USB battery packs. K2 is a nightstand- or desktop-friendly alarm clock radio with a large screen, stereo speakers, and speakerphone support. K1 is a completely portable stereo speaker with 13 hours of play time and a speakerphone. Each comes with iHome’s new K-CELL, a tube-shaped 2,600mAh battery that locks in place until you’re ready to go, then easily hides in your pocket or bag to refuel your phone, tablet, or watch anywhere.

Both Kinetas efficiently address two simple facts: Android devices sound better through speakers and need extra power on-the-go. Read on for details on how they each combine two useful accessories into a single great package; you’ll also find a special discount inside!… 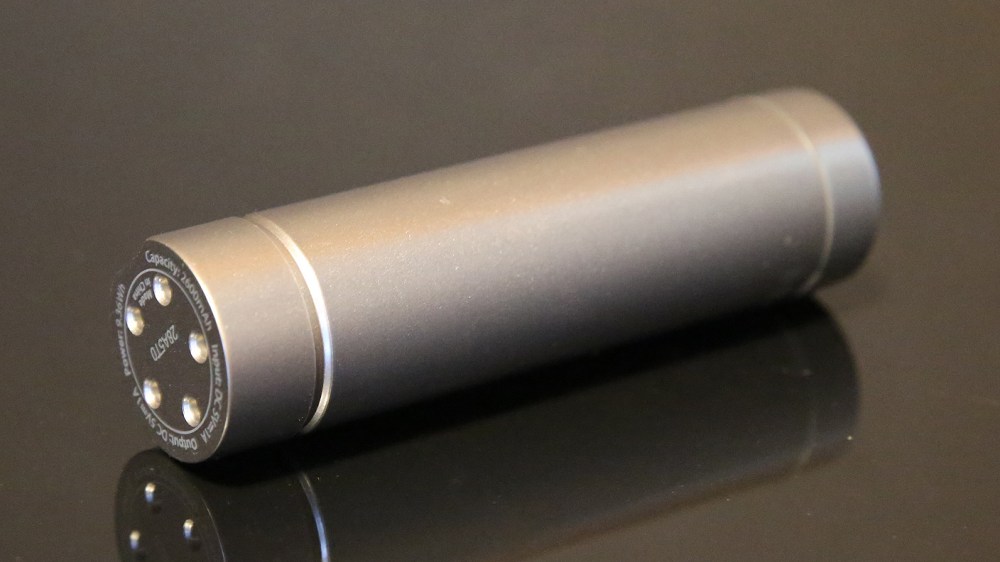 The key to both Kinetas is iHome’s new K-CELL, a compact rechargeable battery tube that can be easily carried around during the day, and recharged inside a Kineta at night. You get one K-CELL with each Kineta speaker, and can buy spares for $29 a piece. For now, the K-CELL is offered in a gunmetal color, but silver, red, black, and gold versions are planned. Although it looks like a tube, it has a grippy guide notch on the back, and both USB and micro-USB ports on the top for charging. Five dots on the bottom enable it to recharge in any Kineta speaker, while the micro-USB port lets you recharge it when the speaker’s not around.

K-CELL’s 2,600mAh capacity is perfectly suited to phones — it has enough power to deliver 50-100% extra run time, depending on your phone. A single K-CELL can extend an Android Gear watch run time by days, while tablets will get at least a few extra hours. iHome bundles each Kineta with a USB-to-Micro-USB cable that can be used with virtually all your devices and accessories. 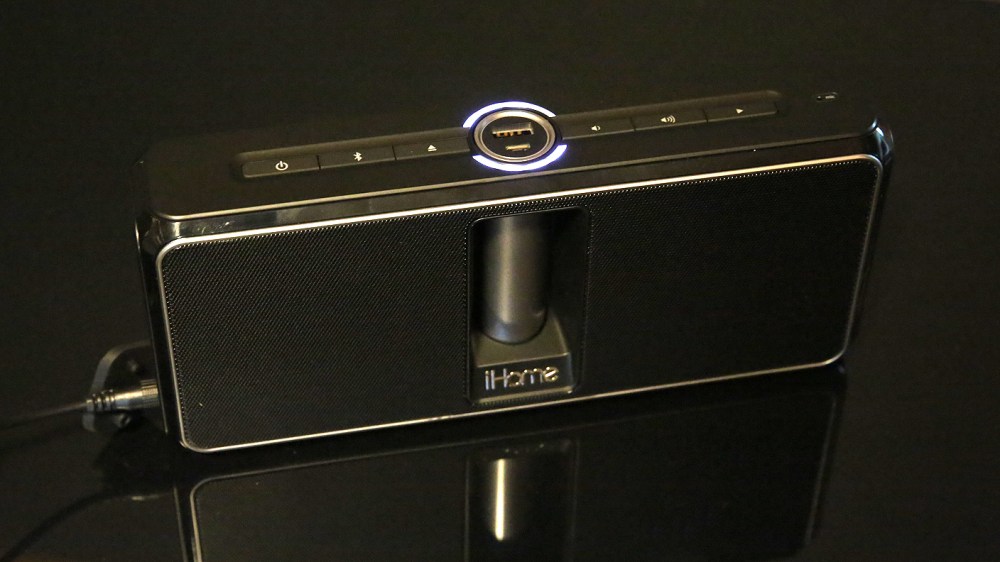 The majority of Kineta K1 is the type of portable speaker system we’ve come to expect from iHome: a solidly built, attractive-looking box with streamlined controls and just a little bit of flash. Glossy and matte black plastics are accented by gunmetal edging on the front, and a red rubber pad on the bottom. If it wasn’t for the central core — an iHome-branded platform with a tube in the center — K1 would be a lot like other speakers. 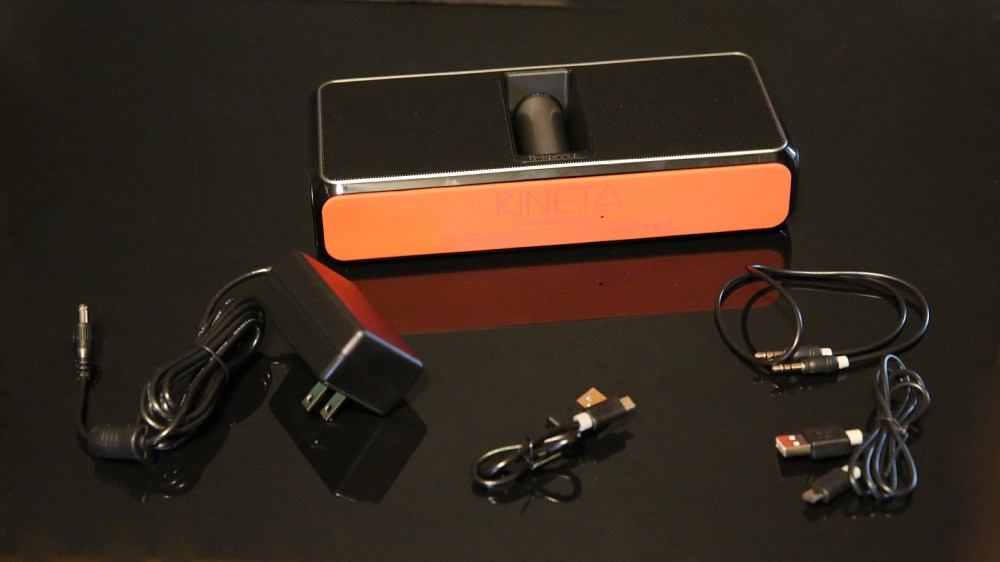 But the K-CELL core makes K1 special. iHome rings it on top with a set of eight bright white lights that indicate the K-CELL’s power and K1’s power, each in four stages. K-CELL nestles inside K1 with a satisfying click, and only pops out if you press an eject button on the top. When it’s inside K1, it feels fully integrated, and can extend the speaker’s portable battery life by 7 hours — or get popped out to recharge another device. Both K1 and the K-CELL can be recharged simultaneously with the included wall adapter, which plugs into a rubber-capped port on K1’s left side. 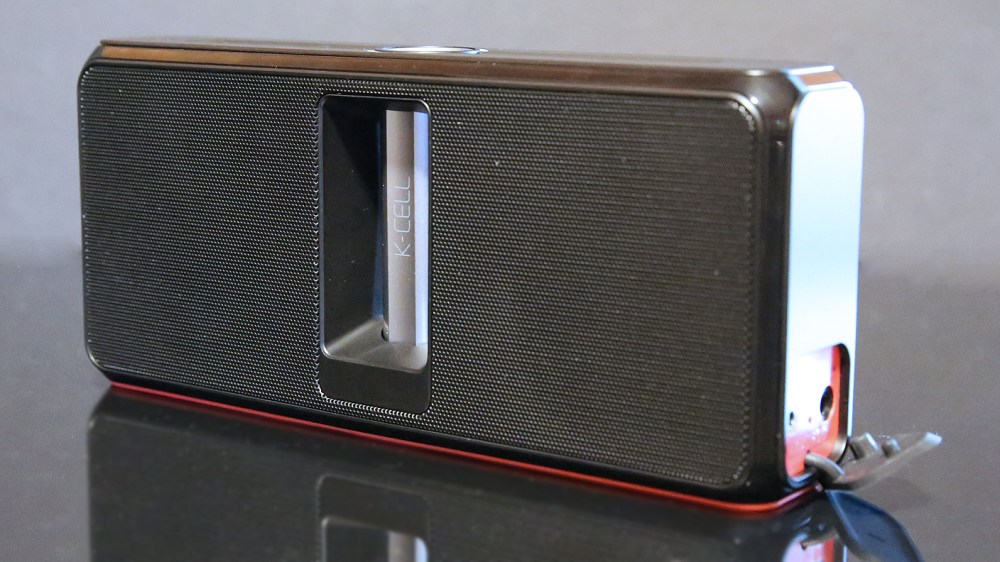 Kineta K1 also packs a lot of audio horsepower. In person, you can just barely see two huge 2.5″ audio drivers hiding behind the black perforated grille, and a microphone is on the top right corner. They enable K1 to perform powerful, rich sound that easily eclipses what your phone or tablet can do on its own, and an integrated speakerphone lets you make calls that are louder and clearer than a cellular or Skype connection. 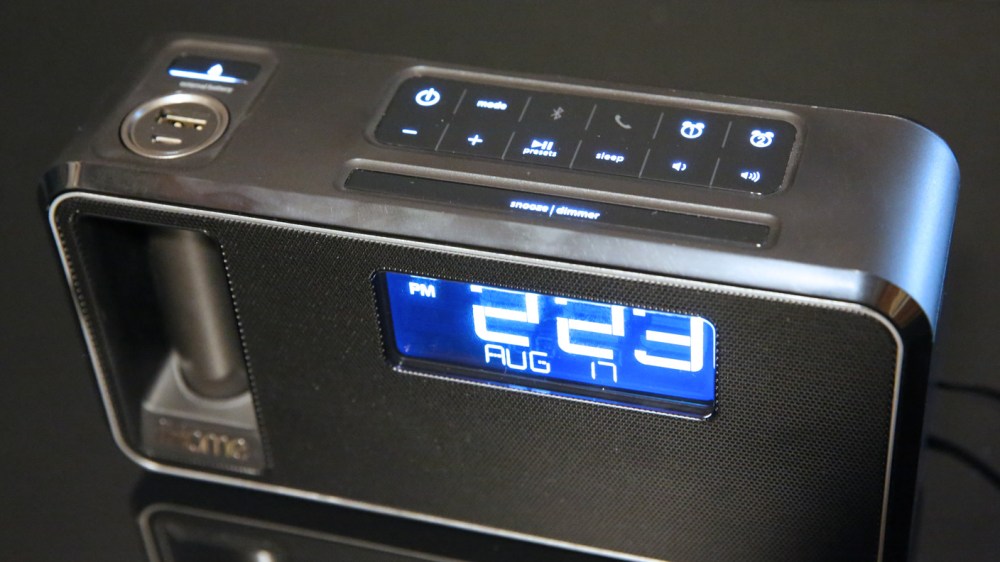 iHome’s storied history as a maker of alarm clock radios means that the $100 Kineta K2 feels like an inevitable (and welcome) extension of K1. The design is highly similar, except that the K-CELL battery core has been moved to the left, and a large clock face has been positioned in the middle of the stereo speaker grille below an array of 13 touch-sensitive control buttons. 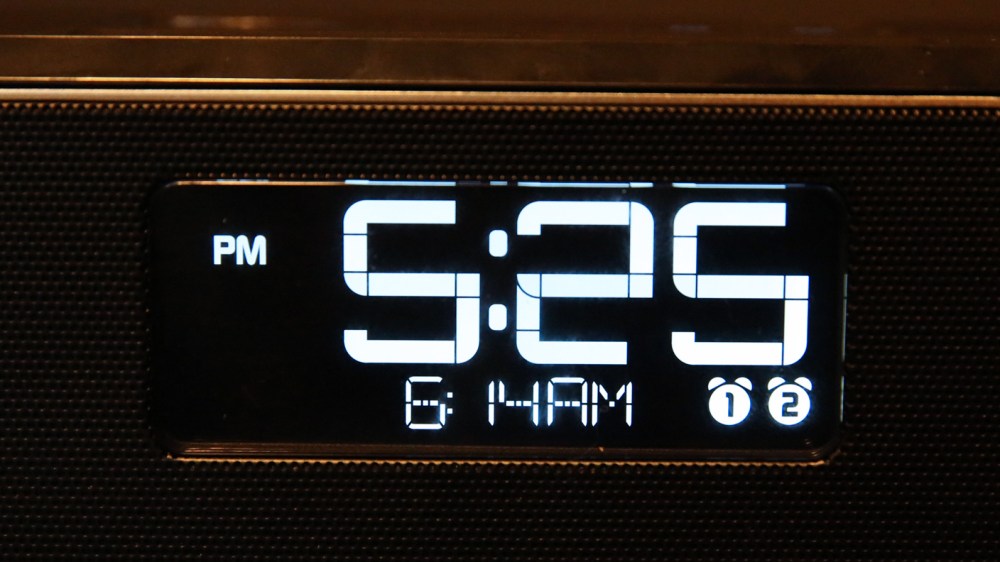 iHome is known for excellent clocks, and this one’s a chip off the old block: eight levels of brightness for light-sensitive sleepers, twin built-in alarm clocks with independent volume levels and audio sources, and if no alarms are active, the current calendar date — all highly legible. iHome’s alarm clocks are consistently well executed and large, which makes them much better than squinting at the screen of your phone, tablet, or watch at night. 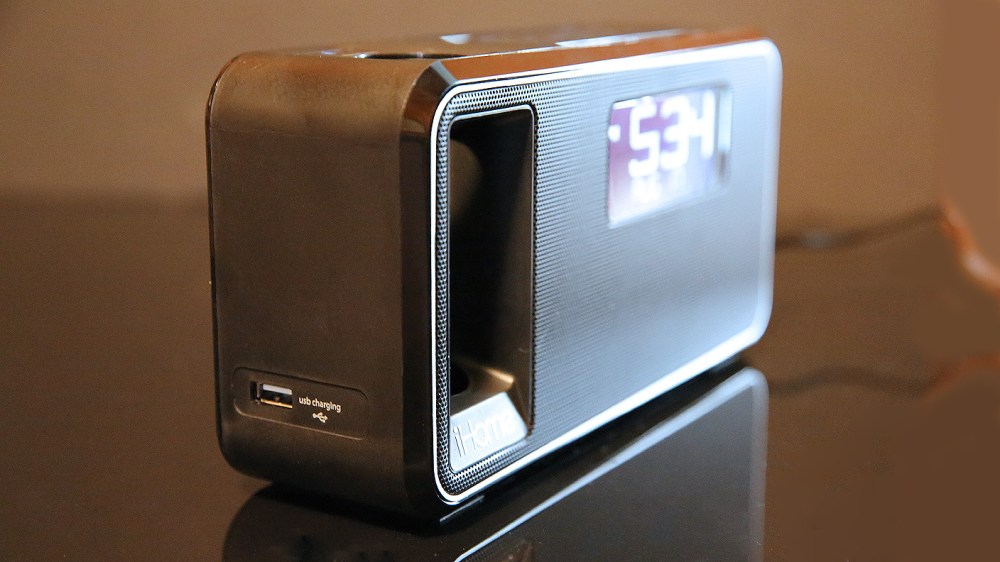 Pairing the clock with an FM radio, Bluetooth speaker/speakerphone modes, and the K-CELL detachable battery is a killer combination of features, but there’s another benefit: a side-mounted USB charging port. This makes K2 a highly practical all-in-one audio, time-telling, and dual recharging station for both your favorite device and a spare battery. As with K1, a micro-USB cable is ready to be used with your phone, tablet, or common accessories such as Bluetooth headphones. 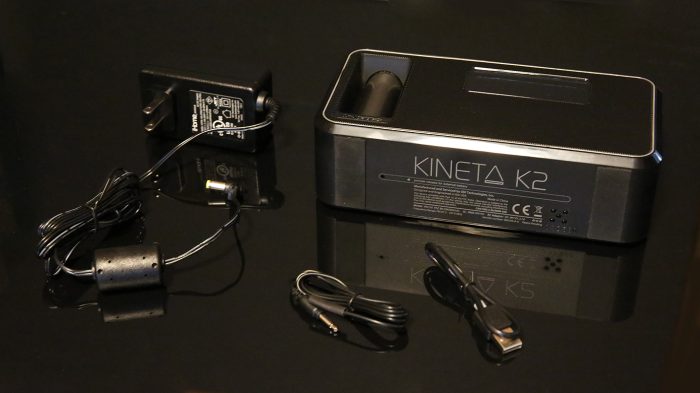 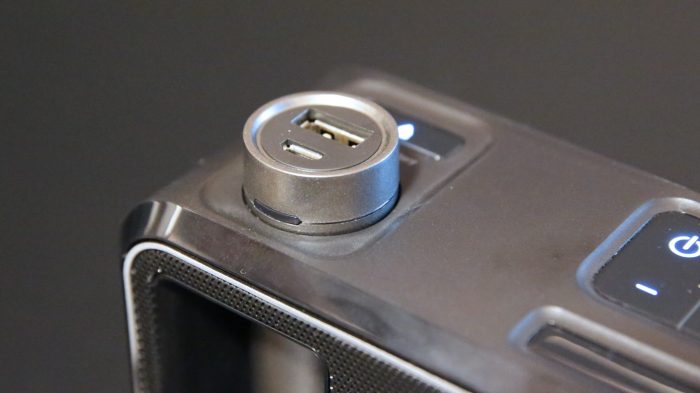 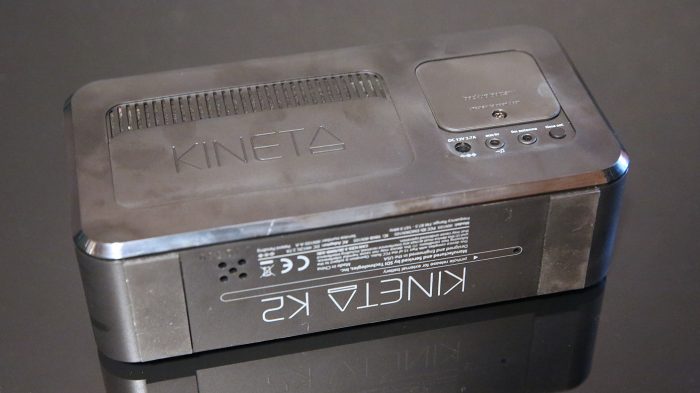 K2’s sonic performance is similar to K1’s, but with little differences. The speakers are smaller and closer together, but since K2 is thicker, it has a bit of added bass resonance that helps music sound even richer. By $100 clock radio standards, K2 sounds really good, particularly when you consider how nicely the clock, battery, and charging features work together. This is a desktop clock that anyone would be happy to put on display and actively use every day.

Purchase A Kineta Directly From iHome

Just introduced, Kineta K1 and Kineta K2 are great values for their $150 and $100 prices, and can be ordered with free shipping directly through iHome’s web site, iHomeAudio.com. For a limited time, you can get the Kineta K1 for 10% off, plus a spare 2,600mAh K-CELL battery pack for free if you use code KCELL when ordering through iHome’s web site. That’s an awesome deal. Regardless of the version you choose, you’ll be impressed by the solid build quality, audio performance, and battery convenience you get for the dollar!

This post has been sponsored by iHome, maker of Kineta, SoundFlask, and other great audio accessories for Android devices.