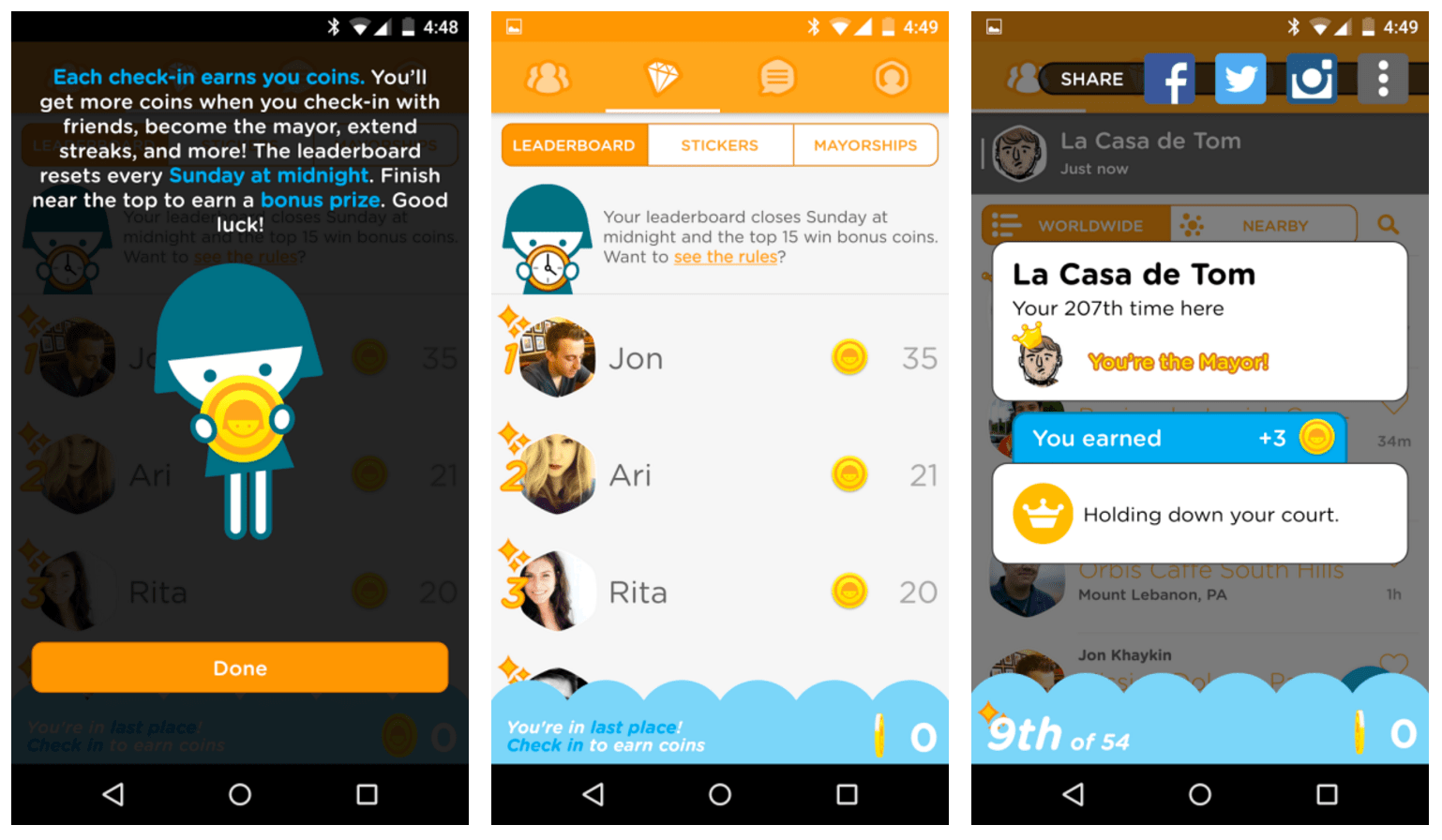 Location check-in app Swarm continues to become a bit more like the Foursquare app of yesteryear, this time gaining a leaderboard system identical to the original one that helped to make Foursquare so addictive in the first place.

Swarm saw leaderboards re-added to the app almost a year ago now. Those, however, were different from the original leaderboards in that with the new ones, each category (i.e. coffee shops, bars) had its own separate leaderboard. Today’s update, meanwhile, brings back more general leaderboards that rank users based on how many “coins” they’ve earned from all of their recent check-ins. The leaderboards reset every week (Sunday at midnight) so someone who has just joined Swarm still has a chance to climb the ranks amongst their friends.

The only catch is that not all places are equal, with the amount of coins earned from a check-in varying by place and circumstance. Checking in at my house (yes, I added my house as a location), for example, earned me 3 coins while checking in at Starbucks earned me 13, and extra coins can be earned for streaks (checking in somewhere multiple days in a row), checking in somewhere you’re a mayor, and checking in at odd places. Beyond coins earned from check-ins, being ranked in the top 15 amongst your friends at the end of the week earns you coins to start the new week ahead of the pack.

In its blog post on the update, Foursquare hints that coins will have more value in the future (any ideas?), but doesn’t provide more detail. Aside from the new leaderboards, there have been some more minor changes as well. The “Here Now” feature in Swarm for seeing other users who are also checked in at the same place as you is also more prominently displayed now. There’s also been some consolidation, with messages and notifications combined into one inbox, and the views which show check-ins of nearby friends and a list of all your friends’ check-ins worldwide have been combined into one “Friends” tab.

Swarm, for the uninitiated, is a sister app to Foursquare, now a local recommendations and discovery app like Yelp. The two were once one and the same, though, until in 2014 Foursquare decided to split the core recommendations and check-in features into standalone products. It made sense at the time, as most active users of Foursquare used the app for one feature or the other but not both, and check-ins being there made some feel like they had to check-in to get personalization recommendations, which isn’t the case.

Along with the Foursquare branding, which was given to the recommendation and discovery product, the check-in portion when relaunched under the Swarm name also lost its competitive features like the aforementioned leaderboards that encouraged users to check-in to places often. In the early days, these features made checking in fun, which served a two-fold purpose of keeping users coming back but also helping Foursquare to build the location database which now powers its recommendations. Much backlash led the company to slowly reintroducing those features in the new app, however, albeit in slightly different reincarnations, and now reintroducing them almost 100% exactly as they were in the old days.

The update is live in Google Play now.