McDonald’s has been circulating an update to its staff relating to changes in its mobile payment offerings. If the details being sent internally to employees are accurate, Android Pay could be available to customers from August 26th (two days away). Android Pay, of course, was one of the big announcements made at Google’s I/O conference last month and was unveiled alongside Android M, which we now know is 6.0 Marshmallow.

There are reasons to be skeptical about this date. Mostly, the two communications shown by Android Police state that McDonald’s is rolling out Samsung Pay support on August 21st (last Friday). That date, we know, is incorrect. Friday may have been the release date for the Galaxy Note 5 and Galaxy S6 Edge+, but Samsung’s mobile payment solution isn’t expected until next month. This could simply be an honest mistake. If so, it seems strange that we’ve heard nothing about McDonald’s higher-ups not informing staff of its error. Another explanation is possibly that the company is rolling out support way ahead of launch to make sure they’re ready. After all, they have some 14,000 stores in the U.S. alone. 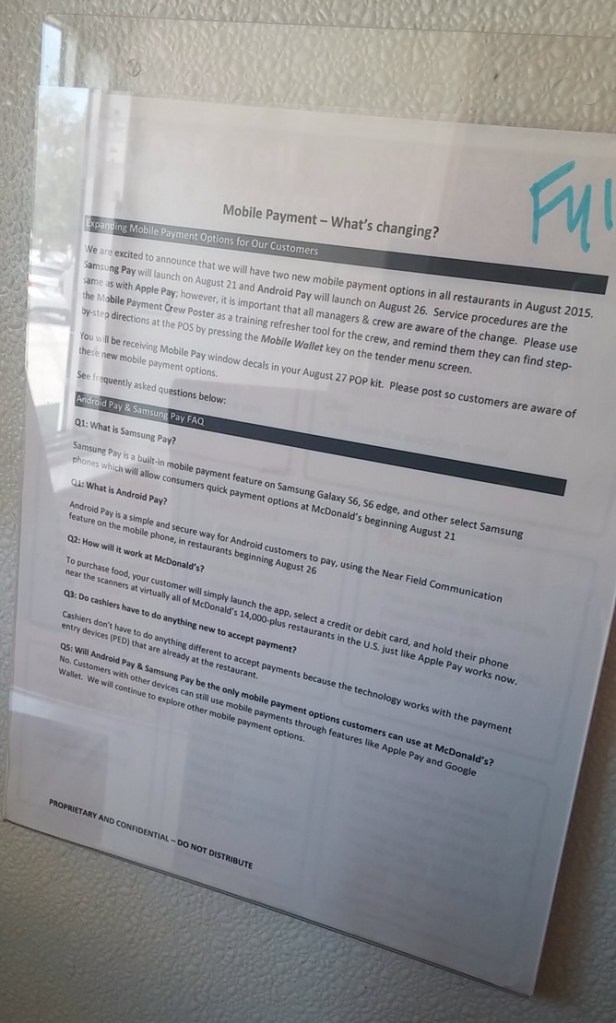 There is a chance that the Android Pay launch date is accurate even if the Samsung Pay one isn’t. If it is accurate it would come as something of a surprise. We’d initially expected that Android Pay would be publicly available around the same time as Android 6.0 Marshmallow to tie the two launches together. In fact, Google stated as much when it was announced. Saying that, it was also announced that Android versions from KitKat and later would support it, suggesting that it would at least be possible to launch Pay before Marshmallow, even if it isn’t probable.

If I had to guess, I’d say McDonald’s got its dates wrong by about one month. Still, I’ll be delighted if Android Pay does launch this week.