Sony Xperia Z5, Premium and Compact get a healthy price cut before they’ve even launched

The Sony Xperia Z5, Z5 Premium and Z5 Compact have all had price cuts before they’ve even hit the market. Prices were revealed just a few days ago, and Sony has already seen fit to adjust the price points.  Perhaps in response to the sense of disbelief at how expensive they would be… 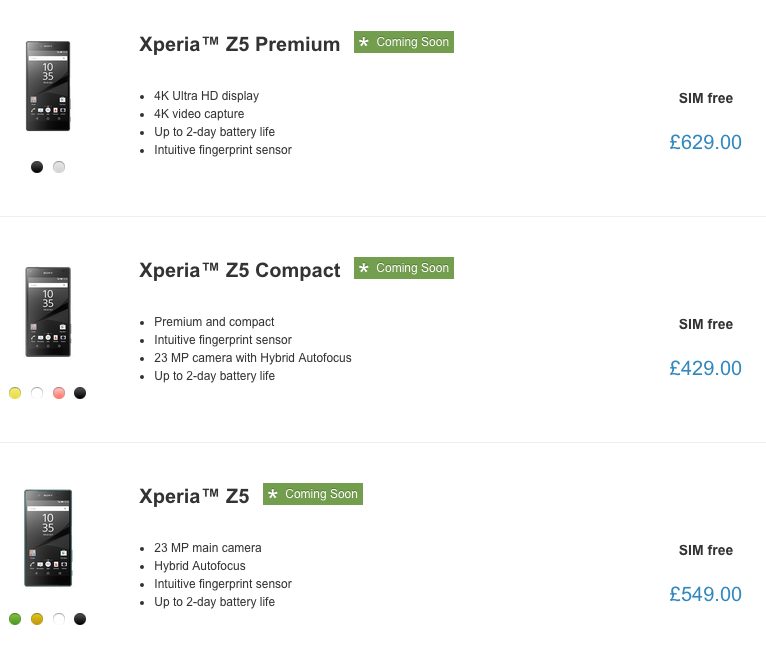 Sony unveiled its latest and greatest Xperia Z family of smartphones at a pre-IFA press event in Berlin last week. The Xperia Z5 family includes three phones: The smaller Z5 Compact, the ‘regular’ Z5 and the Z5 Premium with its insane 4K resolution display. Apart from size and screen resolution differences, all three phones boast virtually the same specifications. Each phone in the Xperia Z5 trinity has a 23MP camera with hybrid auto-focus on the back, boasts 2 day battery life and has a redesigned power button with built-in fingerprint sensor on the side. All three have a Snapdragon 810 processor, 32GB internal storage and IP65/IP68 water and dust resistance. They all ship with Android 5.1 Lollipop and are expandable up to 200GB via MicroSD. Both the larger devices have 3GB RAM, while the Compact has 2GB.

Although we’re not sure on which carriers or retailers will sell the device in the US, the Xperia Z5 will be available to buy in the UK and other markets fairly soon. A precise release date hasn’t been given yet. Whenever it lands on store shelves, at least we know now that they’re far more affordable than they were before, particularly the Z5 Compact which will perhaps take the crown as the best (only), small flagship on the Android market.