And what’s worse is that the other numbers across the board haven’t really improved all the much since last month, either. Last month, 23.5% of Android users were running last year’s OS, Lollipop, and now 25.6% have managed to go to a build of either 5.0 or 5.1. An amazing 37.8% of Android users are still on KitKat… 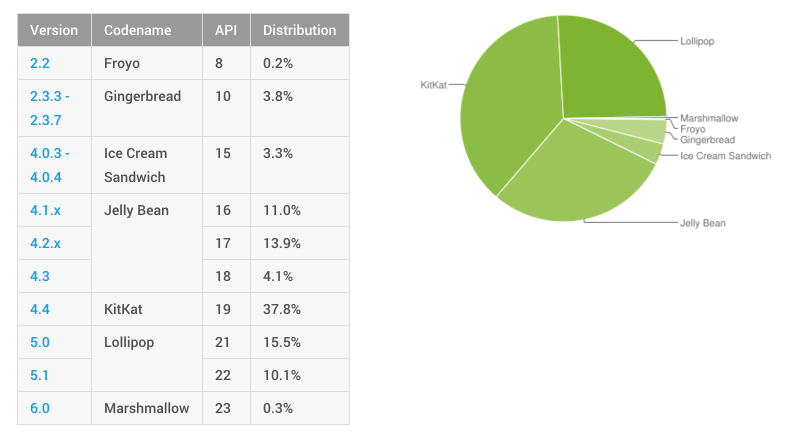 Looking at even earlier versions of Google’s mobile OS, it’s really sad to see that as much as 36.3% of the Android ecosystem are still running a version older than 4.4 KitKat. And let me reiterate, reader, that version 6.0 has been “out” (albeit just for Nexus devices) for a month now. This compares to iOS 9, which just hit 66% adoption just a month and a half after its release.

I know the comparison to iOS is growing tired, but this is probably one of the most blatant examples of an area that Google and its OEMs are just so far behind. This has implications beyond just users having the latest features. Developers are developing for a much more fragmented ecosystem on Android (another statement I know is growing old), and fewer phones have the latest security updates. These are real problems for developers and users alike.

With Android Lollipop just passing 25.6% after an entire year, I don’t see the rest of 2015 (and going into next year) faring any better, despite the efforts of hardware manufacturers to renew their commitment to updates.