Opinion: Besides tablet improvements, where is Google going with Android N?

One of the reasons why I initially fell in love with Android was Google’s ability — often showcased on an annual basis in May or June at I/O — to always push technology forward, reinvent itself, and even dare to go a little overboard before making sure that everything was under control.

Most notably, since the end of 2011, Ice Cream Sandwich started to look as a more mature OS, one whose direction was beginning to make sense, appear clearer, as Android itself was soaring, soon to be the most adopted mobile operating system on the planet. What we know as “Holo”, a good-looking visual style for the system, was introduced, and coupled with bleeding-edge devices such as the Galaxy Nexus it made for a pretty sweet package.

But now, 5 years after the Galaxy Nexus was released and with Lollipop’s new design under its belt, where is Google going next?

Up until KitKat and the Nexus 5 in late 2013, Android was both being pressured by an ever-growing presence of the iPhone and iOS 7’s stunning modern facelift, putting even more under the spotlight the OS’ main problem: consistency.

Talking about “Android” as a single entity was a very hard task by itself, as a myriad of devices and versions of the system – without taking the single OEMs’ customisations into account – were out there, and making sense of all that mess was increasingly hard. Google itself, while clearly demonstrating a spiked interest in design, was still too inconsistent in its concrete output, with apps waving from Holo Dark to Holo Light, from gradients to white cards, from navigation systems to hamburger menus, and so on and so forth.

At I/O 2014, however, Google tried to pull off what was arguably their biggest design effort to date, overhauling not just Android but, as Design VP Matias Duarte himself said, “the whole of Google”. 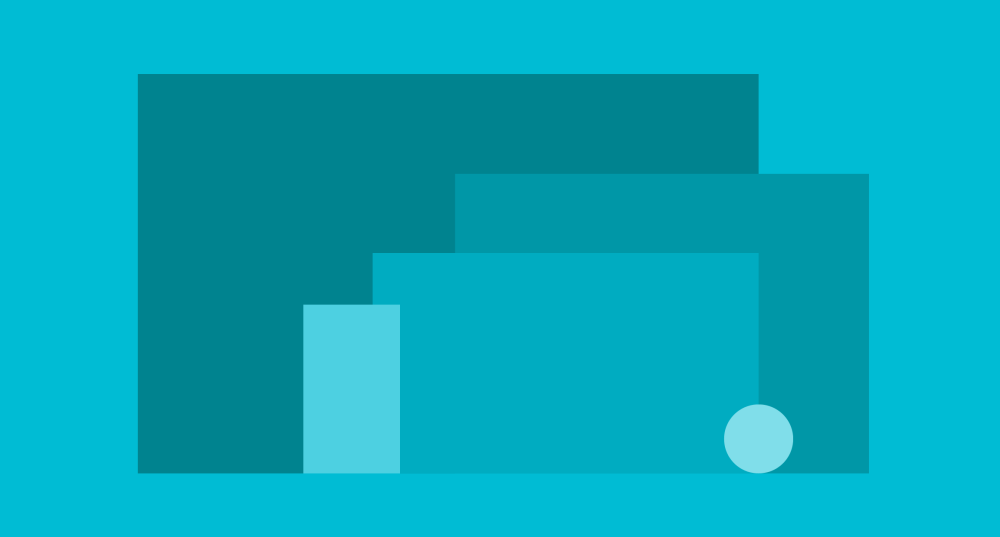 It was indeed a massive work. The newly introduced Material Design was not just an aesthetics’ facelift for the company, but rather an entirely new way of thinking about software and the ever-so-digitalized world around us in terms of visuals, and trying to answer more fundamental, almost philosophical questions such as “what are pixels made of?”. It is something that in the company’s mind is set to pave the way for how Google – and, by extension, the web, at least in part – will operate throughout the next ten, even fifteen years, but whose repercussions had to be tangible immediately.

The best way to showcase their renewed design commitment, in fact, took form within Android, whose version 5.0, Lollipop, initiated the gigantic coat of paint operation. Animations and motion were put front and center, as well as colors, cards, and a series of other things that in a way looked and felt intrinsically google-y from the start.

It’s been almost two years now, and Android finally looks much more mature, cohesive, and overall just plain gorgeous. Most of all, third party developers have finally found a comprehensively written, conveniently located place to refer to when dealing with their app development, which sparked interest and ultimately brought a series of beautiful apps, both big names and small teams-led works. Especially when compared to iOS, Android apps don’t feel like second-class citizens anymore, and look like native efforts rather than afterthoughts or rushed portings. There’s still a long road ahead, of course, but at its root, Android’s design problem has been largely fixed.

There’s still a long way to go, but at its root, Android’s design problem has been largely fixed.

However, trying to take a sneak peek at said road, Google’s path for Android seems everything but certain.

If ultimately Google’s core problem with Android up until a few years ago seemed to be design, now it’s really hard to pinpoint a major issue they would be almost expected to work on, or at least one that the company can fix alone. Android’s other age-old problem, it is known, is its fragmentation, but between carriers and OEMs, there’s very little that the search giant can do by itself; they already provide for independent, timely updates to their Google Play Services, but the very nature of a horizontally-spread, open source OS inhibits further direct interaction — at least not without shaking trust of the companies that Google is so dependent on.

Version 6.0, Marshmallow, already made me wonder about Google’s vision; there was no major feature introduction, save for the tepidly greeted Now on Tap, and most of the work was conveyed towards polishing and improving upon the more ‘shaky’ Lollipop. And with I/O 2016 just a few months away, I am beginning to ask what Google is planning to do with Android; and that’s not just with the upcoming 7.0, but rather with their overall bigger vision, and a few things came to my mind.

First, they could be working on a much needed optimization of the software for tablets. Android has matured immensely on smartphones, and the on-average generous size of phones nowadays makes the experience enjoyable even on smaller tablets, like Google’s own Nexus 7s, but proper tablet integration is not just borderline bad, but also extremely lacking when compared to the competition.

With two high-end tablets such as the Nexus 9 and more importantly their very own Pixel C introduced in the last 18 months, it’s hard not to believe that Google’s got to have something in mind, and that they’re aware of how poor the current experience is.

Naturally, part of that is due to a lack of third party apps making use of the larger canvases, which makes the problem revert back to a chicken-and-egg type of situation; although Material Design provides all the necessary tools for apps to be easily scalable across different screen sizes, developers just don’t have interest in creating tablet counterparts, which makes the experience less appealing and so on.

Another common point raised in the various Pixel C reviews is that the device was to originally come out with Chrome OS instead of Android on board, but the company decided to change its plans almost at the last minute, resulting in the weird performances of the on-paper powerful machine. Rumors started to make their way to tech blogs of a potential interest for Google to merge the two systems, or rather bake Chrome OS into Android, allowing the former to take advantage of the countless apps present on the Play Store.

How exactly that would come into play is unclear, as is the plan’s actual feasibility itself, but such a move would almost certainly have a beneficial effect on tablets, a category that in its slowly fading is giving way to 2-in-1s, of which a properly software-supported Pixel C could indeed be part of.  However, given that the vast majority of Android users enjoy their OS on a smartphone, we’re left to wonder what else Google may be cooking for the upcoming release of Android ‘N’. 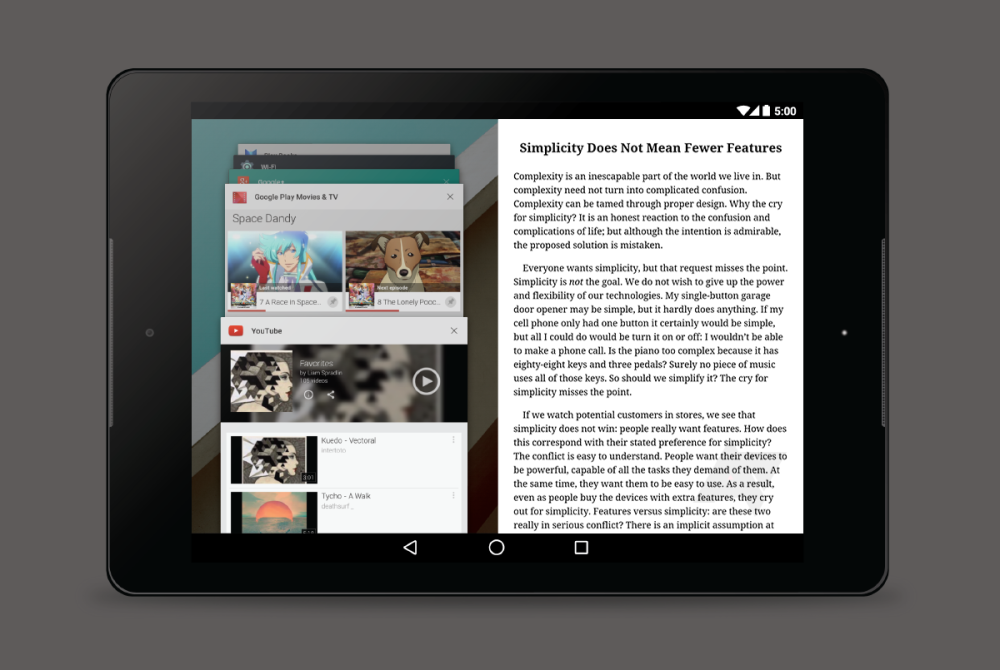 One rumored feature, which is more than likely to make its way, is the longed-for official support for split-screen. Other than reinforcing the idea that Google is indeed working towards expanding Android’s feature-set for tablets, a split-screen mode – which was already being tested in previous versions, albeit being very unstable – would finally bring a loved feature to many more devices, other than top LG and Samsung phones.

Google has already said that this feature is in the works. “We’re working on lots of things right now for N that, of course, we wish we had, you know, yesterday. But we’d spoil the surprise of N if we shared all of them. Split screen is in the works,” said one member of the Pixel C team in a Reddit AMA.

With screen sizes often hovering above 5” and more, having two apps run simultaneously could increase productivity in a significant way on one hand, and simply let simple things be done more easily on the other, such as texting while watching a YouTube video, taking notes while watching a photo slideshow and so on. It doesn’t work great on phones in the implementations we’ve seen from many Android OEMs, but on tablets it seems to just make sense.

Another trend we may not be too far from witnessing is the arrival of pressure sensitive screens on Android devices, which following the success of the iPhone may start implementing a similar technology in 2016 already. To an extent, Huawei has already done that with its Mate S, but a proper Google-backed, Android-based integration would allow many more OEMs to work on the same ground, and have it functioning on a deeper, system level as well as within third party apps.

Despite the work done with Doze, the feature in Marshmallow which helps devices to consume significantly less power while being unused (like when sitting on a table), it would be nice to see Google addressing RAM management better. Perhaps the company could let the user control more of what can and cannot keep working in the background. Seeing performance improvements all around Android would be great, especially on Google’s self-proclaimed “pure” Nexus phones.

Among the few things Google could fix there’s also Hangouts

Among the few things Google could fix there’s also Hangouts, and really the company’s messaging situation in general. Hangouts has gained and then lost its leadership among Google’s messaging services, now sharing the place with a generic “Messenger” SMS app which only creates confusion, in my opinion; I would much rather see a better version of Hangouts then have a second app on my phone (although rumor has it that Google would rather keep things separate). Oh, and getting exposure control (and other camera controls) in the stock camera app would be nice, as well.

However, not willing to further senselessly speculate, there doesn’t seem to be any clue of potentially upcoming features or direction for Android N, and all in all, I believe it would be fair to expect another relatively quiet release from Google, improving on the basics and polishing where Marshmallow ultimately didn’t, while also taking a step further into the the bigger vision for the overall future of mobile. Perhaps Google has something big up its sleeve, but until then, it’s not clear where the company is going.

Let us know what you think about Android N in the comments.