Samsung’s Creative Lab — the group within the company that cultivates small startup-like projects within the larger corporation — has unveiled three new projects here at SXSW in Austin, TX. Among them are a new VR technology called Entrim 4D which lets you more intimately feel the VR content you’re experiencing via electric signals sent to your brain, a collaborative social media project called Waffle, and a music creation app called Hum On!..

The most interesting experience that I had was with the new Entrim 4D headset. Nothing here is different in terms of the Samsung Gear VR-based viewer, but the headset adds a completely new dimension to your VR Viewing experience via the headphones. Beyond just supplying the sound of a normal pair of headphones, though, the Entrim 4D actually adds a set of small pads in the cup of the headset to add a really weird sense of fake movement. You could almost say it intentionally adds a little bit of motion sickness to VR.

I’m not one to have much of a problem with motion sickness when using VR headsets, but the demo that Samsung was showing with this device sent me for a loop. In the demo, you’re placed in a race car going around a track, and the headset alternates between using the Entrim 4D technology and going without. Without the technology the experience felt familiar, but when the Entrim 4D effect was added, you get a subtle but noticeable sense that your body is actually moving within the car. 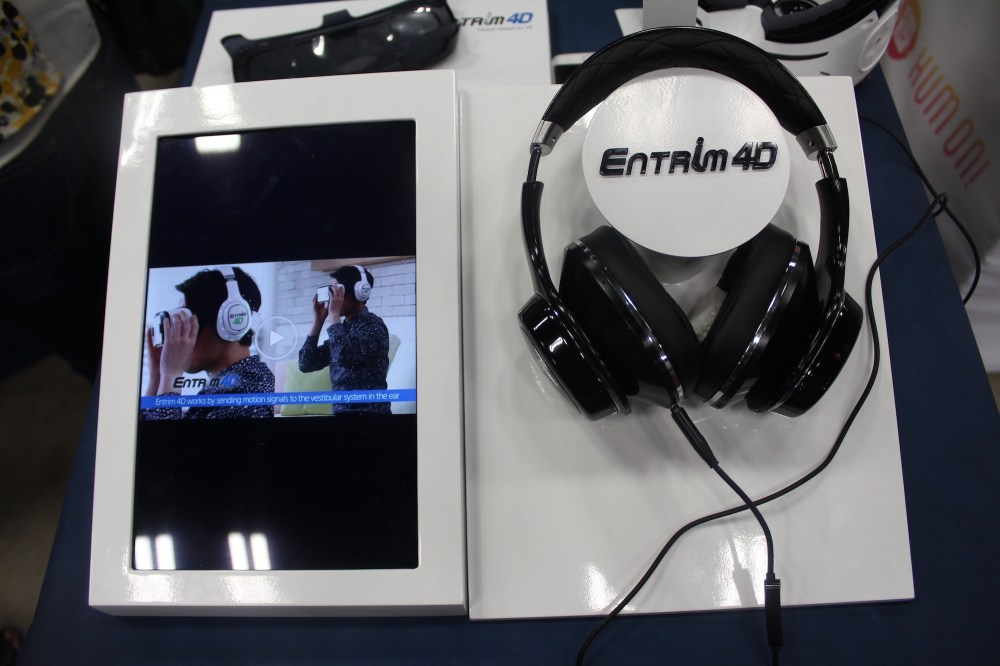 To accomplish this, the Entrim 4D headset uses a technology called Galvanic Vestibular Stimulation that sends electric signals to a nerve on the backside of the ear. Essentially the company wants to bring a 4D-like experience to VR with this headset without the need for the 4D motion chairs commonly found in movie theaters. The team also told me that it is also working on a version of the device that uses other signals to create rotational motion.

Samsung also showed off an app called Hum On! which allows you to easily translate hums into written music. You tap a record button to make the app listen for your hums (and who can’t hum?), and it then transposes this humming melody into a piece of music in a variety of styles. The app features many arrangement styles: R&B, classical, rock, and more.

I think the really attractive aspect of this would be for an artist or songwriter. Of course anyone can play with it, but I can see someone that’s trying to write a song really loving this app. Based on my admittedly limited experience with it (even in a very loud and crowded room), the app did a pretty good job of recognizing the tune that I was trying to hum and playing it back.

As far as we can tell, Hum On! isn’t available on the Google Play Store yet.

Of the three projects that Samsung was showing off today, this was the most confusing. Waffle is a new social media app that attempts to provide a collaborative content creation experience.  As you can see in the video below, the app’s main UI resembles the grid of a waffle. Samsung says that all social media apps currently on the market have one limitation: only allowing users to individually post content. Based on my few minutes of hands-on time today, it seems like a solution looking for a problem, but maybe I’m wrong.

Basically this grid of photos and captions — a la Instagram — can be started by anyone, but the catch is that any of their friends can add content to create a bigger picture. Samsung likens the experience to many different users all contributing to a common graffiti wall. After many users have added their content to this communal feed, the “Waffle” of images comes together to create a completely new image.