Google is apparently kicking off the April Fools’ Day jokes super, super early this year. As has been noticed by several Android developers (via Android Police), the company seems to putting a new section called “Reviews from Space” in the developer console. The review, as you can see above, comes from one “Alex Scott”, sports 5 rocket ships, and was written on April 1st, 2029. Oh, and the device and physical conditions of the user are hilarious, too…

Apparently, the person who left the review (Alex Scott) is using a Google-made Nexus Space phone with an unknown CPU make and model. The screen size is known, however, at a nice 2:3 ratio and with a screen pixel density of 500 ppi. Scott seems to be using Android Marshmallow and the phone he’s using has a huge 128GB of RAM. That’s 32 times more than the typical measly 4GB of RAM that flagship phones have today.

As for Scott’s physical conditions, he’s at 400 km orbit height and traveling at a velocity of 27,600 km/h. Gravity, obviously, is seemingly “not detected.”

I think this is a hilarious gag, but isn’t a bit early for April Fools’ jokes? I mean, we’re still a solid week away. I know Google is known for going above and beyond with the pranks, and I guess it’s possible that someone just accidentally pulled the trigger, but come on, Google. This is a great gag, though— hopefully the developer of Habit Tracker: Goals & To-do’s will be able to better support Space Design and earn that 6th planet! 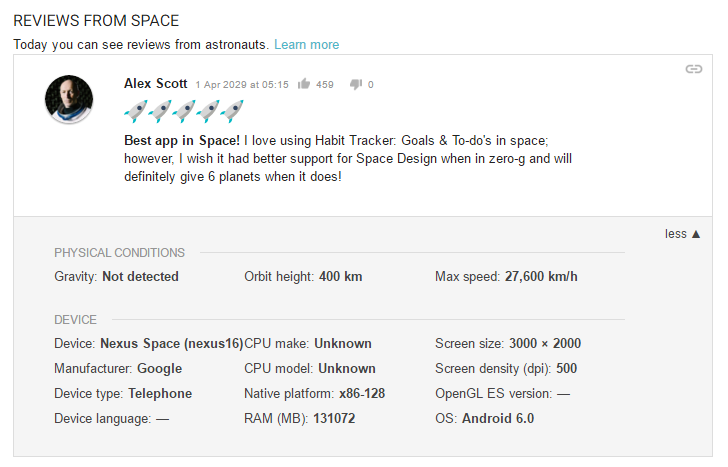