Nearly six months after release, Android 6.0 barely reached 2% usage in March. Helped by flagship devices and OEM updates from Samsung and LG, however, Marshmallow adoption has doubled in the past month.

Marshmallow is now at 4.6% adoption in the latest Android Distribution data, up from 2.3% last month. Besides the release of the Galaxy S7 and S7 Edge, Samsung and US carriers have been pushing Android 6.0 to last year’s flagship devices. LG released the G5 at the beginning of April and last month updated the LG V10. These numbers are compiled from Android devices that accessed the Play Store in a seven-day period ending on April 4.

While Lollipop dropped .3 percentage points to 35.8%, it is still the most widely used version of Android. KitKat is down to 33.4% and Jelly Bean is at 21.3%. Ice Cream Sandwich fell a .1 percentage points to 2.2%, while Gingerbread and Froyo stubbornly remain at 2.6% and .1%, respectively.

Smaller device makers like OnePlus and Nextbit are readying Android 6.0.1 for their devices, while BlackBerry just announced a beta program for the PRIV with a full roll out by late April/early May. Meanwhile, Sony’s Marshmallow push was halted earlier this month due to an issue with the Play Store. 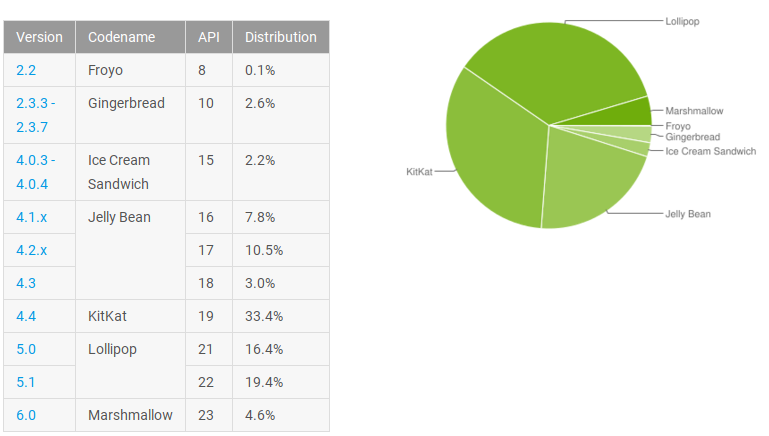