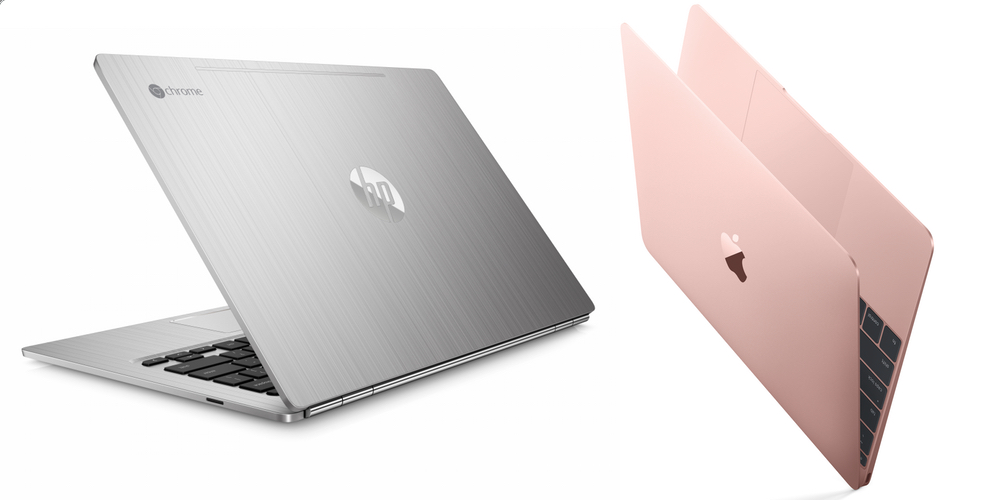 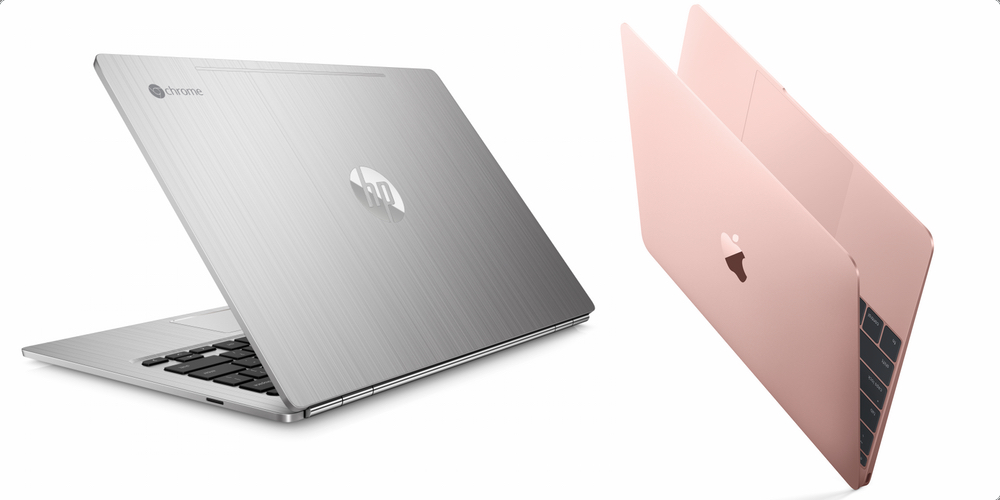 A short while ago, Google and HP announced a brand new metal-clad Chromebook which boasted some impressive specs, including the powerful, efficient Core M chips from Intel, high resolution screens, generous RAM and more than one Type-C port. In a lot of ways, this is the more affordable laptop the Pixel should have been, and will give the Dell Chromebook 13 a run for its money. But how does it compare to the other Core M laptop; Apple’s latest 12-inch MacBook?

Clearly, from looking at all the hardware specifications of the two notebooks, there are plenty of similarities between them. Both are available with Core M3, M5  and M7 processors paired with the Intel HD Graphics 515. Both are made from metal, and both also feature 802.11ac Wi-Fi.

Because of their differing screen sizes and aspect ratios, the Chromebook is noticeably wider and deeper than the MacBook, but surprisingly competes pretty well with the MacBook’s thinness, and that’s despite the plethora of ports.

While the 12-inch MacBook is often lambasted for only having a single Type C port and a headset jack, the HP-made Chromebook squeezes in two Type-C ports, one USB-A 3.1 port, an SD card slot and the 3.5mm input/output.

Of course, the MacBook has a lot going for it. First off, it runs a “proper” computer operating system, while many still see Chrome OS as a glorified web browser with some added real-OS-like features. That means, as standard, the MacBook comes with a ton more storage space. Regardless of which spec Chromebook 13 you get, you only have 32GB internal storage, whereas Apple’s Retina notebook has either 256GB or 512GB flash storage.

But for those consumers looking for a powerful laptop for no other reason than creating documents, web browsing and staying in touch with friends and family online (like a lot of MacBook buyers will be), the Chromebook is a very capable alternative.

The 1080p display on the base Intel Pentium model may be sharp, but it won’t compete with the MacBook on the resolution front. That said, all three Core M variations have an impressive 3200 x 1800 resolution screen. In terms of pixel density, that’s around 50 pixels-per-inch more than the MacBook. That’s without mentioning that fact that even the most expensive Core M7 model is cheaper than Apple’s base MacBook.

With the Core M versions of the Chromebook starting at just $599, you could buy two M3 Chrome-powered notebooks for the same price as a single M3-equipped MacBook, and still have $100 spare.

As a minor bonus, at 45w, the included power adapter with the Chromebook delivers 16W more power than Apple’s Type-C equipped charger too. Check out the spec differences below, and let us know which you think is the better value machine.