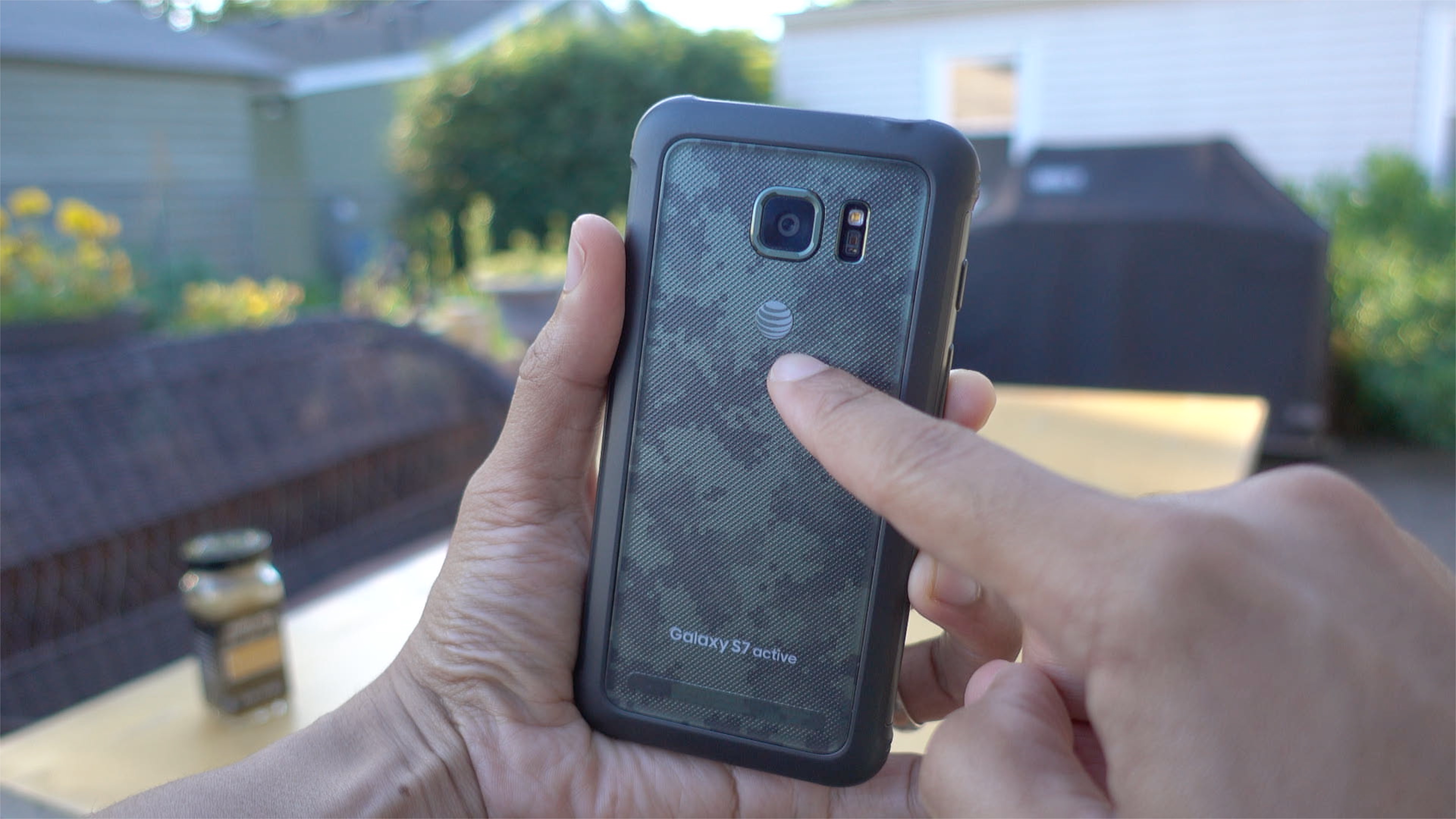 Over the last fews days, I’ve had the chance to use the Samsung Galaxy S7 active as my daily driver. Like the previous entry into the “active” line, it’s the rugged version of Samsung’s current flagship, the Galaxy S7, and is an AT&T exclusive.

With this in mind, sleek design and visual appeal take a back seat to durability, battery life and tactile response. If you’re a Samsung fan who’s constantly subjected to harsh, rugged environments and terrain, then the Galaxy S7 active is the version of company’s flagship efforts that you’d be wise to consider.

The most obvious difference between the Galaxy S7 and the S7 active is the design. The two phones are polar opposites in this area.

The Galaxy S7 featuring a slim build, full glass panels on the front and the rear, and a metal band with subtle chamfered edges wrapping the perimeter. The Galaxy S7 active, on the other hand, eschews much of the glass and metal, and introduces a large helping of polycarbonate into the picture. It’s almost as if you put the Galaxy S7 into a case, and fused it together into one single piece of phone. As a result, it’s noticeably taller, thicker, wider and heavier. 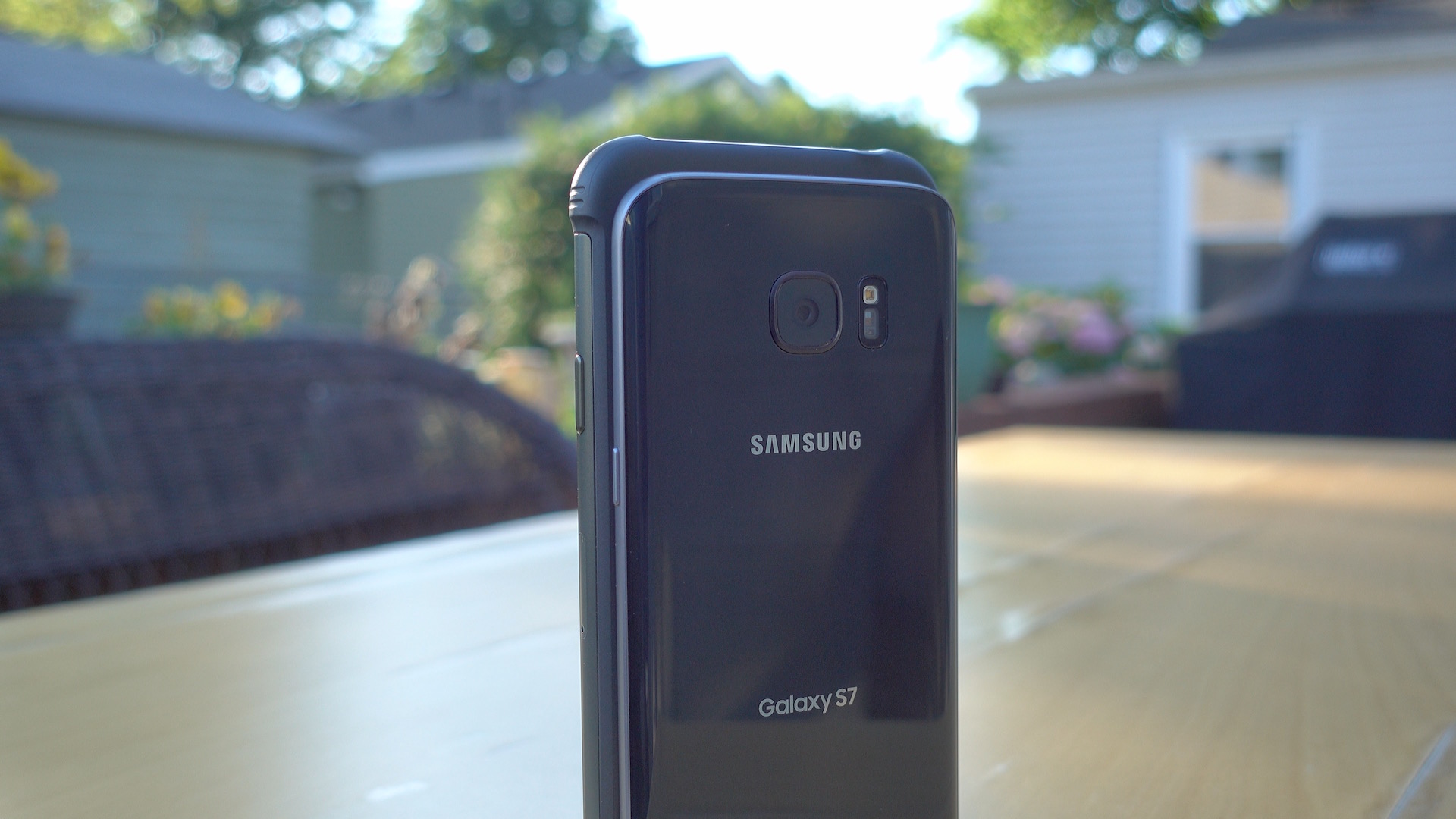 Instead of the all glass rear panel found on the Galaxy S7, the S7 active features a dimpled polycarbonate design flanked by a tough rubber edge. On my particular model, Samsung again goes with the familiar camouflage theme, this time with a dark green tint. For those of you who prefer a look that’s less militaristic, the S7 active will also ship in Gold and Gray varieties. 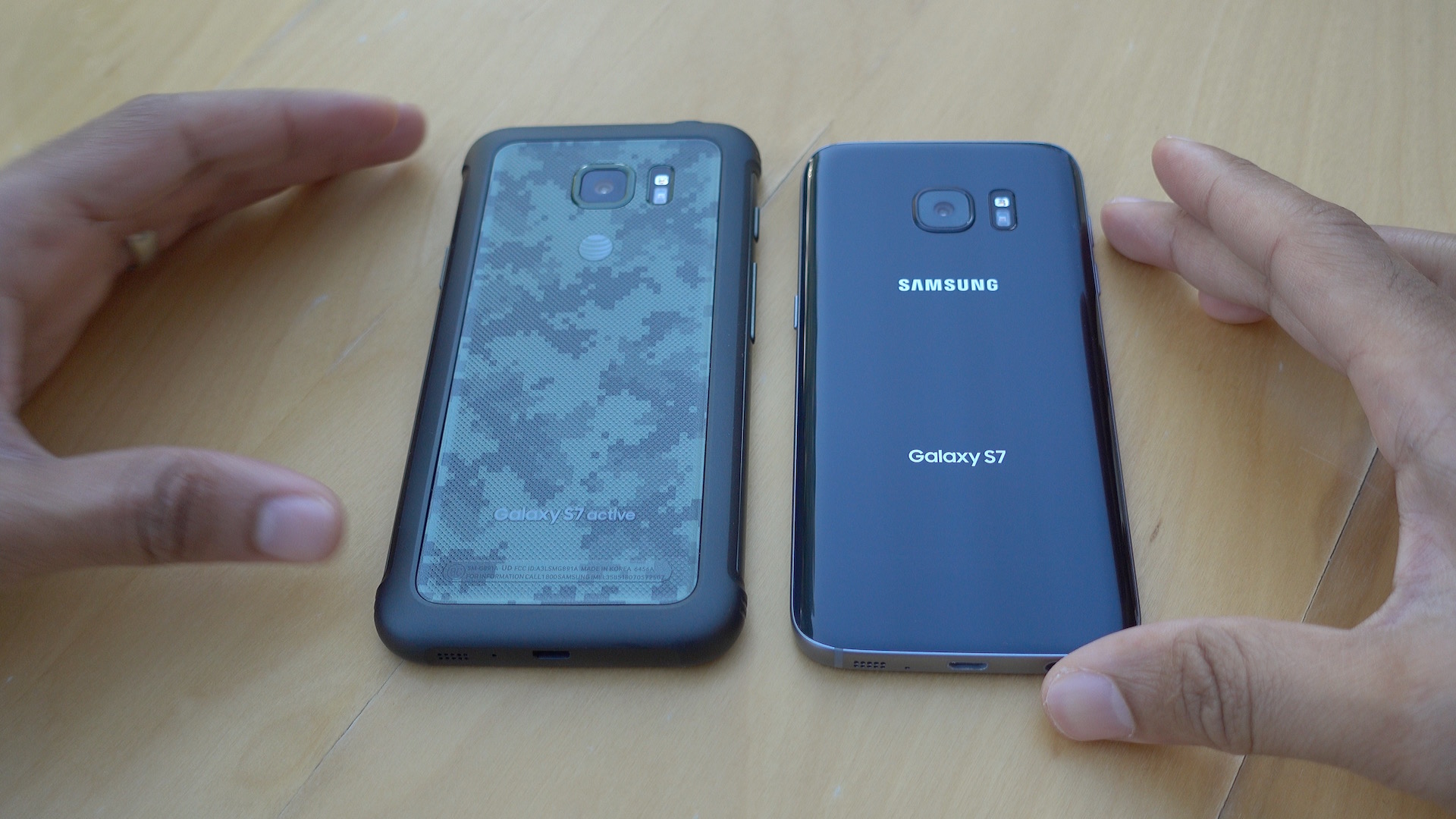 The end result is a phone that feels solid, certainly more substantial protection than the regular Galaxy S7, but the protection comes at the expense of aesthetics, thinness and weight. That said, you don’t buy a Galaxy S7 active because of its good looks, though this version looks a lot better than last year’s model.

One could argue that the need for an active version of Samsung’s flagship phone is reduced by the presence of IP68 water resistance in the Galaxy S7. Some speculated that the codename for the Galaxy S7 active — Poseidon — might foreshadow an even higher threshold of water resistance for the more rugged edition of Samsung’s popular smartphone line. 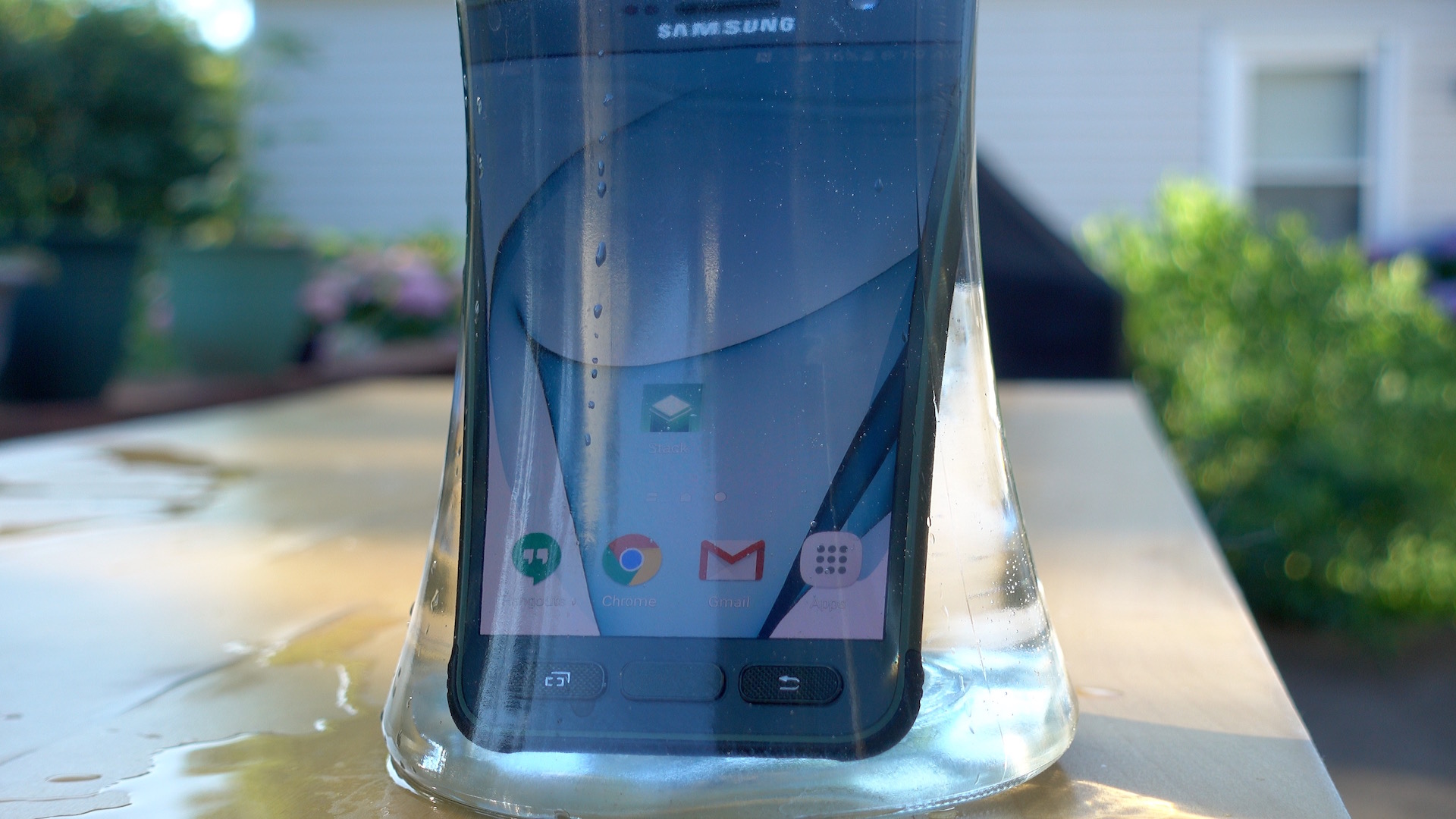 As it turns out, the Galaxy S7 active maintains the same IP68 rating of its more svelte brother. That translates into water resistance that can withstand submersion up to 5 feet for up to 30 minutes. I, too, was hoping for a higher level of water resistance in active, but IP68 is still a really good water and dust resistant rating that will be suitable for most real world scenarios.

Samsung says that the Galaxy S7 active’s screen can withstand a drop from up to five feet thanks to its shatter resistant screen. Five feet is a fairly substantial height for a falling smartphone, so I imagine this will go a long way towards reducing screen breakage. 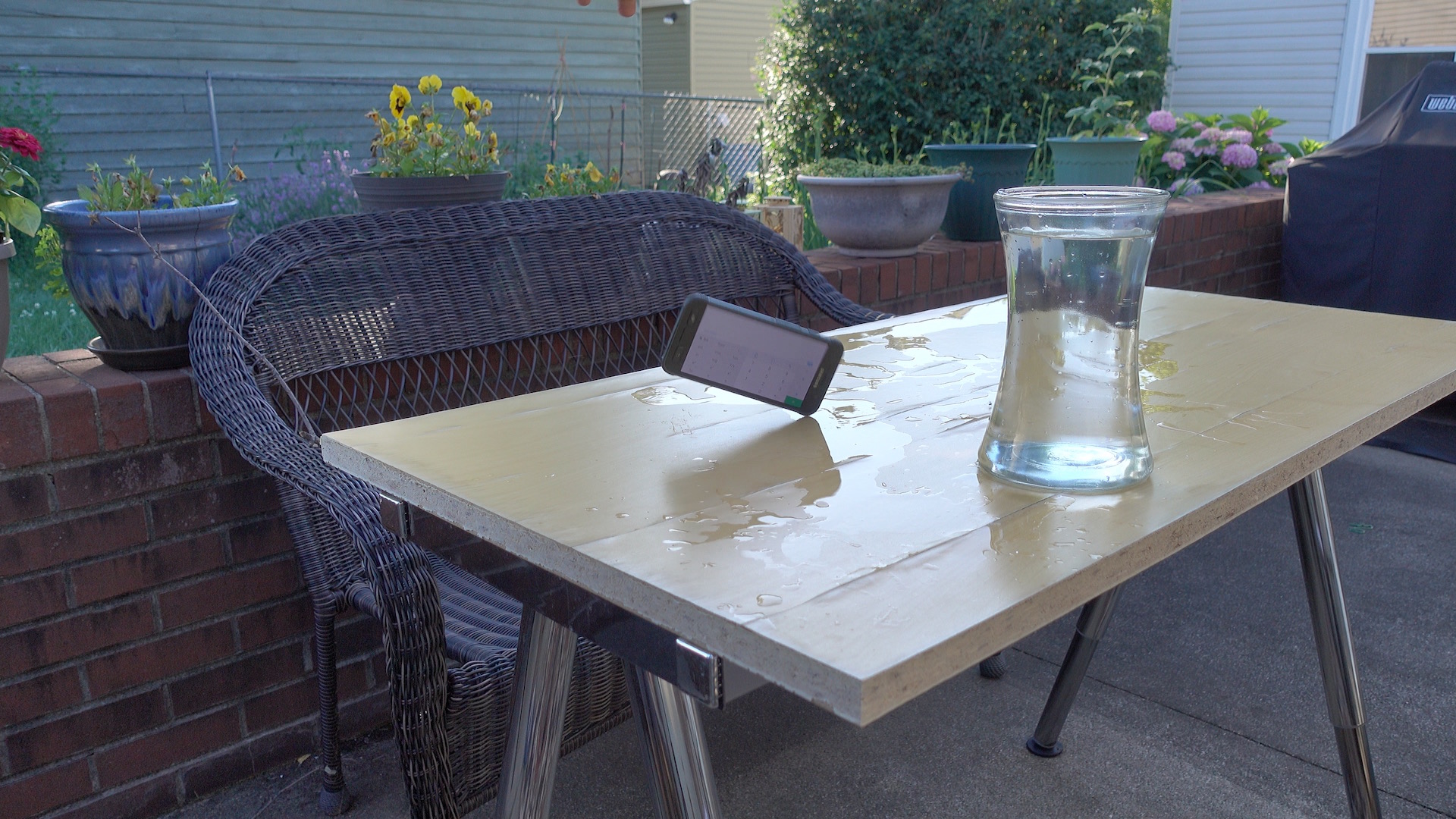 Not only is the screen stronger, but the corners of the casing feature beefed up protection that helps reduce shock. The screen may be shatter resistant, but it’s getting plenty of help from the rugged and durable body that it’s resting in. 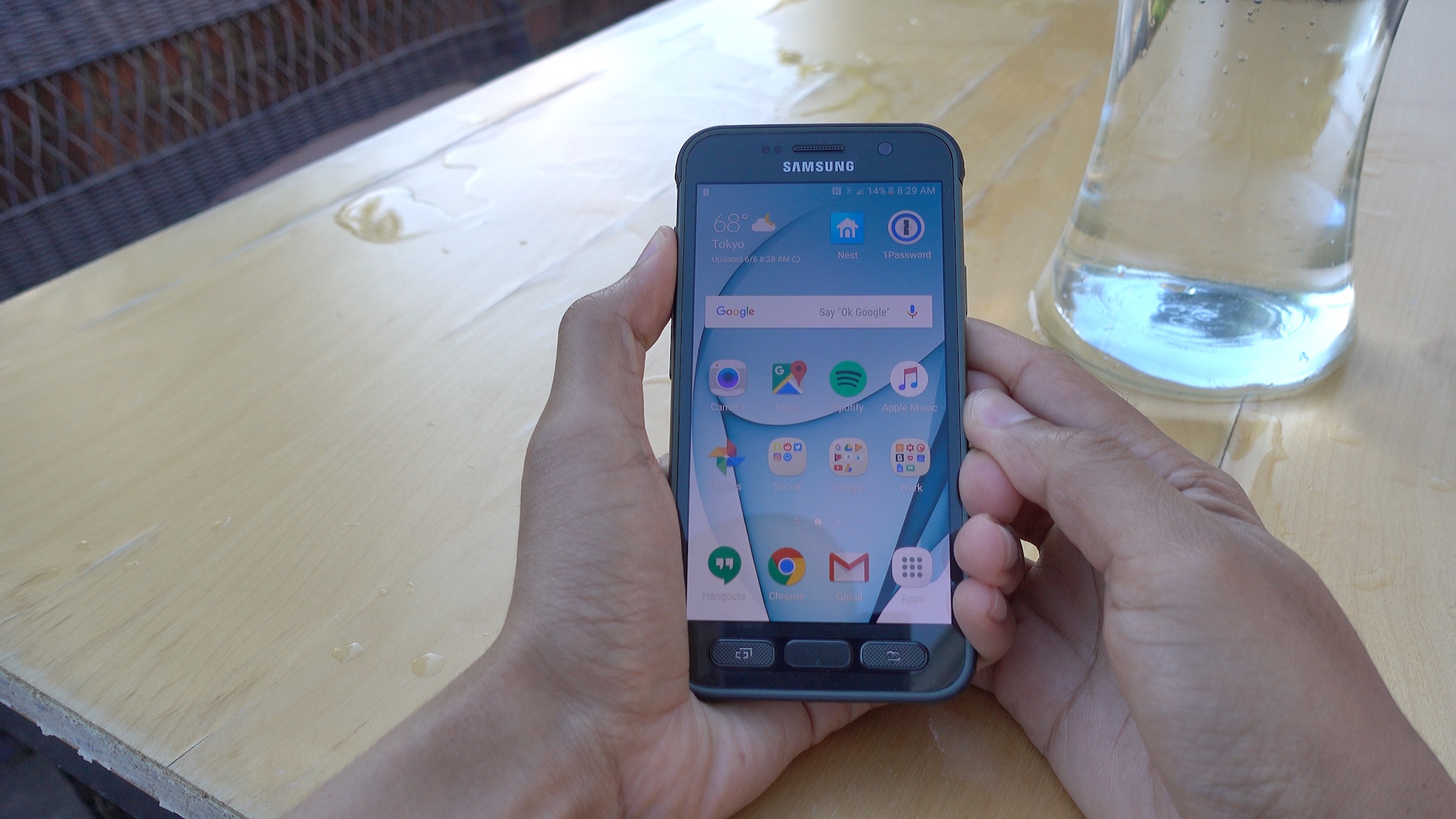 Needless to say, the S7 active’s battery is 33% larger than the battery found in the regular Galaxy S7, and that’s going to offer substantially longer life. Depending on how you use your smartphone, it may offer the true all day battery life that Samsung touts in its press materials.

Like the previous Galaxy S6 active, the S7 active features an extra Active key button for quick access to utilities in Samsung’s Activity Zone app. The Active key, located just above the volume rocker on the left side of the handset, can also be used to launch user-specified applications.

In all, the Active key can be used with a short press, long press and double press action. You can also use the Active key to open apps while the screen is locked. 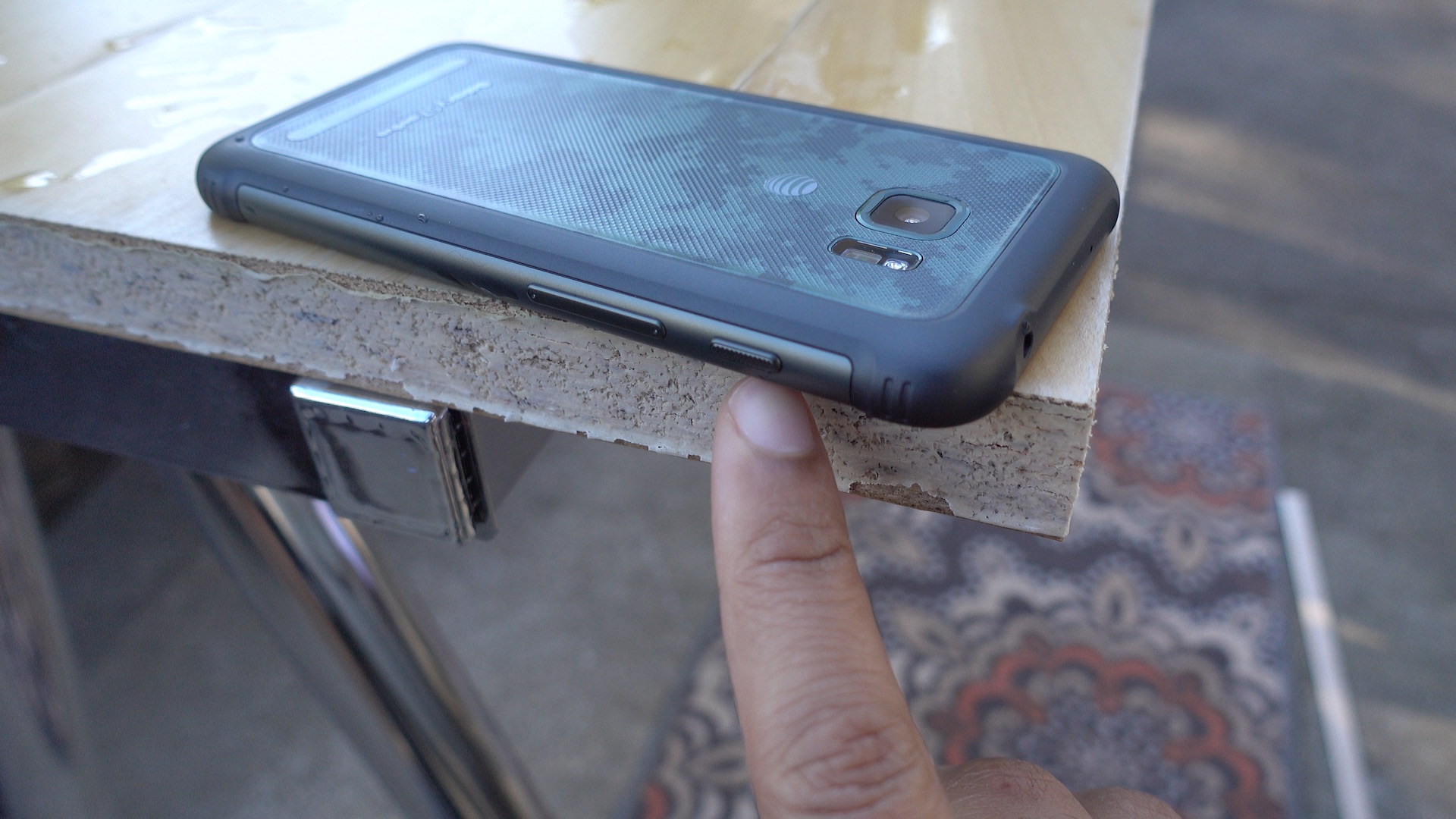 Speaking of buttons, the S7 active replaces the capacitive back and recent buttons, found on the standard S7, for textured tactile buttons. And the individual volume-up and volume-down buttons have been replaced with a single volume rocker button.

While we’re on the subject of design changes, I wanted to note that the 3.5mm headphone jack appears on the top of the S7 active, while it appears on the bottom of the standard S7. I know that some people can be pretty particular about the location of the headphone input, so I figured it was worth mentioning.

Outside of the obvious design differences, the Galaxy S7 and the Galaxy S7 active are very similar beneath the skin. For instance, the S7 active features the same Snapdragon 820 processor (US version) and 4GB of RAM found in its sleeker looking brethren.

The S7 active is built for people with active lifestyles. It’s a phone that can stand up to much harsher outdoor conditions and environments, and it doesn’t need a case in order to do so. It’s also a phone with incredible battery life, the most ever for a Samsung-branded smartphone.

In my opinion, the S7 active is much better looking than last year’s model. It features a simplified rear, improved front face buttons, and an overall design cohesiveness that showcases the line’s growth.

Of course, these are just the initial hands-on impressions. Stay tuned for follow-up coverage once we’ve had additional time to put the S7 active through its paces.